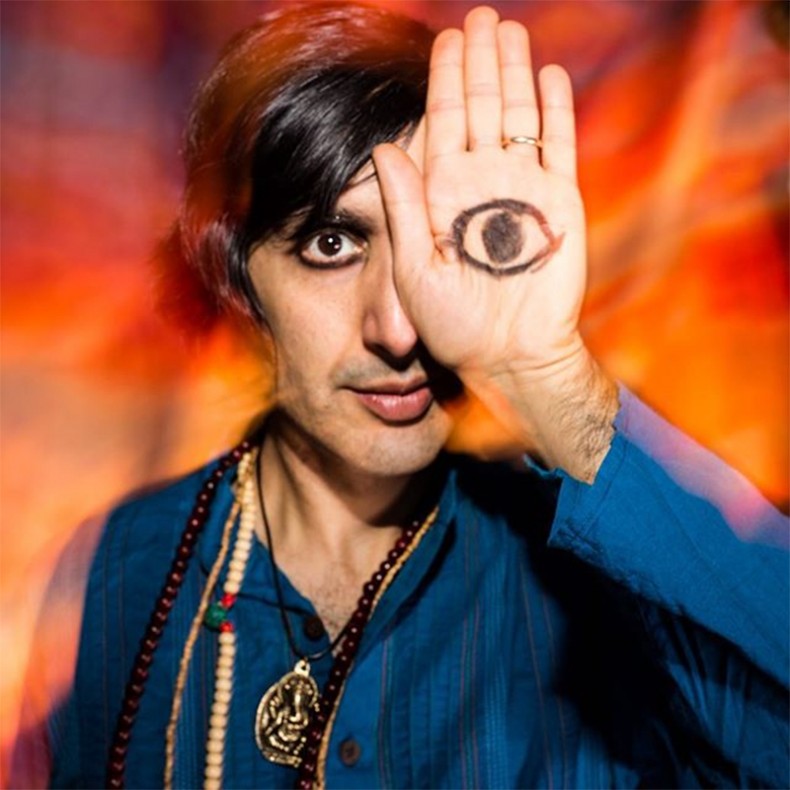 The night begins with a long drag of a cig while I wait outside Sneaky Dee’s, people-watching and anticipating the evening. I chat about what to expect from the show and how good those Classic Sneaky Dee’s Nachos sound right about now. Doors pop open at 9:00 so I stroll in around 9:30. After a quick dip over to the bar I patiently watch the upcoming act set up and people slowly start filing in from the street.

The upstairs venue is a fun one, its narrow, dingy and matches the general Sneaky Dee’s ambiance. The lighting is simple and often lights up a portion of audience with the inevitable intimacy of the stage. On each side of the stage are two super sonic bassy book ends capable of rattling the windows which blast their way through the rocking ground to the bathrooms in the back.

After a brief chat with the sound guy I wish him a good night and wait as the first act is about to start. Bad Girls takes the stage. Little more than a year in the game, these Toronto boys start off the show. It was a modest set and as for most small venues there was the unavoidable invisible line between the audience and the stage (because heaven forbid you get a good spot for that thing you paid to see). I take the opportunity to snap a few pics then go back to listening and nursing my beer. After a song or two they look more comfortable and the audience warms up as more people hit the floor.

After a short break of equipment changes Champion Lover hits the stage. Not being familiar with them initially, they nailed it. The high-energy punk rock ensemble played like it was their last show. Good luck trying to lean on a wall for these guys; they had the crowd moving and moshing and were visually a wild and eccentric bunch. Belting out choruses, jammed in with heavy drum fills and distorted guitar fuzz. These guys fit right into what makes Sneaky Dee’s what it is with that “Don’t hassle me I’m local” vibe. From fuzz pedals attached to guitars, intense facial expressions, duct tape patches, banging the sh*t out of a guitar with a drumstick to the nonchalant instrument toss, these guys sure could keep your attention. After their action-packed slap in the face of a set the energy of the room definitely picked up as we anticipated the headline.

Another beer to stay hydrated and I begin talking to a friend about the previous act and the interesting/contrasting choice of lineup over all. By now time is insignificant as Elephant Stone takes to the stage. They start the psychedelic experience with a dose of “Heavy Moon.” Chronic sways are induced as distorted guitars begin followed by the echoed vocals of Rishi Dhir begin piercing through the room. “The Devil’s Shelter” is next, a little more upbeat in rhythm but still under the properly coined Hindi-Rock movement. As the song finishes up, the lyrics “The devil lies in your shelter. The devil hides within view. What you gonna do?” the songs fades off. One of their newer pieces, “Andromeda,” begins and immediately brings to mind a clear experimental The Beatles influence with lots of little musical layers including various twangs, angelic chords, bongos and even radio signals blended in.

They played a variety of songs from their trippy repertoire. As the audience gets swept into a musical trance of soothing sounds it becomes clear that these guys know how to dish out the psychedelic rock. The heavier bass riffs of  “Child of Nature (Om Namah Shivaya)” stands out, track booming through the Sneaky sound system. It’s easy to get lost in the music but with a good ear you can hear the well-written lyrics on tracks like “Three Poisons” and “Knock You From Yr Mountain.” Compared to songs like “Where I’m going,” which has a fun dancey bass line complemented by Dhir’s tantalizing tones that invoke more movement.

But what I’ve truly been waiting for is about to take flight. Rishi leaves the centre stage and takes his throne of decorative fabric to the left. The mighty sitar is out in all its glory for all to see and is an immediate eye-grabber, especially to those not familiar with the eastern instrument. “Sally Go Round the Sun” plays through and if there was anyone who could shred a sitar it would be Mr. Dhir. The show finishes with the seven-and-a-half-minute masterpiece “Don’t You Know.” It starts slow and somber and works its way up with crisp clean drum fills and kaleidoscopic sitar riffs that bring up the song’s stride. It brings you through a wave of emotions that build up throughout the song and, it ends with the buzzy hum of a guitar that fades off into the distance. The audience gets transported back to Sneaky Dee’s after the experimental mind-expanding music that is Elephant Stone. Overall, it was a great show and left the audience pleasantly Elephant Stoned (couldn’t resist). I would love to see them at a larger outdoor event with some summertime sunshine. They are easily one of the modern psychedelic greats and could be compared to bigger acts such as Tame Impala or The Flaming Lips and are worth checking out if you want to go on a visually musical voyage. I can’t wait to get home put on some good headphones, close my eyes and treat my ear canals with some more trippy Elephant Stone tunes.

by SPILL NEW MUSIC on February 12, 2016
Release Second Single From Upcoming Ship Of Fools LP Elephants On Parade Formed in Montreal in 2009, Elephant Stone is the brainchild of vocalist, bassist, songwriter, and sitar player, Rishi [...]