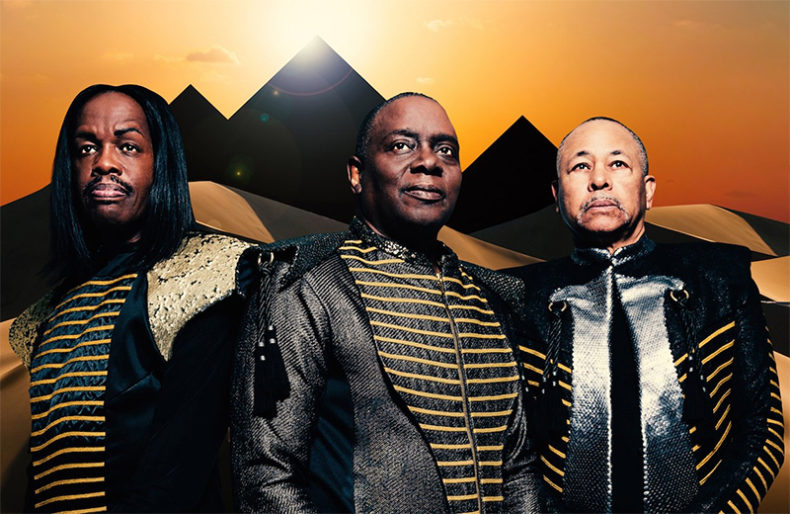 The unforgettable, funky futuristic concert opened with CHIC singing “Freak Out,” “I’m Coming Out” and a nice extended version of “We Are Family.” They then honoured Nile Rodgers, who was watching remotely, by playing his Grammy award winning collaborations David Bowie’s “Let’s Dance” and Daft Punk’s “Get Lucky” to a stadium filled with twinkling cell phone lights. Rodgers, a superstar, who has worked with such names including Madonna, INXS, Duran Duran, Sister Sledge and Diana Ross, was recently honoured with an Award for Musical Excellence from the Rock and Roll Hall of Fame. After “Good Times” with a rap interlude from “Rapper’s Delight,” CHIC waved an enthusiastic crowd good night.

At 9:30 pm, the lights dimmed again. Pyramids, comets and lightning flashed across the stage screen and a booming voice echoed above: “Something that had the power to heal, to touch the world …was music. Through the power of music, people could find the light in themselves. And in that light formed the elements”. A laser space ship lowered to the stage. Out of the shadows the award winning galactic Chicagoans walked out, donning blue and yellow sequin suits – the newer members wearing pants with white stars.

The original Earth Wind and Fire members in the tour were Johnson (vocals, percussion), Bailey (vocals, kalimba, conga and percussion) and the still ever funky Verdine White (bass, percussion and vocals) whose white smile, long hair and epic sparkling duds danced around a stellar band that included Philip Bailey, Jr. who sang lead on some songs with his father.

Earth Wind and Fire opened their 90 minute set with a medley of their beloved, funky classics including “Shining Star,” “Getaway,” “Sing A Song” and “On Your Face” before the 11 piece band launched into bass, brass, and percussion solos, and impressive high energy dancing with “Serpentine Fire.” Bailey’s stunning extended solo kalimba introduction of “Kalimba Story” hushed the packed Air Canada Centre along with his epic falsetto-solos in “Reasons.” Here, Johnson explained how Bailey is like a “fine wine that just gets better with age.”

Other hits included “Can’t Hide Love,” “Keep Your Head to the Sky,” their sing-a-long anthem, “That’s The Way of the World,” which featured black and white photographs of the original band behind them on the stage screen and “After the Love has Gone.” The set closed with “September,” “Boogie Wonderland” and “Let’s Groove” until the encore kept the house dancing on their feet with “Fantasy” and “In the Stone.”

The soul and energy of Earth, Wind and Fire remained omnipresent through amazing music and pyramid-infused visuals. The departed band members, including Earth Wind and Fire founder, Maurice White, who joined the great jam session in the sky in 2016, were represented by archival footage of the band in its hey day. Verdine’s smiling and groovy bass moves and Johnson and Bailey’s soaring vocals definitely stole the show, however. It was one for the books.

Talia Wooldridge is an avid music lover, composer and ethnomusicologist who contributes artist interviews, live concerts, festivals and album reviews for Spill Magazine. She has written extensively on the intersection of music, personal identity and cultural symbolism with an early focus on Latin American Hip Hop and female Cuban rappers. In her spare time, Talia writes, composes music and manages Music Can Heal, a non-profit that brings live, award-winning musicians to inspire healing in hospitals, hospices and communities in need. Her next project is an interactive music-travelogue exploring music cultures and music travel around the globe. Follow her here: www.taliawooldridge.com + www.movetoyourownbeat.com.
RELATED ARTICLES
chiclive nationlive review
7.0