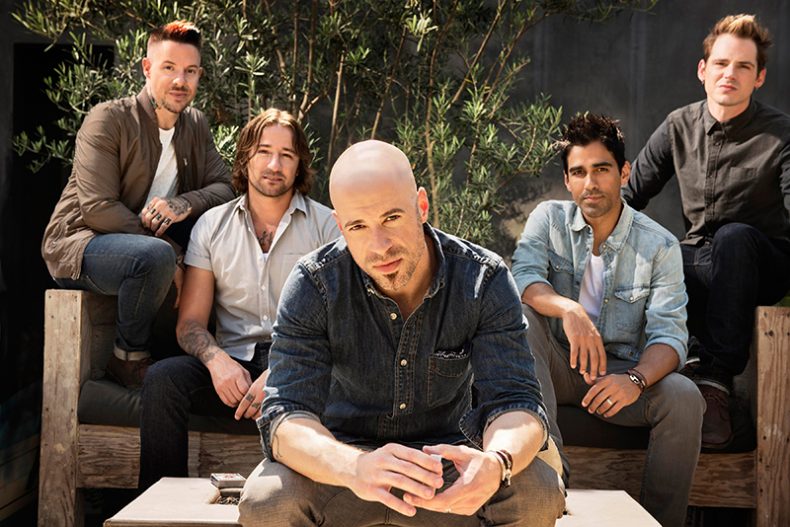 Daughtry  is an American rock band formed and fronted by namesake Chris Daughtry, who was a finalist on the fifth season of American Idol. Their self-titled debut album was released in November 2006. This album reached number one on the Billboard 200, went on to sell more than four million copies in the United States, and has been certified quadruple platinum by the RIAA.

To date, Daughtry has sold over 8 million albums and over 22.6 million digital tracks in the U.S.A greatest hits album, It’s Not Over…The Hits So Far, was released February 12, 2016, with singles from their studio albums and two new songs. On January 29, 2016, “Torches” was released as the lead single. The band made a fleeting visit to the U.K. in May 2016, playing just a handful of shows.

A couple years ago I witnessed Daughtry live for the very first time in Belfast, Northern Ireland, my home country. Having only been familiar with the first Daughtry albums, I had been very surprised by the complete change in musical direction on the band’s Baptized release. Despite the largely female screaming audience those tracks had actually traversed well into a live setting. The band managed to successfully utilize both harder-edged older songs with the newer lighter material. After being subjected to the worst-ever PA set list of songs I had ever endured things didn’t improve for the support act. Although they failed to personally connect with myself and about three quarters of the audience, it was actually good to see that concertgoers had actually made the effort to come in early to witness their set. Looking around me, and the audience was one of the most diverse I had ever seen. A variation in ages is commonplace at live shows, but the vast range at tonight’s Daughtry show was something else. Kids to pensioners and the shirts in attendance varied as eclectically from Machine Head and Slayer to some boy-band and pop artists! A prevalence of females also of an age to “know better” conveyed the reality TV show fan element of the audience.

Like the previous tours’ set lists, a few cover tunes were present in the Daughtry set. I have witnessed many bands play covers over the years to a wide level of reception, from acceptance to intolerance. The choice tonight was a solid one. Longstanding “In the Air Tonight” was joined by homages to both Manchester (Oasis) and the recently departed Prince. Daughtry’s delivery of these actually enhanced the set list rather than detract from it. His connection and unifying devotion of his audience established a connection and chemistry that actually visibly moved the man himself. Many artists bestow platitudes on an audience, which often is just a throwaway comment or two. The genuine appreciation Daughtry showed the Manchester audience in response to their singing back to him on several occasions, however, came across as totally heartfelt and genuine.

I was blown away, what can I say…? Lyrical hat tip aside, what a performance by Daughtry and his band. It has been years – too many years – since I felt the once-familiar thumping bass line that forced my blood to effervesce and pound my organs to the point of rupture. As I write this, I have the reassuring post-gig tinnitus that tells me that I have had a memorable evening and to remind me what my eardrums are for. To say “awesome” is to do the show an injustice; but no superlative, descriptor or adjective can adequately sum up the quality of the performance, which covered the whole of the album range and a few tributes to other performers. I believe I danced (bearing in mind I dance like I am holding on to an electric fence) more than a Welsh choir and clapped more than the entire cast of Sister Act – including sequels – but it’s only skin and it will grow back. Probably. If my real guitar playing is as good as my air guitar, then I am really on to something! Apparently, we were a “badass” audience, which makes me a badass by association – I will take that any day! In the event that Daughtry himself sees this post, thank you, sir, for your inspiration and for making this middle-aged rocker feel just a little bit younger, even for just a little while. Your humility, grace and sheer showmanship are to be applauded. Come back soon. Long live rock, long live roll, long live big guitars and music full of soul…

I'm a 40 + music fan. Fond mostly of Rock and Metal my staple-musical food delights. Originally from Northern Ireland I am now based in the UK-Manchester. I have a hectic musical existence with regular shows and interviews. Been writing freelance for five years now with several international websites. Passionate about what I do I have been fortunate already to interview many of my all time musical heroes. My music passion was first created by seeing Status Quo at the tender age of 15. While I still am passionate about my Rock and Metal I have found that with age my taste has diversified so that now I am actually dipping into different musical genres and styles for the first time.
RELATED ARTICLES
american idollive reviewmanchester