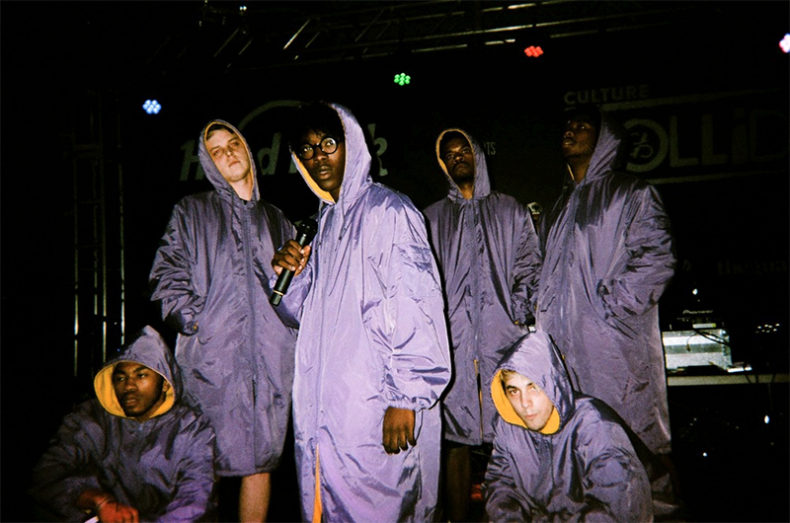 Brockhampton have been making significant waves in the hip-hop scene, from their experimental and unique beats to the flows of each group member. The group consists of Kevin Abstract, Romil Hemnani, Ameer Van, Merlyn Wood, Dom McLennon, Matt Champion, JOBA and bearface. Hailing from San Marcos, Texas the group moved to LA living in one house and making music together all day every day. Saturation, their debut album, was released in June 2017 which brought a lot of buzz to the group as well as critical acclaim. Saturation II  was released at the end of August 2017, creating even more attention for the group. The tour is their first as a group, but Kevin Abstract has previously toured in support of his solo material.

The group opened with immense energy performing the song “HEAT”, a single from Saturation, dramatically “collapsing” after their individual verses. It was evident the group choreographed some of their stage performance as after they got up they began swaying together, and finally forming in a circle with Kevin abstract in the middle as he rapped. This opening sequence was done extremely well, planned but not over-done. The crowd’s response was uproar of energy and enthusiasm for the group.

Brockhampton continued to give all the energy back to the crowd as they performed most of Saturation and Saturation II. The crowd was highly responsive and the group took advantage to the fullest. The crowd being engaged helped the group by responding to every chant, direction and conversation. Brockhampton was very excited to be in Toronto, saying that this was their first tour and they loved the energy of the sold out crowd. A highlight of the show was Kevin announcing he was going to play an unreleased track, to which the crowd was overjoyed. Some controversial subject matter was brought up in the song about Kevin’s sexual orientation and how he feels about it, which the crowd noted and shown mixed responses about.

The performance ended first with bearface demonstrating his guitar skills live with the songs “WASTE” from Saturation and “SUMMER” from Saturation II, both closing tracks on each album. This emotional, intimate performance left the crowd stunned but a little underwhelmed as they had not played their most popular song, “STAR”, yet. The crowd chanted encore until the group came back out on stage to give the viewers what they had been waiting for. Brockhampton proceeded to play three times, claiming each time that “y’all can do better than that”, referring to their energy and chanting so they played it again. After this it seemed like the show was over. After about 10 minutes when everyone started leaving, Romil, the assigned DJ for the night, ran back out on stage telling everyone to come back and they still wanted to play because the crowd was so awesome. They then repeated  “STAR” 3 or 4 more times, the crowd getting crazier and crazier with each replay.

This performance put forth by Brockhampton was amazing. As a new group of young individuals, they plan more than you would think. From specific choreographed routines to their stage presence and crowd responsiveness they were doing amazing at everything even with minimal props and special effects. Usually, rap shows aren’t too amazing, either too many frills or too bare bones but this was a perfect balance. Brockhampton obviously put a lot of thought and effort into their performance which shows their passion and dedication. Saturation III, the end of the Saturation trilogy, is supposed to drop before 2018 ends and will probably launch the boy band into a whole new league. Each individual is really talented and I expect big things from these guys, so you should definitely check them out.

The Spill Magazine is a Toronto-based online publication dedicated to covering the independent music scene with a strong focus on our thriving hometown talent. Our writers bring you up-to-date news, in-depth features on musicians and reviews for the latest CD releases. We also travel to the front lines for all local festivals including Canadian Music Week and North by Northeast. Don’t forget to check out our Facebook and Twitter pages for all daily Spill updates.
RELATED ARTICLES
brockhamptonlive reviewthe danforth music hall