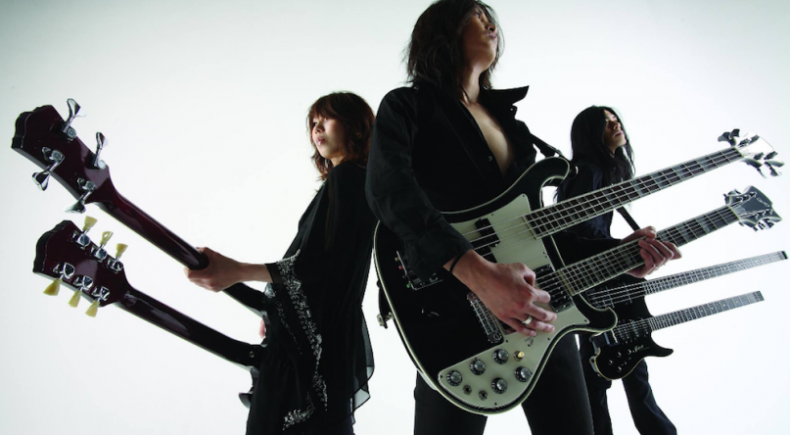 Near the beginning of Boris’ set, when the shrouded Takeshi plucked his ungainly double-necked bass/guitar, I felt something hit the top of my head. No, not the swirly nub of a flicked-on halogen, but tiny white chunks of …plaster? Closer examination revealed that yes, the ceiling of Lee’s Palace (Toronto’s musical Domus Aurea) was in a happy state of dilapidation. And Lee’s could not have hosted, on Thursday night, a band more threatening to their crumbling 1985 architecture.

In light of the power trio’s (see: rhinoceros beetle; silverback gorilla; green anaconda) reissue of Pink (originally released in 2006), Boris have embarked on a lengthy string of shows, performing the entire album, in various Rubik’s configurations, with deluxe edition bonus tracks thrown in for variety.

On Thursday night they opened with the blustery “Blackout,” and pushed on from there with powerhouse, distortion-heavy pieces; here invoking Metallica, there invoking Kyuss, and, at times, embracing the wondrous fatalism of recent collaborator Merzbow.

The speed-Rock of “Pseudo Bread” (during which drummer-vocalist Atsuo yelped on off-beats, whipping the crowd into a frenzy) and the Stoner-Rock incantations (plus eely Wata guitar work) on “Afterburner” were the highlights of the set’s first half.

The ambient soul-scraping “My Machine” gathered the ropes before the double-outro of “Just Abandoned Myself” and “Farewell” sucked all the air out of Lee’s Palace in a dense but sustained catharsis. The monumental oneness of Boris’ sound on “Just Abandoned Myself” and the catatonic flow on “Farewell” proved to be, even in hypothetical isolation, well worth the price of admission.

Whooping chants of “Bo-ris! Bo-ris!” catalyzed an encore featuring two new songs, “Memento Mori” and “Kilmister,” before the trio, thankful to break away from the humidity (maybe those black garbs weren’t so apposite after all) exited stage-right.

Boris’ live show captured, in just under two hours, what their breed of “Metal” specializes in: mutation. Sludge Metal, Shoegaze, Ambient Drone, Noise-Rock, gong-blasting avant-garde hymnal chanting – these are the ingredients in the Boris goulash. Bring your appetite (and earplugs)!

by Nicholas Fazio on July 14, 2017
Boris Dear Daymare Recordings Boris’ Dear is the most “Boris” album Boris have ever made. And, just as the repeated pronunciation of the word “Boris” detaches the moniker from semantic meaning, the [...]
8.0