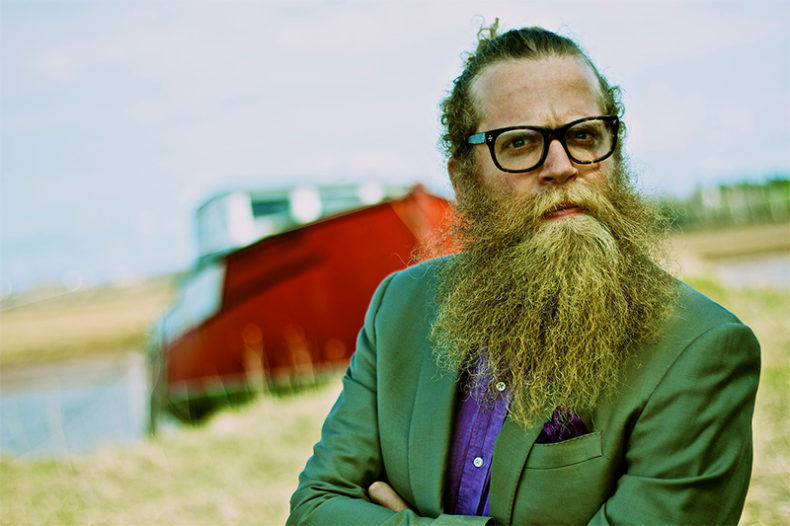 Ben Caplan is a rather unassuming fellow until he opens his mouth. His bearded and manbunned exterior is almost perfectly accentuated by his thunderous roaring voice. This roar quickly ripped through the halls of The Capitol Theatre and arrested the attentions of all who drew near.

Within this intimate recreated theatre the rumble of Caplan’s east coast shanties could be felt. With his booming voice racing clearly across the seats, the audience quickly chimed in and began to sing and clap along. His soulful tunes have gained him some recent acclaim with his latest album, Birds With Broken Wings, serving as the backdrop to this Winter/Spring tour Caplan has sold out numerous shows and has earned some new listeners. Within the lobby fans new and old carried out conversations in anticipation of Caplan’s arrival to the merch table. Among these excited fans were a few new listeners who despite preferring other genres were absolutely enthralled by Caplan’s performance.

Contributing greatly to Caplan’s performance was his touring band. Featuring a small menagerie of instruments these other exceptionally talented musicians fleshed out the sound and created altered arrangements of some of his most well-known songs. With a harmonium providing accordion-like accompaniment many songs had a distinct gypsy-like free-flowing nature about them. With Caplan himself alternating between four different instruments, the general performance of the band was unpredictable and yet persistently intriguing.

As the concert was held in a historically themed theatre lighting and effects were fairly minimal yet effective. The vintage nature of the building fit nicely with Caplan’s folk influenced sound and the intrinsic beauty of the theatre was a delight on its own. This is not Caplan’s first visit to Edmonton yet it was certainly one of his stronger performances in town and the venue certainly contributed to its enjoyability.

Ben Caplan & The Casual Smokers are consistently an exciting band to see. With their soulful folk tune, multi-instrumental musicians, and theatric banter they never fail to entangle an audience in their songs.

I am an Edmonton based musicophile and photographer who loves experiencing music whether it's live or on my turntable. I play seven instruments and go to a lot of concerts.
RELATED ARTICLES
edmontonlive review