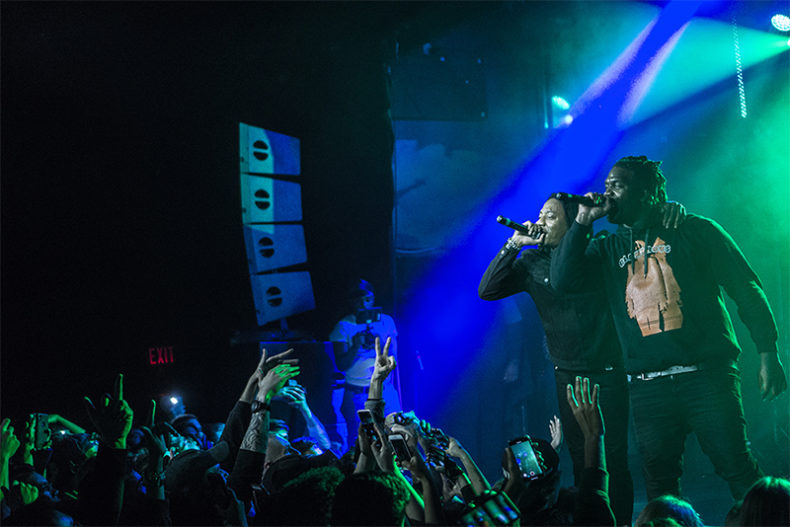 Following in the footsteps of other XO artists Nav and The Weeknd, 88Glam hosted their first headlining show at the Mod Club Theatre in Toronto. The venue was sold out and the crowd was in a trance for the entire night. 88Glam demonstrated a great sense of entertainment through crowd immersion, including the fans, on every song. 88 Camino and Derek Wise made the crowd feel as if they were up on stage performing with them. The duo had the fans on their feet all night at their beck and call. Whether it was the opening of a mosh pit, or when everyone tossed up water in unison, you could tell they were in the driver’s seat all night long. They were later joined by Nav for renditions of “It’s a Flex” and “Bali”, which heightened the crazy atmosphere, as he was not expected to join them. This was eerily similar to Travis Scott’s surprise appearance at Nav’s 2017 show at the Mod Club. I don’t know if anything could live up to a surprise Travis Scott appearance, but Nav took the crowd to another level when he took to the stage. As usual, the venue was awesome: Mod Club has no media pit, and those who arrive early or squeeze through the crowd can get an unbeatable view of the stage. Overall this was a great concert from start to finish; the Glam Boys really know how to put on a show! Their performance exceeded any expectations I had, and I feel certain that we will be seeing more of 88Glam in the future. That is definitely a good thing for any rap fan!