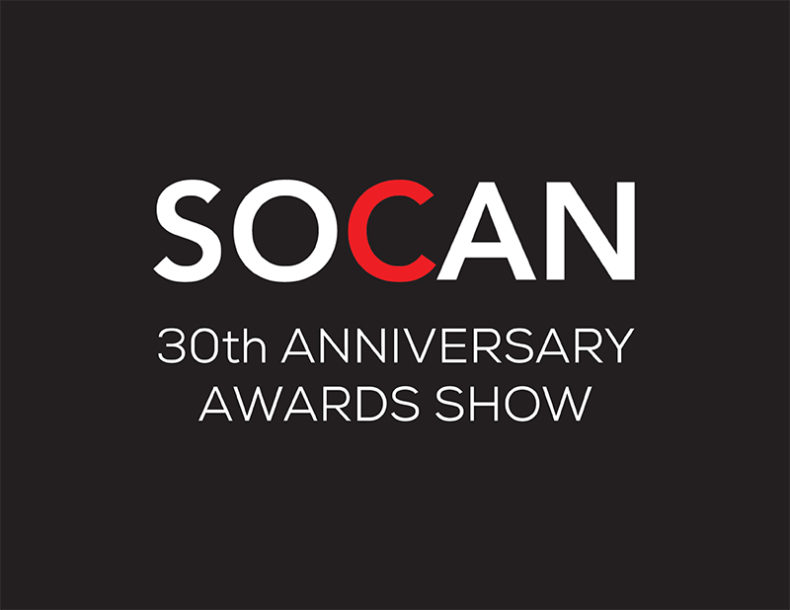 SOCAN is a rights management organization that connects more than four million music creators worldwide, and more than a quarter million businesses and individuals in Canada. Nearly 160,000 songwriters, composers, music publishers, and visual artists are its direct members.

The evening opened with an unforgettable performance of “Call Me Maybe,” written by Carly Rae Jepsen, as well as Josh Ramsay and Tavish Crowe of Mariana’s Trench. The song received the award for Most Performed Song in the history of SOCAN.

Other notable moments of the evening were Sainte-Marie’s induction into the Canadian Songwriter’s Hall of Fame for her life’s work, now spanning almost 60 years. Melissa McClelland, Fred Penner, and Josh Q all delivered unforgettable performances of Sainte-Marie’s “Universal Soldier,” “Up Where We Belong” and “Til It’s Time For You To Go,” while media personality George Stroumboulopoulos made the presentation.

Chad Kroeger of Nickelback scooped up the award for Most Performed Songwriter in SOCAN history, and Ed Robertson of Barenaked Ladies was presented with the Cultural Impact award for the influence that “The Big Bang Theory” theme has had on pop culture worldwide. The audience was treated to a show-stopping rendition of the song, followed by fan favourite “One Week” by Barenaked Ladies.

Songwriter of the Year – Producer was awarded to Frank Dukes, his second consecutive win in the category for his work on hits like “Havana” (Camila Cabello),  “Better Now” (Post Malone), and “Pray For Me” (The Weeknd and Kendrick Lamar). Dukes also took home three awards in the Pop Music category and one in Rap Music.

Jessie Reyez was presented with the Breakout Songwriter award, and received two Dance Music awards for her work with Calvin Harris, Dua Lipa, and Sam Smith. Ralph Murphy was honoured with the Special Achievement Award for his prodigious achievements in songwriting and his lifetime commitment to passing along his great wisdom to aspiring music creators.

For the third consecutive year, Keith Power earned the Composer of the Year award for his work in television and feature films, such as Hawaii Five-0; Heartland; MacGyver; and Magnum, P.I.

And Toronto favourite  Jack Lenz was honoured as the Most Performed Screen Composer in SOCAN history. Over his career, Lenz’s music has been featured in Due South, Designer Guys, The Passion of the Christ and Goosebumps, to name only a few.

Lastly, Grammy-nominated producer Murda Beatz accepted the International Achievement award and an award in the Rap category for “Nice For What,” co-written and performed by Drake. Though unable to attend as he is currently on tour in Europe, Drake received the award for Songwriter of the Year – Performer. He is also busy promoting Top Boy, an original series from the UK now globally available on Netflix. Drake and his business partner Adel “Future” Nur, along with Maverick Carter and Jamal Henderson are the executive producers of ten new episodes.

It was a memorable night, dedicated to the success of Canadian music talent which only continues to rise on the global stage.

Talia Wooldridge is an avid music lover, composer and ethnomusicologist who contributes artist interviews, live concerts, festivals and album reviews for Spill Magazine. She has written extensively on the intersection of music, personal identity and cultural symbolism with an early focus on Latin American Hip Hop and female Cuban rappers. In her spare time, Talia writes, composes music and manages Music Can Heal, a non-profit that brings live, award-winning musicians to inspire healing in hospitals, hospices and communities in need. Her next project is an interactive music-travelogue exploring music cultures and music travel around the globe. Follow her here: www.taliawooldridge.com + www.movetoyourownbeat.com.
RELATED ARTICLES
live reviewsocantoronto