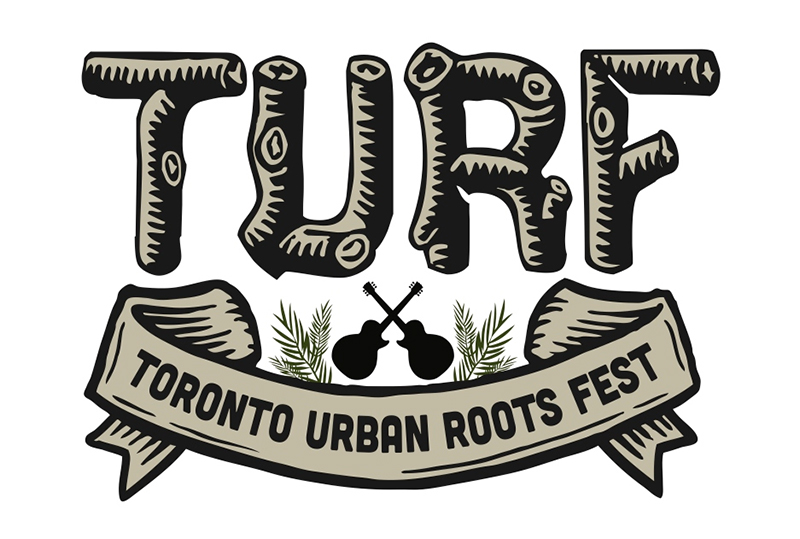 Fun, fun, fun. That was the order of the day for Toronto’s newcomer Modern Space. As a selected participant in Spotify’s Spotlight 2016 program, this is one band that is going places fast. Though there was a small crowd gathered in front of the stage during its TURF performance, it was clear it made a lasting impression with its own personal brand of Power Pop. They came for fun and good music, and that is just what they got. Modern Space is certainly a band to watch.

Highlight: Early comers were treated to a brand-new single, “One More Day.” Thanks for that, guys! Worth showing up early for!

Country songbird Margo Price was the first act to grace one of the two large stages at this year’s TURF. This lovely lady of song was an absolute delight, whether you are a country fan or not. Having released her debut LP on none other than Jack White’s Third Man Records, the Nashville songstress had the audience mesmerized with her lulling harmonious tunes, at other times picking up the pace with toe-tapping, country picking tunes, including a Jimmy Reed cover.

Highlight: Her lulling, heartbreaking performance of “Give Back The Key To My Heart” 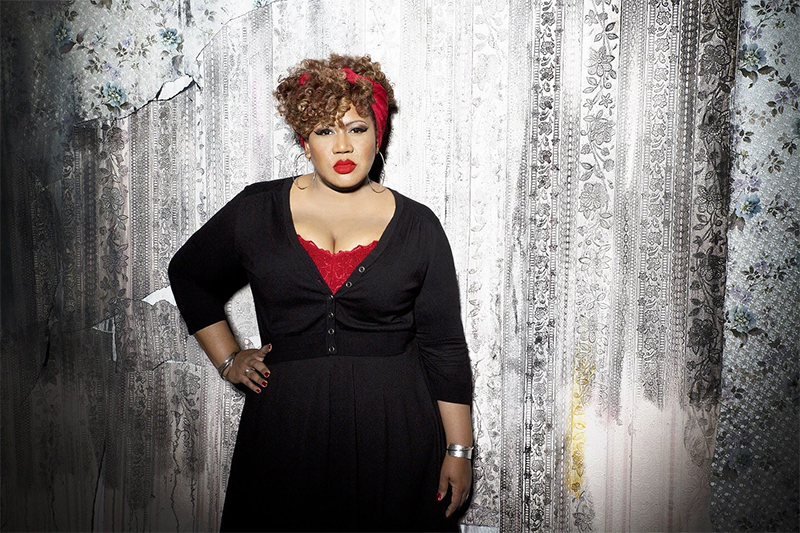 Toronto’s powerhouse Simone Denny was the first act to break the turf at this year’s festival, and what a bang it was! The Juno Award-winning vocalist hit the stage fronting a band with a total of three guitarists, a bass player, and an equally searing backup vocalist. “Do you like what you’re hearing so far?,” she asked partway through her set, a mix of originals and covers. You can be sure the audience did! What an amazing set!

The festival seemed to be catered toward people who have a passion for music over people who just wanted a festival scene. TURF kept true to its low-key, earthy vibes – evident in the fact that it was very family friendly. TURF fan Bram summed it up quite well: “TURF is easily my favourite weekend of the summer. Over the last four years, Collective Concerts has built an environment at Fort York that feels like you’re walking through the ‘greatest hits’ of Toronto venues The Horseshoe and Lee’s Palace. Seeing a folk band with the skyline before you and trucks passing along the Gardiner is somehow the perfect visual for the Toronto experience.” 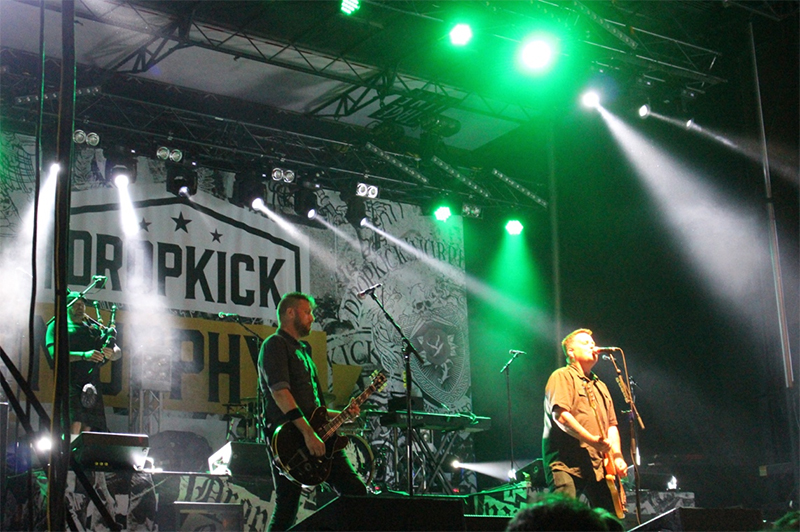 There was an air of nostalgia as we saw a rare generational divide – young parents are reliving their early middle school days, as they hoisted up their youngsters on their shoulders. At the West Stage, everyone swayed to Dropkick Murphys’ “Rose Tattoo,” after the crowd was teased into thinking they were done their last set and the lights dimmed. The big finale concluded with a booming “I’m Shipping Up to Boston.” Energy was high and the band was very grateful to the angst-reminiscent fans.

As self-proclaimed superfan, Elan, stated, “James Bay has embraced the outdoor festival vibes and engaged with us as participants in the musical experience.” “Let It Go,” the all-time James Bay classic, moved the crowd to an ultimate sing-along at the East Stage. James Bay then transitioned over to an acoustic instrumental version of Presley’s “Can’t Help Falling In Love,” as fans swooned and sang along to his soft guitar. As the set moved along, James Bay brought out some more up-tempo tunes – he rocked out some solos during “When We Were On Fire,” as reds and yellows enveloped the strobe-light-covered stage. The interactive call and response with the audience brought an energy level that kept fans begging for more. 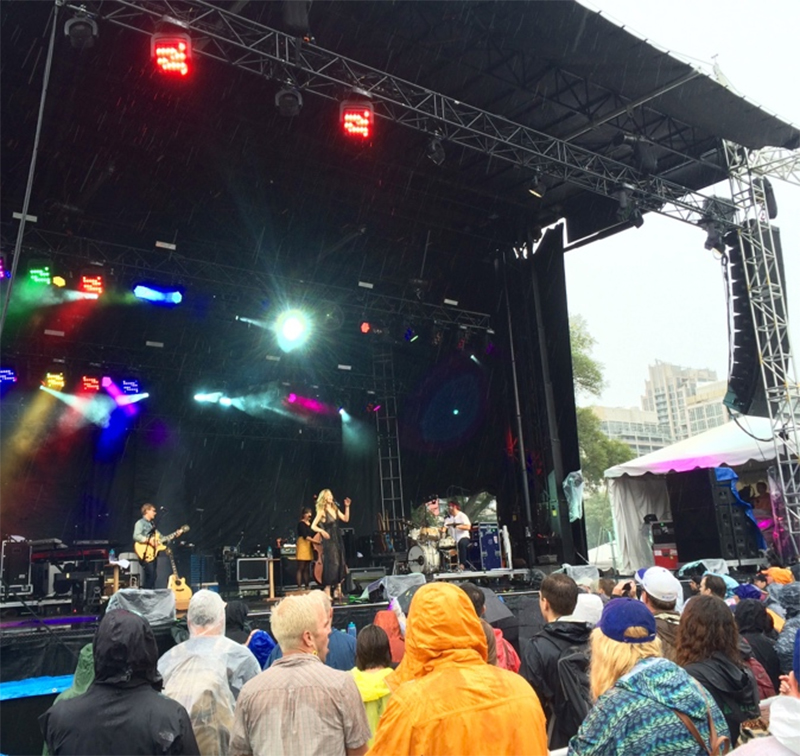 As Rachel Price took the stage, she gave the audience a bit of a lowdown on the harvest moon, saying it’s not a time to make big choices. The choice, however, of standing in the pouring rain for a Lakestreet Dive concert is the best choice anyone could have made. The band covered lots of new tunes from their album Side Pony. After each song, the band members – Mike Calabrese, Rachel Price, Bridget Kearney, and Mike Olson, proudly reported on who wrote the song. Near the end of the set, they brought on a country vibe with one of the band’s favourite songs to cover, “Lola,” – inspiring some feet-tappin’ in the audience.

Lush started off its set by claiming ownership over the rainy weather, having brought it all the way from its home country – England. This band has not missed a beat; it is still rocking out like it’s the 1990s. Lush’s nonchalant demeanor heavily showcased its veteran status in the Grunge-Rock scene. True fans enjoyed the throwbacks, while the newbies got a taste of what it would have felt like to be born a few generations back. 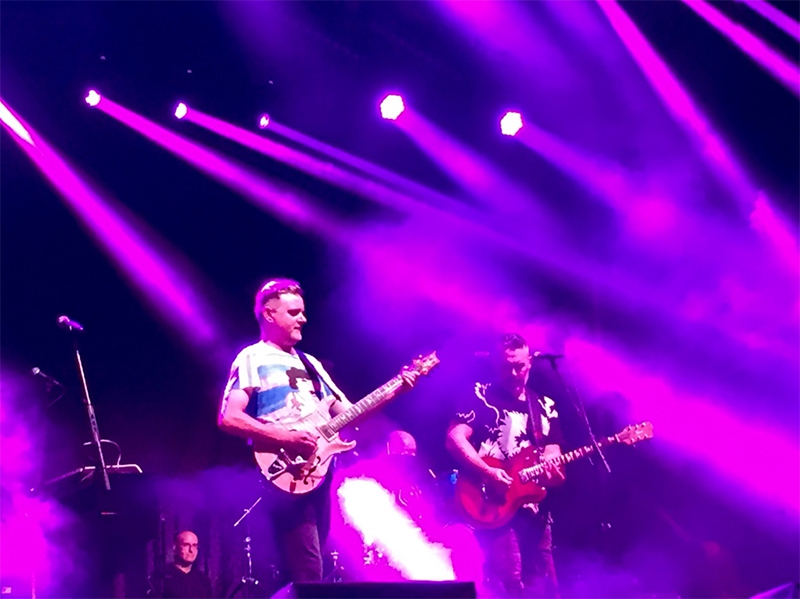 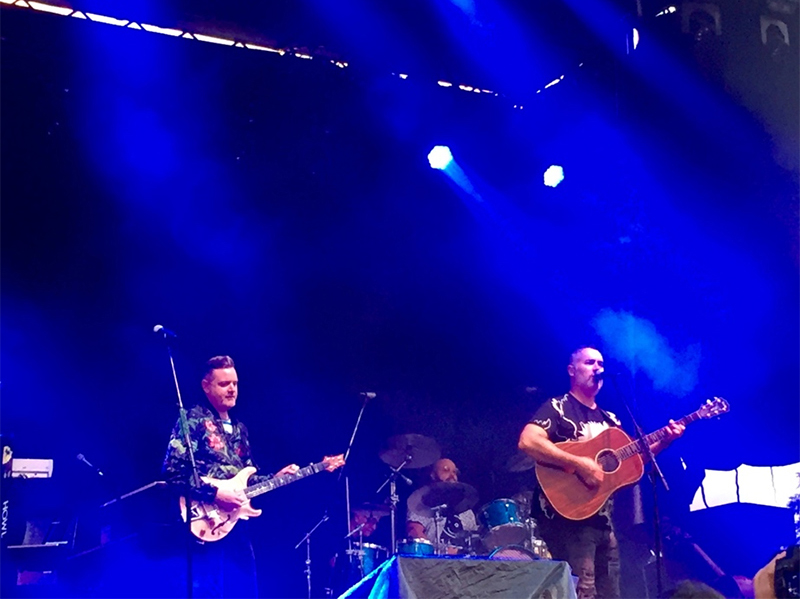 Stated by Barenaked Ladies fan, Emily: “Comedy was king on the Barenaked Ladies stage tonight. Hometown pride rang true as the band laughingly recalled its first-ever concert at this very same venue – playing for the troops at Fort York back in 1812. The lightness kept consistent throughout the night where the band engaged the audience from ‘repeat after me’s to playful cover medleys. Arguably the biggest TURF crowd yet huddled around watching these Ontario boys deliver song after song with big smiles and unparalleled energy!” 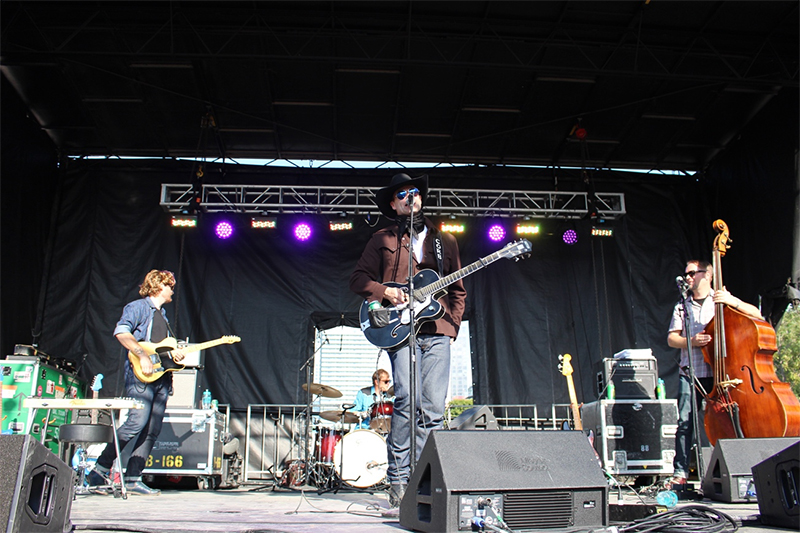 Corb Lund brought on the country twang of TURF. He was decked out in cowboy gear, boots included. Corb told the audience that “it’s part of the getup,” even on this feels-like-30-degrees-weather day. The Corb Lund band has been playing around Canada, from Winnipeg to Sudbury and beyond. The audience was charmed with humble tales from their beginnings, including the usage of his sister as the lead love interest in an early-on low-budget music video. Canadian landscapes set the scene to much of their music – Alberta, the Rockies, and the Wild West all made appearances with a particular nod to Corb’s brother who worked in Alberta’s oil patch. Crowds near-swooned as the band played a roaring rendition of the “Good Old Hockey Game” in a G-rated “strip tease” where Corb Lund’s outfit melted away with the heat – neck wrap, jacket, and cowboy hat. 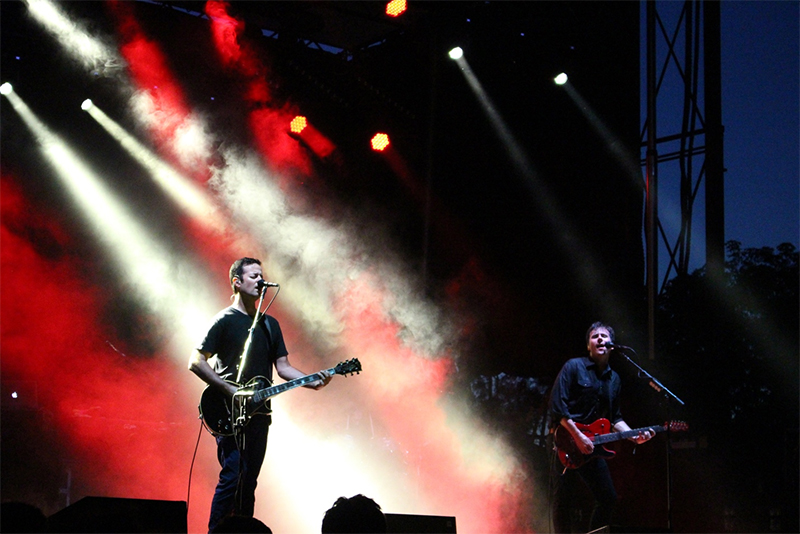 As parts of Fort York are under construction, Jimmy Eat World thanked the Bermingham construction company for the most expensive stage prop they’ve ever had. The crane had absolutely nothing to do with their music, although the band stated that it did make them consider covering Miley’s “Wrecking Ball.” The West Stage was packed until the very end as devoted fans patiently waited out a finale, which they correctly assumed would include “The Middle.” 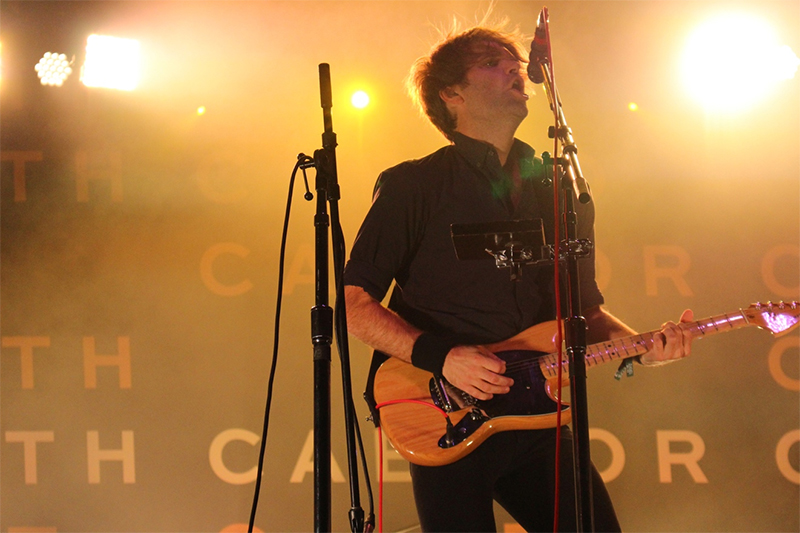 Death Cab opened with the ever-fitting “I Will Possess Your Heart” as the audience completely fell under its broodingly romantic trance. The band did not disappoint, as it played plenty of tracks from its album Plans – including “Crooked Teeth,” which came up as lucky number three. Its songs stayed true to the versions that the crowds had long-since held dearly to their hearts. The band hasn’t changed – its sound was as crisp as ever and its stage presence was electric. With this show completing a year-and-a-half-long tour, the band dedicated their song “I Will Follow You Into The Dark” to their hardworking team.

After day 3 was sadly over, TURF proved to be a wildly successful weekend. As energetic festival go-er Erin stated, “The line up was super eclectic. Having the opportunity to hear such different acts after another is what a music festival is all about. The “poppy” afternoon made the rain non-existent. Ween’s obscure rock talent paired with the harvest moon just made perfect sense. Great times all around and will definitely be back next year!”

The Spill Magazine is a Toronto-based online publication dedicated to covering the independent music scene with a strong focus on our thriving hometown talent. Our writers bring you up-to-date news, in-depth features on musicians and reviews for the latest CD releases. We also travel to the front lines for all local festivals including Canadian Music Week and North by Northeast. Don’t forget to check out our Facebook and Twitter pages for all daily Spill updates.
RELATED ARTICLES
barenaked ladiescorb lunddeath cab for cutie