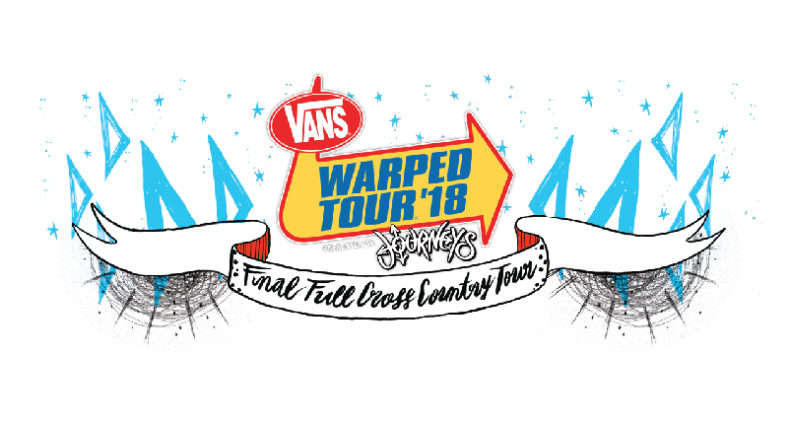 The weather could not have been better for this, the final time that the Vans Warped Tour would travel to Canada, with the sun sliding out from behind thick clouds to warm the thousands of fans congregating at Echo Beach. The sun, mixed with the breeze coming off Lake Ontario and the instantly palpable feel of community created by the event organizers, made for an almost idyllic environment for a day-long festival. Food trucks, band tents, six stages, swag bags, and copious merchandise was on offer to a community that seemed to embrace every possibility of human expression – mohawks, black jeans, and tattoos mingled with the shirtless and the barely-covered in a truly inspiring example of a music scene not just welcoming but promoting acceptance.

The unfortunate reality about this event, regardless of the careful attention to detail put into its planning and the active creation of an inclusive community, was that the music failed to live up to that same impressive standard. There was a feeling with each new performer on the main stages of something nearing desperation, of awareness that this was the end of something that was once significant but had now become less so. It would be inaccurate to say that this event was an exercise in futility as there was an audience here that was more than willing to run from one stage to the next to see their favourite acts, but beneath it all was the very obvious funereal shuffle of an event breathing its last. Seemingly every band that came on stage followed the same script – swear often in an attempt to get more life and enthusiasm from the crowd (which in itself is relatively damning), ask the crowd how many people have ever seen the band play live before (most often the answer was few), swear some more, then remind the crowd that this was the last ever Warped Tour so they had better be appreciative of what they were seeing and hearing. Notice not once in there was the focus on the music.

There is a predictability to pop-punk and emo music in that there is little variation in vocals or instrumentation, so it was refreshing to be presented with bands that broke from the script, both in their interactions with the crowd and blessedly, with their music. In particular, The Maine and The Interrupters were both impressive, the latter playing in front of a sparse but fiercely appreciative crowd; ska is apparently more of a niche market than ever. While The Maine came onstage in matching outfits, injecting all their interactions with humour and playing a solid set, The Interrupters not only injected some much needed musical levity amidst the seriousness of the other performers, but also played with a clear appreciation of their fans and with an attempt at having fun, plain and simple. There were other memorable moments for sure, not least the performance of Canadian pop-punk legends Sum 41 and Simple Plan, but for true memorability, The Maine and The Interrupters left the clearest mark. A shout out goes to Bedouin Soundclash also, who were very aware that they were a band whose sound didn’t exactly fit this scene, but soldiered on anyway and put in a solid set. The day may have belonged to the script-following, frequently-swearing, predictable pop-punkers but the Warped Tour has always been about inclusion and that extends to the bands, even if those who broke the mould played to thinner crowds.

As an event, the 2018 and final version of the Vans Warped Tour was a memorable one, though unfortunately less so for the music than for the community that created, reinforced, and attended it. The sun is setting on many of these genres but punk in its purest form, though absent from the Toronto event musically, will always endure and if nothing else, will always be the genre in which anyone and everyone can not only find a home, but an accepting and inclusive one. That is an impressive legacy that the Warped Tour has added to and can feel pride in when reflecting on its contribution to the music scene of the last two decades.

It was very significant to see so many community organizations at this event, especially those actively combating drug use and abuse (most notably FEND), promoting awareness of mental health and depression (To Write Love on Her Arms), and combating sexual assault (A Voice for the Innocent). Please check out the Warped Tour website under the ‘Non-Profit’ link for a complete list of organizations actively involved in the event and in our communities.

Br. lives in southern Ontario, grew up on The Beatles and The Journeymen, spent his adolescence immersed in grunge, and his adulthood in British alternative. His greatest joy is seeing his son dance and grow into his own appreciation of the indescribable joy of music...
RELATED ARTICLES
bedouin soundclashecho beachfestival
7.0

by Norman Darwen on October 4, 2019
Bedouin Soundclash Mass Easy Star/Mr. Bongo/Sony Canada Jay Malinowski and Eon Sinclair are back with the first Bedouin Soundclash album since 2010’s Light The Horizon. I’m not going to say [...]