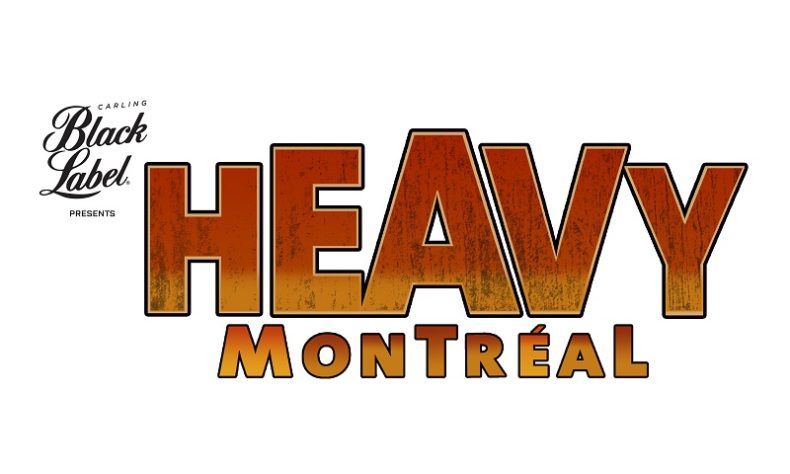 Being the first set of the day at a festival is always a daunting challenge, particularly when you’re a small instrumental prog metal band like Toronto based Intervals. With the crowd still thin and the sun reaching towards the centre of the sky, Aaron Marshall and company kicked off day two of Heavy Montréal with everything to prove.

The reaction to the first couple of songs, taken off Intervals’ 2017 album The Way Forward, was lukewarm at best. While some of the more enthusiastic fans were grooving along at the front, the band were lucky to get more than a begrudging nod or two from the rest of the slowly growing crowd. However, once they started cranking out a few songs from their successful second album The Shape of Colour, which is notably heavier than their newer material, fans and newcomers alike started getting a bit more into it.

Interspersed with earlier tracks off their In Time EP that more closely resembled full on djent than the more atmospheric, jazzy influences that newer fans would be familiar with, the back half of the set certainly packed a punch. With their backs against the wall, Intervals managed to put together a strong set that got the crowd moving and set a good tone for the rest of the day.

Following Intervals on the Apocalypse Stage were New York metalcore outfit Emmure. While Intervals managed to put together a tight set with very clear sound, Emmure’s sound engineer was less successful (to put it gently). Falling into an all too common trap for heavy metal bands, the bass seemed to suck in any distinguishable melodies from guitarist Joshua Travis and bassist Phil Lockett into a chaotic mess of sound. Beyond the drums and Frankie Palmeri’s rough vocals, only the overused backing tracks were at all audible.

Fortunately for the moshers in the crowd, drums are all you really need from a hardcore like Emmure to get a good circle pit going. Spurred on by Palmeri’s occasional shouts of encouragement, the front of the crowd was letting loose in true metal festival fashion by the second or third track. Unfortunately for everyone else, the sludge of distortion that reached us was hardly enough to provide a satisfying musical experience. At least lots of people had fun.

After Emmure’s lacklustre performance, I turned to Bad Omens to restore my faith in being able to enjoy Metalcore (at least in a live setting). The band took some much needed extra minutes to make sure their sound check went well before starting their set in front of a full crowd at the smaller Garden Stage (which was very pleasantly located in the midst of tall, overhanging trees). That attention to detail paid off, as the Los Angeles natives jumped straight into songs like “Reprise (The Sound of the End)” and “Hedonist” which led us through the band’s more expressive side and heavier breakdowns with ease.

Unlike Emmure, whose fan base was notably absent from the crowd, Bad Omens enjoyed strong support during their performance. Pits were forming organically in front of the stage and lead singer Noah Sebastian convinced the enthusiastic audience that a couple of walls of death were in order. They were even able to coax the crowd into singing the vocal parts without help on a handful of more popular songs like ‘Glass Houses’. All in all a great gig, even for those less inclined to the genre like myself.

Among a slew of modern names specializing in thrash, nu-metal and metalcore, stoner rock and doom metal heavyweights Sleep were truly in a class of their own this past Sunday. After reuniting in 2009 following a decade of inactivity, the San Jose power trio entered the summer of 2018 on the back of the release of their  critically acclaimed recent comeback album The Sciences.

The excitement of the crowd was palpable, with most of the crowd puffing on a joint with great anticipation by 15 minutes before the band was due to play. Unlike most of the other acts that day, Sleep came on with their mouths shut and let their music do the talking, with thundering riffs and atmospheric shredding carrying the conversation at large. Al Cisneros’ gloomy and doomy vocals were defiantly met with joyous approval from the much-more-than-half-baked crowd, who were fully embracing the dark heavy atmosphere of the occasion.

New tracks “Marijuanaut’s Theme” and “The Botanist” stood up alongside seminal classics of the genre “Holy Mountain” and (some of) “Dopesmoker” with ease as Sleep blasted their way through a very long four song set. When the stoner rockers reached the end of their set, the crowd was so entranced by either the fine atmospheric work of guitarist Matt Pike or so blasted out of their minds (and probably both) that, by the time they realised the set was over, the band had already been off the stage for a minute. What better way to celebrate the impending demise of Canadian prohibition?

After a well-earned break in the comfortable and shady media area, I headed back out to the Apocalypse Stage to catch the perennially successful Trivium. Unlike the bands playing earlier in the day, Trivium’s stature and popularity were already well established. Despite offering a helping hand, Matt Heafy’s encouragement was hardly necessary as enthusiastic moshers and backup singers in the crowd made themselves known early on in the set.

Even though the Floridians played a set largely featuring songs off their new album The Sin and the Sentence, the crowd’s energy was unfaltering throughout. Songs like “Betrayer” and “The Heart From Your Heart” were as well received as older cuts like “Until the World Goes Cold”. Trivium couldn’t have asked for a better reception, with Heafy making it known throughout that the Montréal audience were well on their way to being the best crowd so far on their World Tour.

Though the band did well to please their own fan base, their set seemed overrehearsed and missing natural energy at times. Perhaps a consequence of this being the last stop on their tour, it did little to harm the overall experience but it wasn’t the kind of performance that convinces a host of new fans to idolize you. If anything, the crowd was the highlight of this concert and the band knew it.

Back before they were Grammy nominated and went on headline tours with fancy visuals following the release of 2016 album Magma, Gojira were already renowned among the world’s metal community for their incredibly tight, energetic and unfathomably heavy performances. Not only that, but their progressive and technical tendencies had long set them out as leading the way for Death Metal in the 21st century. Now that they finally have the reputation, the French band is determined to keep moving above and beyond their growing list of successes.

This was obvious for all to see at Parc Jean Drapeau tonight. Gone was the band that would skip the melodic introduction of “Flying Whales” and jump straight into the song’s brutal breakdown to make sure that the undulating ocean that typically makes up their crowd would continue uninterrupted. Gone was the band that would tear through a planet smashing set without even a few seconds to say hello between songs. Instead of this minimalist death metal band so focused on the pure groove of their music, the French band presents themselves today as an act increasingly assured of their status at the front of modern progressive music.

Introspective, mind-bending visuals behind the band blended seamlessly into their more modern cuts like “The Shooting Star” and “L’Enfant Sauvage” while they faded away entirely for old staples like “Love” and “Backbone”. Huge pyrotechnics and steam machines going off throughout the performance did nothing but fuel the fire of this band’s huge stage presence. Those who remember the Gojira of old can attest that, while a welcome addition to their show, the band hardly needs such extra touches to make themselves heard.

The band’s confidence matched their ambition, adding jams and extended sections throughout the set to uproarious ovations, and pausing halfway through “Flying Whales” to make sure the crowd was ready for the breakdown as they sat on the edge of their figurative seats (you couldn’t sit down within 100 meters of the stage even if you tried). With more personality, showmanship and live experimentation than before, you never got the impression that the Frenchmen were trying too hard. With a new album in the works, Gojira have painted themselves as a band that can only go above and beyond where they’ve already been.

After Gojira’s set, I managed to crawl my way to the back of the main stage to sit down and enjoy a cup of tea. Unfortunately, my repose was interrupted by noisy headliners Limp Bizkit (as well as the fact that I couldn’t find any tea). Replacing Avenged Sevenfold at the last minute, the infamous nu-metal act came in with low expectations and a typically stubborn desire to defy those expectations (as well as pretty much everything else).

Fred Durst’s witty commentary was in full flow Sunday night, shifting through self-deprecation, general mockery and off-colour humour in impressive fashion as the band went through a set featuring old hits and covers (which comprised half of the set). While the “Unholy Confessions” tribute to Avenged Sevenfold was appropriate, playing two Pantera songs after a cover of “Smoke on the Water” does not do much to change the mind of those who are less than impressed by the act’s musicality.

It would be silly to think that the enjoyment of a Limp Bizkit show comes from the band’s unparalleled musical genius. Shenanigans like Durst and guitarist Wes Borland playing half of “Break Stuff” in the middle of a mosh pit whipped up the crowd in typical fashion. It was clear that Durst’s personality was as vital to the show as his vocal delivery, which it must be said was fairly strong for a petulant 47-year-old struggling to give a shit. Though, while better musicians certainly played that day, Limp Bizkit admittedly threw together a pretty good party to end the weekend with.

With a fairly diverse variety of bands on show across four stages alongside various hang out areas, activities like ‘Heavy Mania’ (a metal-themed wrestling stage), and a plethora of merch/souvenir stands (as well as a not indecent amount of food and drink options), the Heavy Montréal organizers managed to put together a festival that would be enjoyed by metalheads of all backgrounds. Little kids were welcomed into the thick of any crowd and space was made for those fans with disabilities, which spoke to the overall safety and inclusiveness of the event. All in all, Sunday was a fantastic day for Montréal’s metal community.

Based in Montreal but raised across Western Europe, Andrew feels at home both everywhere and nowhere. Having picked up the piano at age four, he has since gone on to add clarinet, saxophone and guitar to his musical arsenal. As well as crafting music, Andrew spends a lot of time listening both at home and in live contexts. Rather than focusing on a particular style or calibre of artist, he is keen to explore music of any shape or size. Outside music, Andrew's passions lie in philosophical writing, visual art and sharing positivity with the world around him.
RELATED ARTICLES
festivalheavy metalheavy montréal