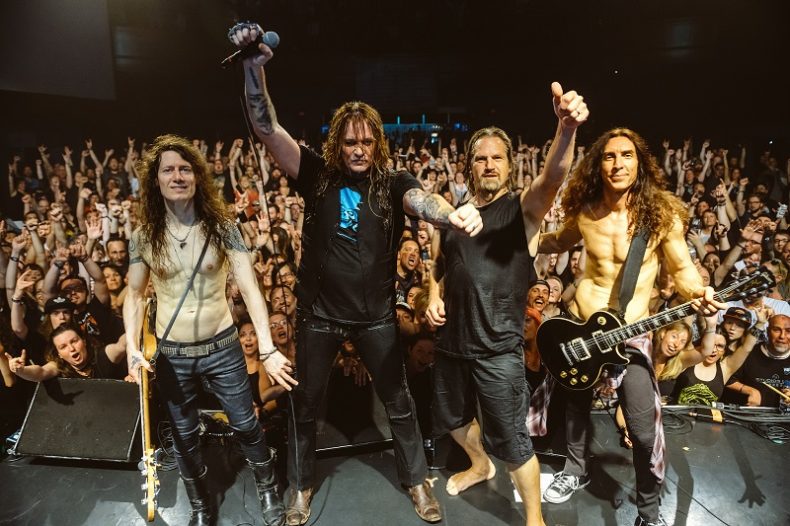 Oshawa’s The Standstills were an unknown entity to the unsuspecting Québec crowd tonight as they opened for Sebastian Bach. It didn’t take long however for the duo to leave their mark and make a lasting impression on those who had come to rock. “I wanna get fucking crazy tonight!” declared guitarist Jonny Fox at one point, and that they did, taking the entire audience along with them.

With a simple plan molded on The White Stripes, the powerhouse duo consists of Jonny Fox on guitar, and Renée Couture on drums. This pair is perhaps a little more closely matched, however, as Couture is clearly a powerhouse on drums with a more sophisticated style. The place was packed, the band was loud, and they were they to make an impression – which they certainly did. The crowd was wowed by such standout numbers as “Wild” and “Ride”.

“Anyone want some Led Zeppelin?” asked Fox of the audience. “This one’s for you!” he declared as the band broke into a romping version of “The Immigrant Song”. The pair broke into a few more songs before finally ending the night with a blistering version of their earlier single, “Rise of the Fall”, bringing Fox down on his knees, much to the delight of the audience, who were by then well-oiled and ready for Sebastian Bach.

Sebastian Bach took me by surprise tonight at his performance at the Festival d’Été de Québec. I had already seen him a few times over the past ten years opening for Guns N’ Roses, but during those unmemorable shows I did not stay in my seat for the opening act. Tonight as the headliner at the Imperial Bell Stage, Sebastian Bach has my undivided attention. This is Québec City, and there may well be more metal fans here per capita than anywhere else in North America. The utmost respect for Bach was ever present, with fists and devil horns pumping in the air.

The show opened with a fast-driving, thrashy version of “Slave to the Grind” by his former band Skid Row. His long setlist actually included a fair amount of cover songs, including Motley Cruë’s “Shout at the Devil” and he finished off with Rush’s “Tom Sawyer”.

Sebastian Bach is truly one of the best metal voices of the ’90s, and over the years he’s had his fair share of drama and unfair criticism. It’s festivals like this that open up the doors and give everyone a fair shot to deliver the goods. While the Toronto audience is much less patient and create unfair impressions of Bach, Québec City will let down its guard and collectively embrace what this city loves – Heavy Metal. Tonight those goods were delivered and the dedicated old city embraced it all.