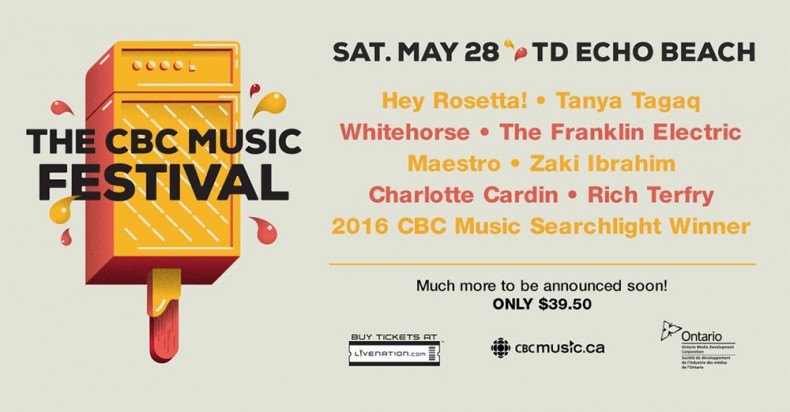 Thirty degrees, hotter still with the humidex. Every inch of shady real estate, from the VIP platform’s interstices of deck-overhang, to the audio engineer’s steely tent of respite, is occupied by a.) teenage couples fantasizing about what it would be like to drink alcohol in public, and b.) restrained children, with sunscreen smeared like war paint across forehead, arms and legs. Welcome to Echo Beach.

On account of a train delay, I missed most of Maestro Fresh-Wes’ R&B-Hop intro on the main stage, but I did arrive in time, thankfully, to watch Tanya Tagaq bewilder and frighten many concerned and irritated parents.

Tagaq’s gargantuan throat singing, which places her shoulder-to-shoulder (in terms of uniqueness, not height) with Diamanda Galás and Björk, was backed by a solo string sidekick and a pursed-lipped, multitasking drummer. The improvisational piece, which lasted roughly 30 minutes (her entire set), went from serene meditation to cacophonous eruption, spontaneously. The power of this piece drove away many of the eager early-arrivers; these are the same folks who would later flock to the milquetoast offerings of Tokyo Police Club, with lyric sheets hidden in their jean shorts. Tagaq’s set was as compelling as it was alienating. This explains why, despite her recent Polaris award win, she was relegated to a 2:40 time slot. Her set – challenging, inventive, exploratory – was a total antithesis to the rest of the acts, on all other stages.

Whitehorse was the follow-up, delivering much of what one expects from the duo: reverent blues rock and loud but never boisterous singalongs. “Devil’s Got A Gun” was the opener. It’s one of their most recognizable tracks, and featured multi-instrument looping, where Luke Doucet and Melissa McClelland took turns maintaining the core riff while the other hopped on drums or guitar and created an on-the-fly backing track, providing the cushioning for the couple’s eventual guitar solos – big crowd pleaser there. Also interesting was a Chuck Berry cover, which played to their blues strengths, and kept the set from dragging.

Meanwhile, Charlotte Cardin, the Montreal-based, Vitreux-chic singer-songwriter provided the Tent Stage with its best show of the day. Her crooning balladry matched the intimacy of the tiny, dove-eared space.

Ria Mae gave well-rehearsed performances of her Tegan and Sara-influenced hits like “Wherever We Go” and “Gold,” which drew away crowds from the main stage. Mae, her drummer, and some ghostly backing track struggled to hold focus, though, as both the absence of audience comms, and the ersatz nature of Mae’s radiopop left no room for incongruity or excitement; i.e. the things live shows should thrive on.

Finally, at around quarter to five, flocks of wannabe-hipsters arrived, with surprising fervour, to cheer on the most overrated and overplayed Toronto band of 2006-2008, Tokyo Police Club. Call it Emo-Pop, call it Indie-Rock; makes no difference to me – just don’t call it good. The 14-17-year-old attendees were particularly enthralled by the sycophantic The Strokes-lite tracks, but the lack of distinction between songs (in style, duration and melodramatic substance), compounded with the most pitiful excuse for crowd-work that I’ve ever witnessed – “It’s gonna be a good night!” / “How’s everyone doing tonight?” / “Hello Mr. Porta Potty!” – left me bitter and stationary. Their performance – a digestive aid, Tums for the ears – may finally signal a turn down Obsolescence Avenue for the vapid TPC. Luckily for attendees, the following main stage attraction, Dream Pop up-and-comers Alvvays, were much more redemptive.

The lush, droning plummet of “Party Police,” the 1984-allegory nestled within “The Agency Group,” the sense of levity incumbent in the “What’s it gotta do with you/What’s it gotta do with me” refrain from “Atop a Cake” – all of these moments resonated visibly with the audience. Alvvays’ hour-long set closed off with the vocal exercises of “Archie, Marry Me,” and as the opening line – a Love and Theft-era Dylan snapper that goes: “You’ve expressed explicitly your contempt for matrimony” – sliced through the hot air, their spell reached maximum potency.

They also played newer material, which sounded especially Shoegazey and keyboard involved. The inclusion of the perfunctory “fuck” in “Ones Who Love You” was perhaps the only Kids, Cover Your Ears moment of the day. But its deliberate inclusion, along with the identity and cohesiveness of Alvvays as a band, lend hope to the theory that nascent Indie Rock communities are finally finding purchase in Canadian soil.

After Alvvays, I managed to sprint to Stage 2 and catch three songs by The Franklin Electric, who played covers and originals of generally pleasing, unobtrusive, country-affected rock. A Stage 2 Whitehorse, if you will.

Shortly after, ‘90s Canadian Powerpop mainstays The New Pornographers brought some much-needed panache. After finishing my $8 quinoa salad and chewing through the horror that is a warm backpack apple, the simple catharses of “The Slow Descent into Alcoholism,” “Mass Romantic,” and “Dancehall Domine” acted as psychological salves. No Neko Case this time, but one hell of a backrow Todd Fancey. The harmonic criss-crosses of “Champions of Red Wine” were the highpoint of the set, with A. C. Newman and Kathryn Calder’s voices recoiling, weaving and resynching in hypnotic cycles. This was the most exuberant set of the day – turn back the clock 10 years and The New Pornos are big finale headliners, dime for a dollar.

Around 8:30 the watch-checks became more frequent as the fragrances of mosquito repellent and marijuana mingled into the cooling air. [Scene: A mother pushing a stroller stops abruptly and grabs her husband by the sleeve of his polo. She intones unmaternally, “Where the hell is that smell coming from?” Husband takes a cursory glance over his shoulder and shrugs.]

Once they began, the crowd was lured into a fleeting sense of romance, partly catalyzed by – and I say this, to quote Costanza, with an unblemished record of staunch heterosexuality – the Gosling-good looks of lead singer Tim Baker. And Hey Rosetta played fine, sure. However, if you need to bolster an argument for the absorption of Indie tropes into the mainstream, stop your searching, because Hey Rosetta typify the movement. Imagine Coldplay and Mumford and Sons climbed into a blender set at low speed. Their quaint echolocation, and delicate-to-soft dynamics are Arcade Fire after reverse osmosis. And the lead singer, bashful smirks aside (somehow disingenuous?), possesses a voice so centre plate, so 2% milk, that it glints off the ears like a finger brushing an arm.

The flickering lightbulbs, setting sun, and that special kind of Efrim Menuck-condemned bassline manipulation had the crowd “chilled out on those mellow vibes, fam” or, at the very least, wistful. But with toddlers swaddled in blankets and DEET, with Portobello Burger joints, Pickle-on-a-stick vendors and $12-beer brokers folded up and ghosted, and with a collective sigh of ennui as another day of frenzied heat fizzled out into the starless, unassuming, deep-lunged night, what could have been more fitting than champagne (even if it was really just seltzer water in fancy packaging)?

I could’ve sat defiantly on the Lakeshore West return trip and asked: what about Ought? BadBadNotGood? Godspeed? The band formerly known as “Viet Cong”? Grimes? Tobias Tesso Jr.? Colin Stetson? Sarah Neufeld? Faith Healer? Jazz? Any Jazz? At all? Just one saxophone? – But I didn’t, because turning my head to the past I learned that this year was a massive improvement. A lineup that brooks passage for a superlative 2017. There is no perfect CBC music festival; there is only a better one next year, or the next year, or the next year…

by SPILL NEWS on March 3, 2017
TORONTO’S CBC MUSIC FESTIVAL ANNOUNCES 2017 LINEUP AND ON SALE DETAILS CBC Music announces the return of the CBC music festival to echo beach in Toronto on [...]