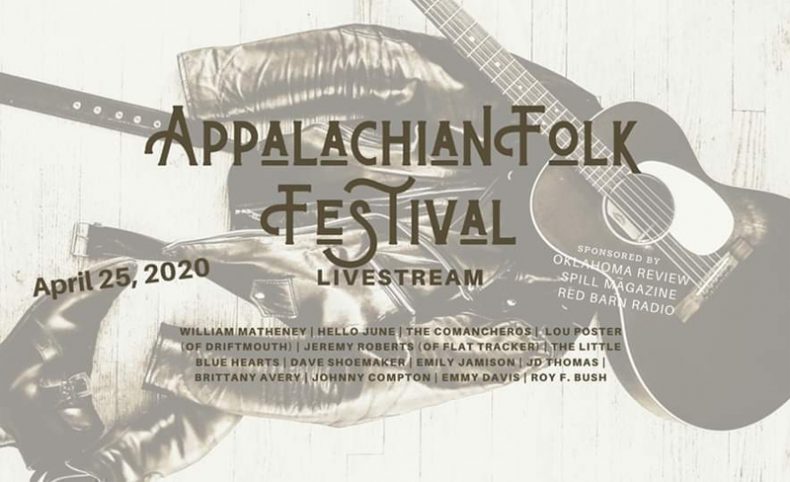 The West Virginia area has a very healthy and diverse music community, which the Appalachian Folk Online Music Festival brought to the world this past week. These artists gave it their all and deserve a great deal of credit. Walter DeBarr and Pamela Kesling, also known as The Little Blue Hearts, were behind organizing this 13-hour event, and for that they should be applauded. They have brought together a brilliant mixture of artists who, more or less, fall into the Americana genre. The artists seemed to be having a good time and managed to turn an online event into a warm, intimate show. 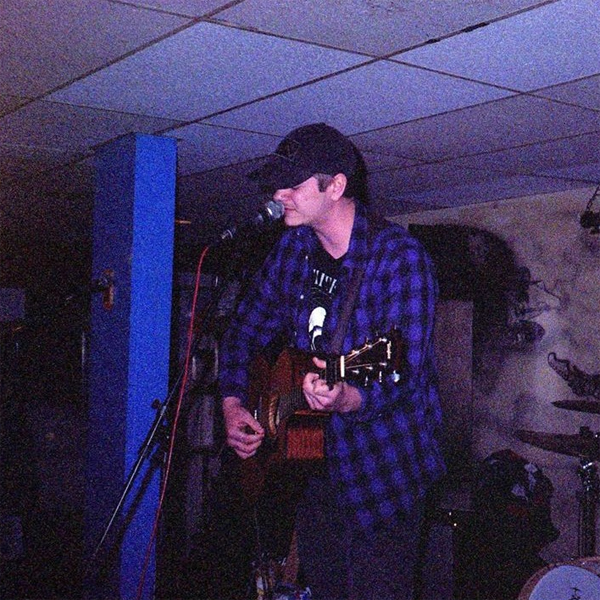 The festival kicked off with a strong set of originals from Roy F. Bush. With his introspective, thoughtful songs, Bush was an ideal opener for this full day of music. Performing songs from his upcoming album which drops in June, Bush gave a solid performance, drawing the listener in with his direct, honest style. Accompanying Bush at a distance was John Poole, expertly supporting him on backing vocals, acoustic guitar, electric guitar colouring and atmospherics, and mandolin. Standout songs included “Receding”, “Lilith”, and “Multiplied”. It was an excellent opening set. This is an artist to watch. 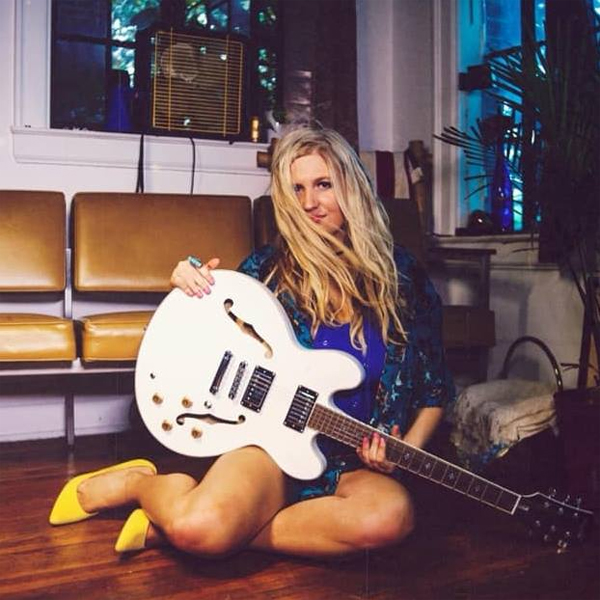 When I say that the second set belonged to Emmy Davis, I mean she absolutely owned it. An excellent folk/blues guitarist with an amazing voice, Davis brought her songs of personal strength and empowerment to the festival audience. She is an engaging performer, often sharing the back story behind her songs’ inspiration. “Send me back to the middle of nowhere, long as I’m somewhere with you” she sings in “Middle of Nowhere”. When introducing that song, Davis stated “It’s my Walmart song. If you’re with the right person, even a trip to Walmart can be fun.” Whether sad or joyful, there is a great familiarity to Emmy Davis’ songs, like a reassuring hug. The sound quality in this set was exceptional, featuring Davis’ up-front vocals and full, rich guitar tone. It was a tech setup befitting this wonderful artist. 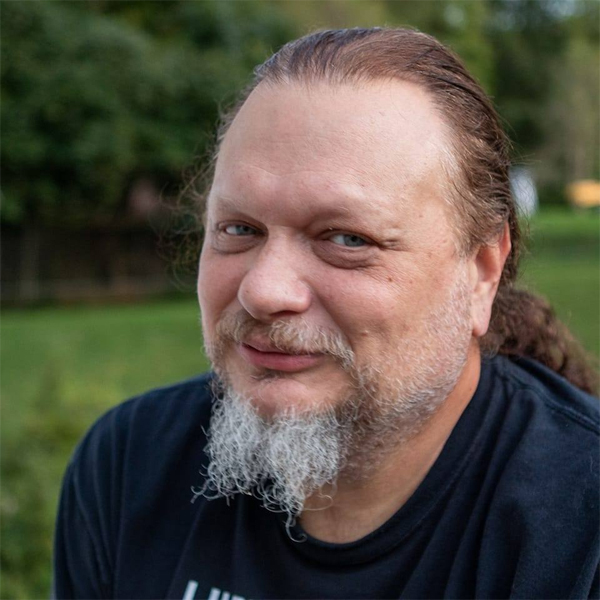 Compton brought some old time country to the show, great strong vocals and some fine guitar playing. He performed a combination of covers, including a Loretta Lynn song, and originals. Introducing a Waylon Jennings tune, he thanked his mom for introducing him to one of his favourite songs, “Amanda”. It is a bit of a family thing with Compton, who had his brother helping him with the stream. His original songs, such as  “Ain’t Goin Out That Way” and “Last Man Standing” were the clear highlights and I look forward to his upcoming album release. A fantastic set, which, to be honest, I felt I should have been in a cool, smokey bar listening. 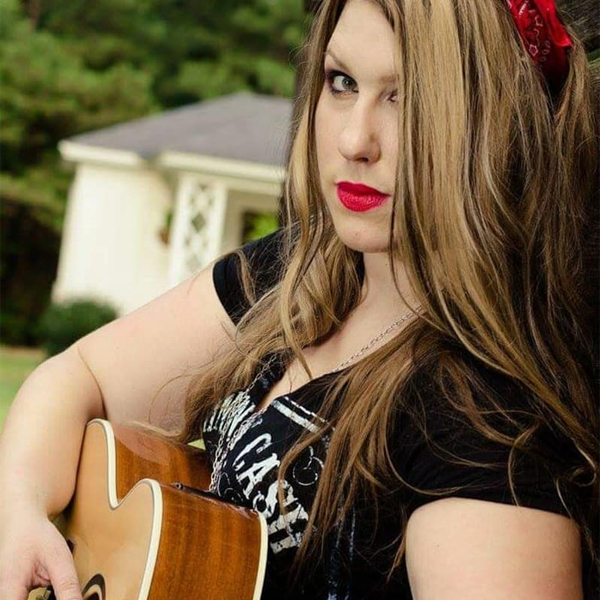 Brittany Avery and The Sassholes

“Welcome to Georgia where the state bird is a mosquito” laughs Avery during her set. Avery performed solo and played a lot of new material. She created a very intimate atmosphere, sharing stories and aspects of her life. She is a classic country artist who embodies the spirit of the greats, Dolly Parton, Loretta Lynn, Tanya Tucker, Connie Smith, and Jewel. She plays the songs with a great deal of emotion, and the material is strong. Songs such as “Loving Too Hard” show her country-rock side, while songs like “The Other Side Of The Snow” demonstrate her ability to write a solid ballad. The murder-suicide song “Six Bullets”, however, stole the show. It was a great set which created a new fan here in Toronto. 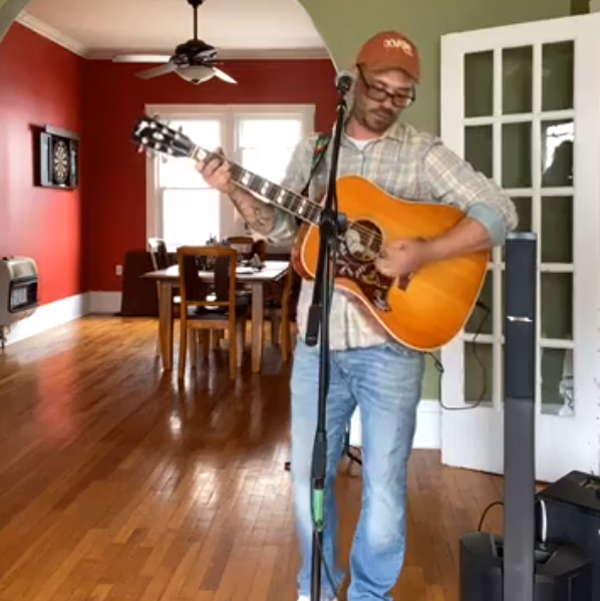 J.D. Thomas added plenty of levity and entertainment in his spirited set of covers and originals. Playing a mix of acoustic and electric guitar, as the song dictated, Thomas made covers by artists such as Jack White and Phoenix his own, with his energetic and sometimes wild style. With a set of songs filled with comic and tragic characters, Thomas introduced one tune by saying, “This is a song about a guy named Harold who likes to drink and fight,” and another, a bluegrass song “about a guy named John Morgan. He just traipsed all the way through here.” Throughout his set, Thomas demonstrated strong vocals and versatile guitar skill. A standout in this set was Thomas’ own “The Starry-Eyed Waltz”. It was a fun set from an artist who would be great to see performing in front of a live audience. 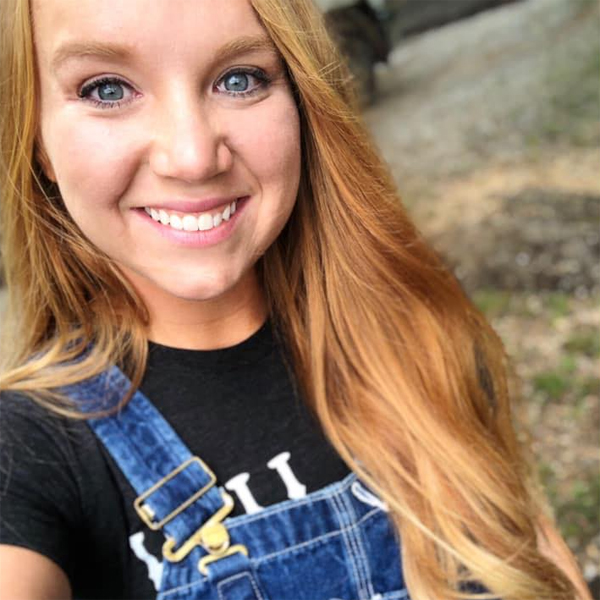 Emily Jamison performed from the same relaxed living room as J.D. Thomas, but her style was markedly different. Playing solo acoustic guitar, Jamison is a strong vocalist who writes clever, sweet songs. There’s always a story in country and folk music, but the story behind the story is where Jamison’s songs live. Whether it’s about the junkie on the corner, or her judgy-sweet neighbour, the background to each song lays the groundwork for the song itself. One particular song, “Robert”, about the burial of her great-grandfather, is a heart-wrenching work whose bluesy, old-time delivery evokes the feel of early twentieth century Kentucky. Other high points in this set include the waltz-time country weeper “Songs About Sorrys”, and the hilarious ode to her neighbour “Charlie”. After the isolation and physical distancing is past, a co-bill of Emily Jamison and J.D. Thomas would be an awesome night out. Did somebody say “road trip”?

Kentucky’s own Dave Shoemaker, makes his appearance almost halfway through this festival with his brand of blues, a very traditional acoustic blues sound that fits perfectly for the day. Throughout his set, it moves into more Americana, but initially he features some very nice bluesy tones and great melodies. He is quite personable and creates quite a sound for one guy. Along with his originals, he did a brilliant cover of Drive By Truckers’ “Love Like This”, but again, it is his original music that makes for interesting listening in songs such as “One Last Midnight” and the beautiful “For Everything and For Always”. Through his chat and his choice of beverages, he made it a very personal appearance, connecting with people through the internet. Not an easy thing to do, but he managed it. 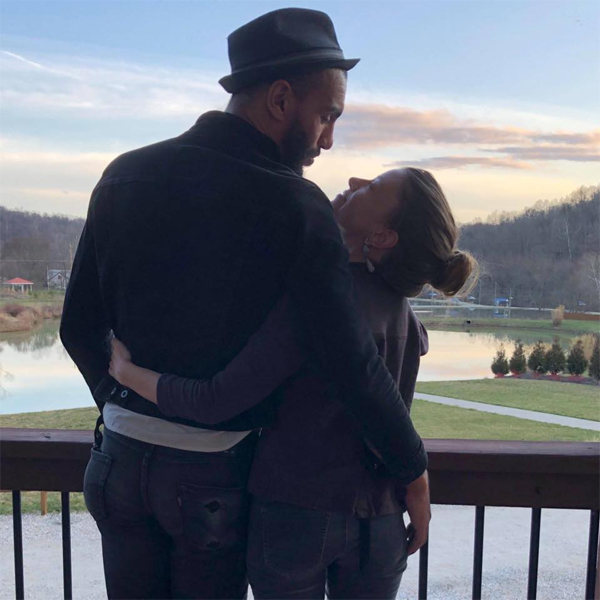 Festival hosts/organizers Walter DeBarr and Pamela Kesling are The Little Blue Hearts, who took a bit of a break from their official duties to give a lovely parlour performance of original songs. Before the music began, Kesling expressed their thanks to artists, tech support, sponsors, and co-presenters, and noted that this festival will be a monthly event, during the isolation measures.

The Little Blue Hearts are a wonderful duo, singing songs of love and faith, hardship and triumph. The contrast of DeBarr’s gravel-road baritone with Kesling’s lilting sweetness creates a beautiful balance. Many of their songs are performed in unison, resulting in one deep and shimmering voice. DeBarr’s guitar work in open-D tuning gives a dramatic and stunning backdrop to their songs. Whether is was their pensive declaration of “Outrun The Rain”, the longing reflection of “Ain’t Around”, or the anthemic “We Fall, We Break” – there were so many strong songs in this set. Thank-you, Walter and Pamela! 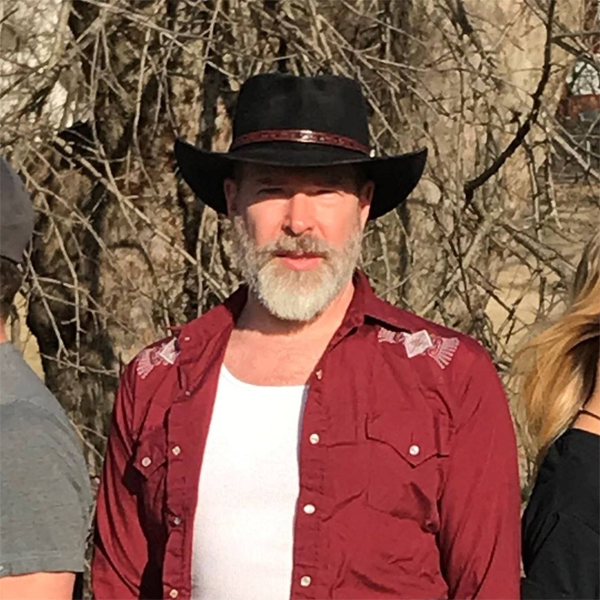 The livestream feed was a bit glitchy for this solo set by Driftmouth’s Lou Poster, but in a way it seemed to fit the mood, and Poster’s stripped-down aesthetic. The subdued light with the birch tree background, with Poster’s plaintive songs, made this performance all the more haunting. Lou Poster is a performer who is used putting his heart and soul out there in song, and this set was no exception. Poster took his virtual audience though some of the Driftmouth back catalogue, as well as newer songs, including their latest release, “Tennessee Highway”. If he was concerned about the absence of a live audience, he certainly did not show it. While he played a great festival set, hopefully Poster along with Driftmouth can get back out there on the road, to resume the tour they had to abandon in March. 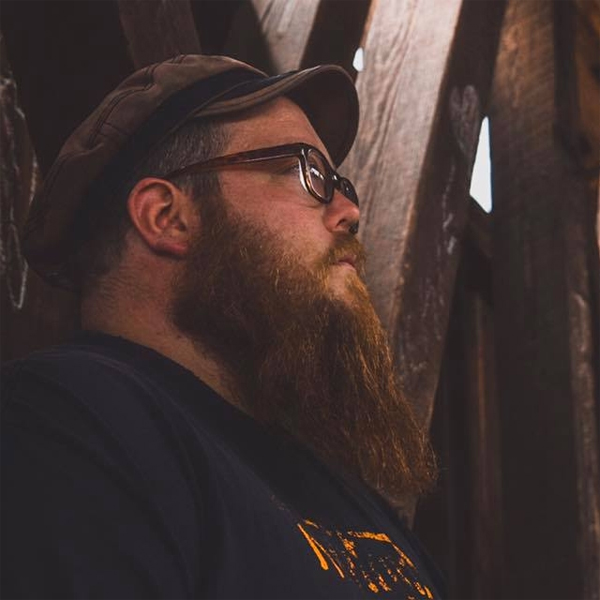 Very sadly his set was marred with technical difficulties. As such, he was unable to perform.

You might want to explore his music, however, as it is well worth your time. 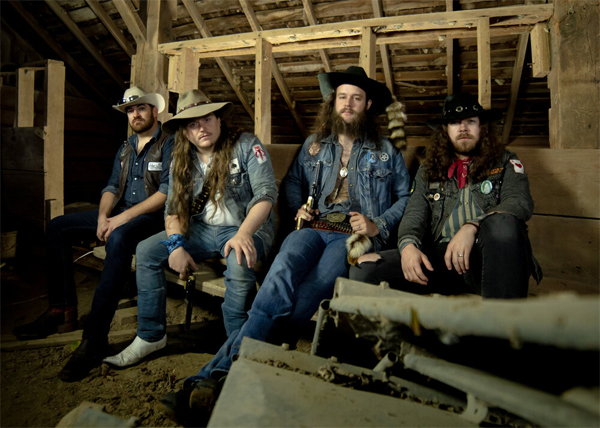 This is country music played very hard, and in this performance a beer box was used instead of drums–inventive for sure. This is good time, rocking country and their performance was nothing short of energetic fun, which included many of their songs, such as “Caffeine, Nicotine, and Weed” and “66185”. They also covered Waylon Jennings classic “Ain’t Living Long Like This”, as chosen by the fans watching, and Thin Lizzy’s “The Boys Are Back In Town”. The Comancheros are a wild live band, and would certainly be worthwhile seeing. 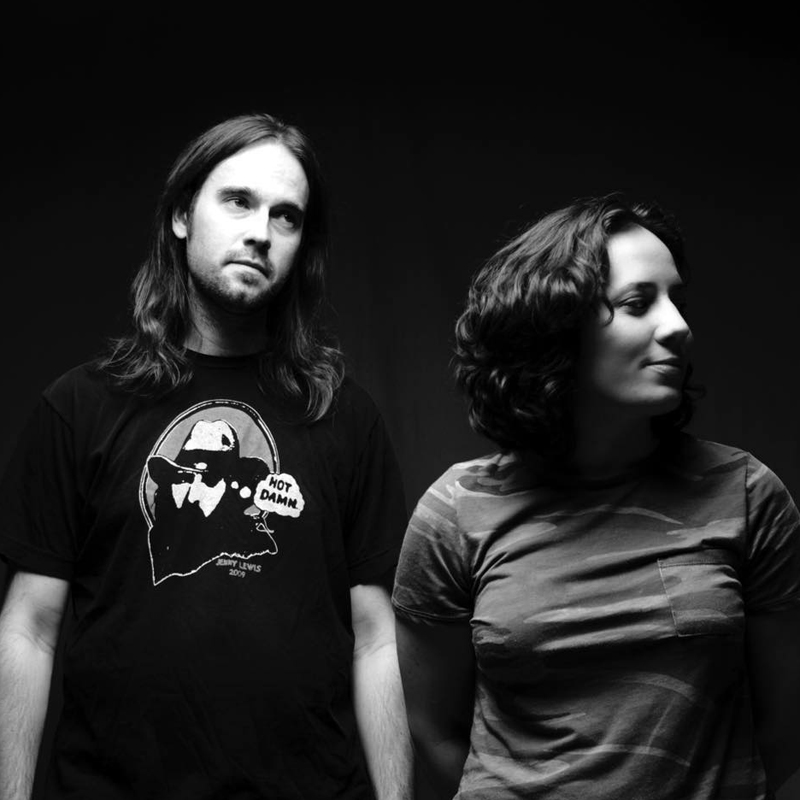 Sarah Rudy of Hello June came in with a solid solo set of new and old songs, just her and her guitar. Rudy had a great set up, and she sounded fantastic with her acoustic guitar plugged in, she was set to go. She has a very distinct voice and style of playing. “Daylight” sounded great live, as did “Soft Love”. She also demonstrated her artistic ability with watercolours. Rudy put in a solid set full of great chat aimed at the viewers and great music. Her choice of covers was spot on, with her beautiful version of “Can’t Help Falling In Love With You”. 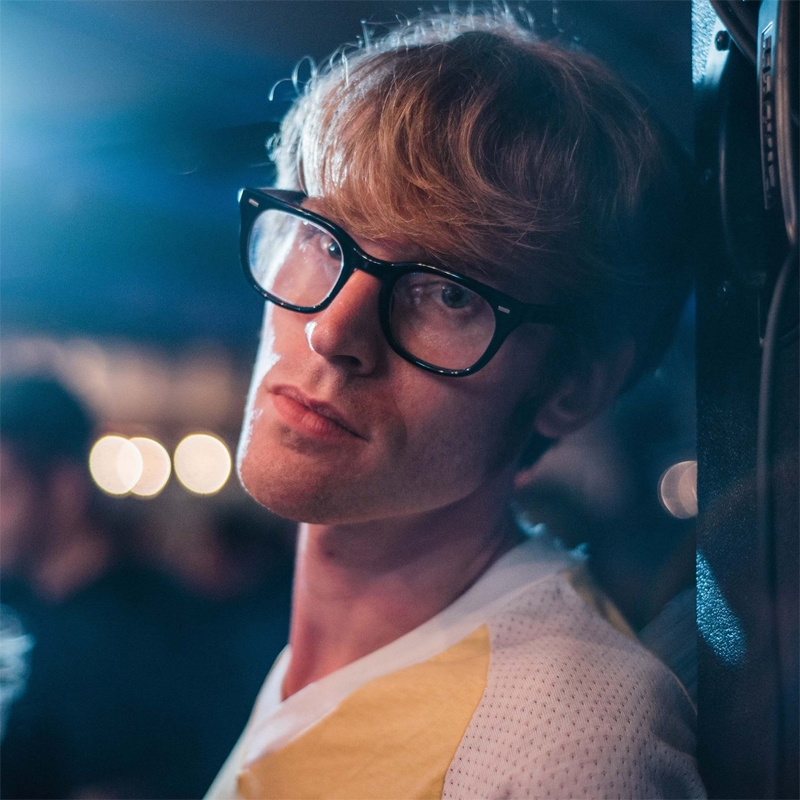 After 12 hours and many great performances after the festival began, headliner William Matheny took the “stage”. A talented and respected singer, songwriter, and multi-instrumentalist, Matheny played a closing set of original songs and covers. Technical issues early in Matheny’s set hampered things for the first few minutes. Even when the issues got sorted, the livestream audio feed had a distracting shimmer to it. This, coupled with the fact that Matheny played a program of mostly requests, gave the proceedings a more casual feel, and seemed a bit anti-climactic for a festival finale. These factors aside, Matheny performed well. Covers of songs by artists such as Jason Molina, The Paranoid Style, and Little Feat were great, but Matheny really came alive when playing his own songs. He absolutely shone on originals such as “Out For Revenge” and “Living Half To Death”. It would definitely be a thrill to see William Matheny perform in an actual live concert setting.

Congratulations once again to all at the Appalachian Folk Online Music Festival, for a wonderfully creative and diverse day of music. We look forward to future presentations!

Aaron Badgley and Bryan Williston grew up in the same small town in southern Ontario. They did not meet until they were adults, but became friends despite a bitter cross-town rivalry between their respective high schools. Their mutual love of music and radio brought them together all those years ago, and it was responsible for their re-acquaintance in recent years, writing for Spill Magazine.
RELATED ARTICLES
appalachian folk festivalfestivalhello june