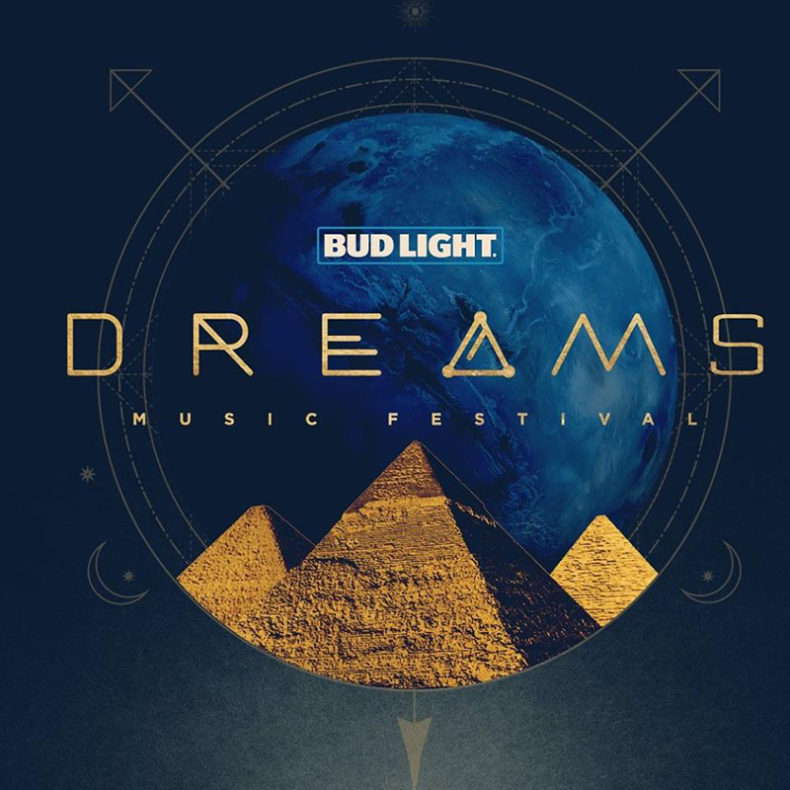 Toronto’s famous Echo Beach venue played host to the 6th annual Dreams Music Festival, originally named Digital Dreams this weekend; a festival dedicated to a diverse selection of electronic and dance music spanning through 3 different stages. Ever since the massive 2014 edition, the festival has downsized year by year but is still sticking to its roots of providing a grand experience filled with music, food and art for everyone.

As the first day approached, people began to fuss about the upcoming forecast: a risk of thunder showers. Dreams has had a history of rain and storms on its festival dates, including 2015 where the entire first day was cancelled. The audience kept their fingers crossed and hoped it would not happen again.

Trap acts Ekali and What So Not were the first to take on the main stage of the festival as the crowd slowly began to grow. Both sets were very encompassing of their musical styles; of whom I think are much underrated players in the trap game. Crowd favourite Steve Angello took to the stage early for whom would usually be a top headlining act, but the audience was still packed from front to back. In a flurry of house music and insane stage pyrotechnics, the audience kept dancing away as the rain slowly began to pour down.

Over by the two other stages (dubbed the Waterfront Stage and the Dream House) crowds began to form for the more ‘underground acts. Over by the Waterfront, techno and house DJs like Green Velvet and Loco Dice dominated by the end of the day with crowds spreading out to the far ends of the back hills. In the Dream House, bass acts like Andy C, Trollphace, Doctor P, and Crizzly kept the headbangers moving and dancing under the bright lights of the tent. But these two stages had some hefty flaws.

For one, both were too small for the audiences they were serving. During peak sets, the Dream House stage was overflowing where there was more people outside watching from a distance than inside basking in the full sound and stage design. The Waterfront had enough space for the crowd to move and dance but from a distance, the stage itself looked like a mossy cardboard box. Up close, you can appreciate the floral and tropical design but it was less flattering the further you moved away.

The sound quality also lacked at both stages. In the Dream House, there were some sweet spots where bass trembled your whole body, but in others, the bass was close to non-existent; a severe blow for the bass-heads dominating the crowd. At the Waterfront, the sound was fantastic up close but the speakers only complimented the stage. The further you moved back, the less you could hear and feel.

At a little past 7PM, music was cut festival wide. Over the speakers was an alert telling the audience to take shelter at the nearby Budweiser Amphitheatre stage or in their cars in the parking lot, as a severe storm was approaching. It seemed like the festival was cancelled and many were quick to leave in general but after only about a 30-45 minute wait, the clouds cleared and the crowd rejoiced as we were let back into the festival grounds.

On the main stage, Baauer played a shortened but energetic set that made the crowd even more blissful as the sunset poured onto the beach. The trap and hip-hop influenced set was rapid and one of the most memorable of the weekend. But as it ceased, you could feel the intensity growing as trance legends Above and Beyond took to the stage with a euphoric, nearly two hour set that kept the audience singing and dancing song by song, closing out an eventful first day.

The second day started off earlier than the first, with early acts on all three stages still gathering sizeable crowds. Anna Lunoe played a memorable set on the main stage, playing an hour earlier than scheduled but still bring the energetic house tunes to the sand. Over by the Dream House, many trance acts filled the tent up fair over capacity, spewing the audience into the drink and food area. The Waterfront saw even bigger crowds than the day before, especially during banging sets by Shiba San, Malaa, and of course DJ Hanzel (Dillon Francis’ house moniker).

At the mainstage, Toronto natives DVBBS played a strangely diverse set of tracks ranging from hip-hip, trap, dubstep, psytrance, hardstyle, house and pop. It was a headscratcher for many who know them as big-room house producers, but they got the audience moving nonetheless. Before them, mau5trap signee Feed Me brought an electro house set to the crowd that made me reminiscent of his ‘Calamari Tuesday’ days.

But the biggest set of the weekend had to go to Dillstradamus; a fusion act from massive DJs Dillon Francis and Flosstradamus. It brought the crowd to a whole new level of energy; from jumping, dancing, headbanging, cheering and singing. It was intense show of music, pyrotechnics, lights and fireworks all working together in unison.

Overall, the festival was a huge success with stellar acts and music, with a few drawbacks in terms of stage design and uncontrollable weather. Yes, the festival has downsized quite a bit and it was somewhat even surprising to see it come back, but I think this year might be a testament to show that they are still going strong. It could be even possible that they are saving money in order to come back bigger than ever down the road and become one of Canada’s largest music festivals again. But nonetheless, the Dreams team has graced the Toronto electronic music scene once again with a memorable summer weekend filled with positive vibes and great experiences.

Justin is a videographer, photographer and filmmaker from Niagara Falls, currently studying Film Studies at Ryerson University. With a passion for electronic music and the art of film, he combines the two together to bring the life of a concert and festival to your screen through visual mediums and live reviews.
RELATED ARTICLES
dvbbsfestivalgreen velvet