A CONVERSATION WITH CAITLIN STOKES OF CORLYX

Lounging is not a word that really applies to Caitlin Stokes, however replete with a glass of red she was in a relaxed frame of mind for a fascinating talk about the very talented post punk duo, Corlyx. The band is looking forward to the release of its new album, Together Apart on September 15t, which sees an evolution of the Corlyx’s sound. It has a strong commercial feel with the electro pop backdrop, whilst retaining a grungy post punk sound.

Stokes considers that this album was a conscious attempt to create a genre, an identifiable feel for the album and that this ‘was time to create a proper goth album.’ This was never shown more than in “When the Witch Comes Out,” a personal favourite from the album as it retains a haunting melody and Stokes voice adds a storytelling feel to the work that is so visual for this song. Singer-songwriter Stokes noted that “When the Witch Comes Out” is a track that may well make the live set. It is centred on visuals for ‘the witchy woman in the woods’. Although consistent with the vocals for the album, it has ‘different things done with the voice’, which are more sultry for this number. It is genuinely atmospheric and manages to create a tension with the instrumentation.

The album was written, recorded, and completed within two months, rapid for a modern-day album, and a remarkable achievement. Of course, back in the day, The Beatles would record a classic album in a matter of a couple of months, so taking years over a record is not necessarily indicative of greater quality. However, Corlyx has a product the band can be very proud of, ‘we can all be guilty of overthinking.’

The album has a heavy bass feel, entirely deliberate, and this may mean that Corlyx will have to take a bass player on the road with them, a third live member that is important for the band’s sound. Stokes recognised within post punk ‘a certain bass sound accompanied by the DMX drum loop sound’. In actuality, Stokes feels the last two albums were not post punk, they were leaning musically more toward grunge. However, in here they are much closer to the sound that they want. ‘Genres are important, and I have a clear vision now, I’m me’. ‘Lyrically I may imitate, but I must find my own voice and as an industrial vocalist I am quality’. 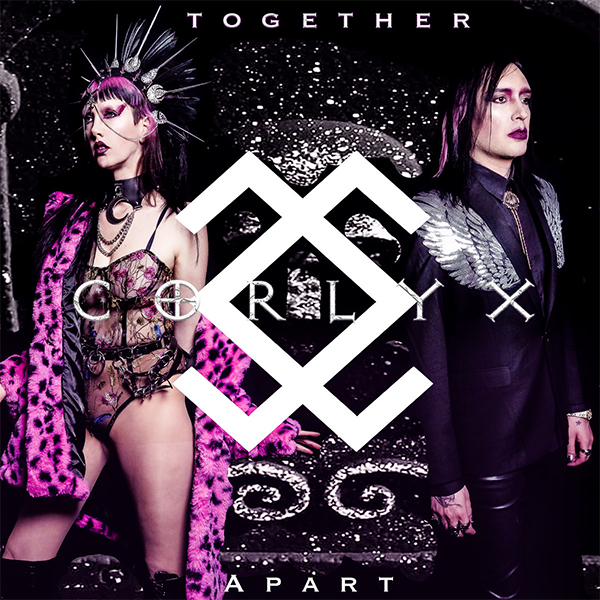 PRE-ORDER TOGETHER APART VIA BANDCAMP

There is a much more personal feel to this album with Stokes lyrically exploring issues close to her, such as her mother’s schizophrenia in “Find the Killer.” ‘I am a dark artist…and this song is about the first meeting between my parents…but every song needs emotion as music is about emotion, it has to touch you inside. Just listen to Bob Marley and you know this to be true”.

Corlyx has travelled from LA to Brighton via Berlin, and are now happily settled in the UK in the seaside town. The LA scene they enjoyed very much, Stokes being part of a wide social scene including, among others, Nick Simmons, son of Gene. LA produces many great bands, Starcrawler being a great recent example, but Stokes found it very expensive and headed toward Berlin, a centre of electropop, but the decision had to be made to either learn German fully or move. They opted to move.

With a new life in Brighton, a cosmopolitan town by the seaside, Corlyx has a new lease on life. Stokes noted Brighton as a vibrant little city with a thriving LGBTQ community and a great music scene. They have installed a recording studio in house, and fellow band member, produce and director Brandon Ashley, is producing other bands alongside his work with Corlyx. The setup works really well, and along with a rather amazing hairless cat, life seems to be definitely on the up.

There is, behind the glam and image, a scientific and technological side to this duo.  Stokes was a neurosurgical nurse for 13 years in the days before Corlyx, and she misses this on occasion. Anyone who has worked in spinal and brain surgery deserves praise, but it is a new world away from the hospital she now inhabits, a world that blends the grotesque with the harmony. Brandon Ashley, aside from being a distinctively creative guitarist is also an extremely adept producer, fully at home in the studio.

With the new album really hitting the ground running and some superb videos supporting it, self-produced and worked through using the band’s own technology, Corlyx is really worth checking out. The whole album arrives screaming out of Brighton, reminding us about the witches who live in the woods. With a desire to get back on the road again in 2021, Corlyx should continue to craft a name for itself, and with a very strong visual image it will always stand out from the crowd.