Features
1
223
previous article
SPILL TRACK OF THE DAY: ESPANOLA - "OUTSIDE SASKATOON"
next article
SPILL FEATURE: BRING BACK THE BLITZ KIDS - A CONVERSATION WITH TIM MUDDIMAN 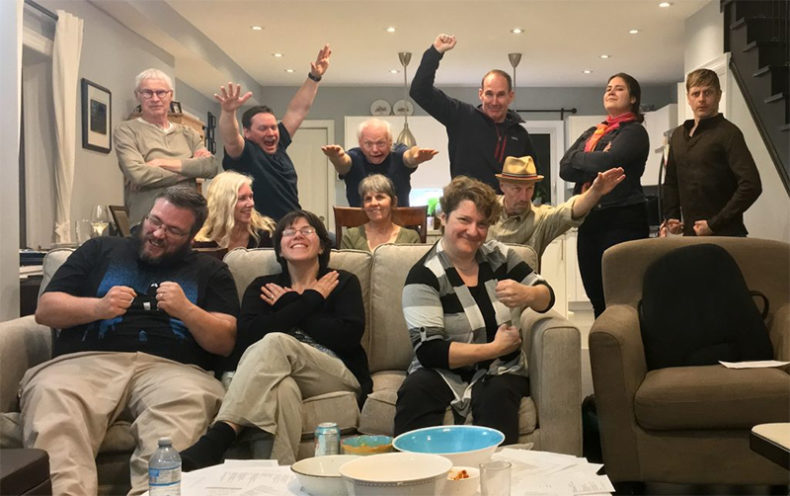 A CONVERSATION WITH MEMBERS OF THE TORONTO SONGWRITERS ASSOCIATION

Songwriters need at least  two things in order to develop their craft: some form of an audience and feedback. In Toronto, songwriters are able to meet up once a month, swap stories and songs. They also  receive constructive and helpful feedback. This group, Toronto Songwriters Association, has been meeting for 17 years on a monthly basis, and according to one of the founders, Eric Walker, “we have never missed a month in 17 years. There may be smaller groups at times but we meet every month.”

Eric Walker was one of four who formed the Toronto Songwriters Association.  According to Walker  the four original members met at Humber College. For the record the other three original members, all still active with the group, were Marc Belanger, Kim Boyce and George Skok.

“We met at a songwriter’s course  at Humber College in 1999. We had a great teacher, Orville Heyn, and when the course came to end we wondered how we could keep this going,” says Walker. “The four of us were drawn together in the course and decided to get together on a monthly basis to write songs. From the get go we started having exercises. We just built up a membership. We were surprised that the name Toronto Songwriters Association was taken but it wasn’t so, we took the name.”

Co-founder Belanger, remembers it a little differently, “I thought there was more than four. A bunch of people who took the Humber College course, who stuck together. We wanted to form an organization that did not have fees and a friendly environment.”

John Glover, a member, agrees. “I have been in other organizations and the focus is on writing a hit song in a certain genre. Not here, all genres are welcome and you do what you do. It is about encouraging writing and creativity.”

The Toronto Songwriters Association seems to have met their original goals. Members have enjoyed the experience and keep coming back for more. Anastace, for example, has been attending meetings for over six years. “It is an outlet. I mean sometimes you are in a household of strangers, and you hope for the best,” says Anastace. “There is nothing I enjoy more than writing, and through Toronto Songwriters Association, I am able to share my songs with people. I think that two thirds of the songs I have written would not exist were it not for this group.”

“We meet at a member’s home,” adds Walker. “We average 10 to 16 people a meeting,  sometimes we hit our maximum of 20. And we don’t do anything but write. We critique songs. We are not about the business end, or networking or anything like that, we are about writing.”

Chris Willson remembers hearing about the organization in an unlikely place. “I went to see Melanie Doane at Hugh’s Room, and she mentioned the organization, so I looked it up and went. It has helped me as a writer so much. It has made me more conscious of the craft of writing. It is a loving group with lots of feedback.”

According to Walker, it is the structure of the group that helps writers and keeps people coming back. “It is a comfortable setting, and for the first ten minutes people settle in. Then the host plays a song, usually the song from the exercise, then we critique the song. We do this with and without the lyrics. But we look at the lyrics as well. This takes about fifteen minutes, and then we are off to the next member.” “Because of the format,” adds Belanger, “people write more songs and better songs. You are writing a song every month and this allows members to progress as songwriters.”

The Toronto Songwriters Association does organize showcase shows, usually at The Only One Cafe in Toronto’s east end. These are usually very intimate affairs, full of great music and a demonstration as to how this group supports each other.

For more information, you can go to their website HERE.