SPILL FEATURE: THE AGE OF GRUNGE AND INDUSTRIAL MUSIC – AND IT WAS FUCKING DOPE – A CONVERSATION WITH RICHARD PATRICK OF FILTER 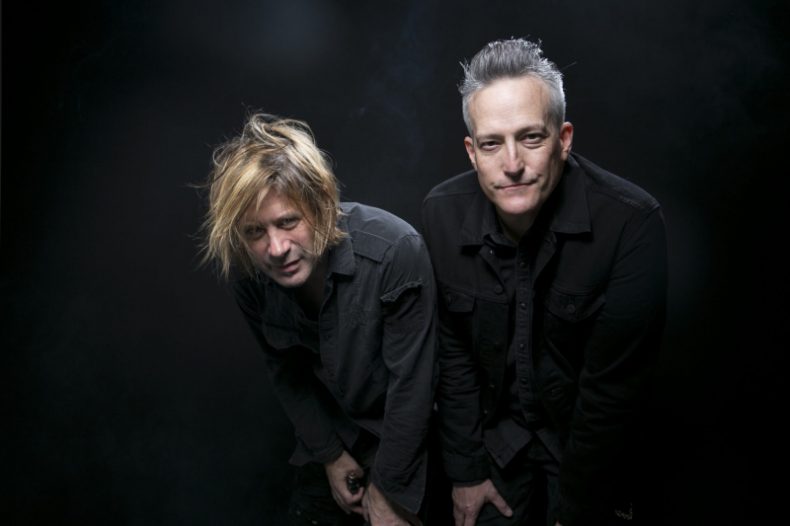 A CONVERSATION WITH RICHARD PATRICK OF FILTER

Twenty years ago, Richard Patrick was an “out of his mind” alcoholic in the midst of a secret, “mad, head over heels, first kinda love” affair with D’arcy Wretzky – then bassist of The Smashing Pumpkins. His band, Filter, had just released their seminal sophomore record, Title Of Record, and much to nearly everyone’s surprise, this album was to become among the greatest of the decade – spawning hits such as “Welcome To The Fold” and “Take A Picture” – becoming not only a fan favourite, but also critically acclaimed and would eventually go platinum. Fast forward to 2019, Patrick has just released a twentieth anniversary reissue of the album, which includes a number of bonus tracks (remixes, a live track, and singles released on various soundtracks), and is also being pressed on vinyl for the very first time.

Speaking with Patrick on the album and Filter’s legacy and the ‘90s, he tells me “it was huge; it was the age of grunge and industrial music, and it was fucking dope. Everyone loved to buy CD’s. Everyone wanted to own the record and touch them and go to the concerts, the economy was good, there was no 9/11”, suddenly exclaiming, possibly satirically, “and we were mad at the Clintons because they were just trying to give people free healthcare and shit… Different times, man, times were completely different, and they were good”. Looking back at the time leading up to the creation of Filter and Patrick’s departure from Nine Inch Nails, Patrick remembers his personal state at the time, “I was fucking angry, was fucking listening to Skinny Puppy and Ministry and I thought Trent [Reznor] was light compared to that stuff – and the reason was because there was just too much pop” Patrick continues by singing the hook to Nine Inch Nails’ “Ringfinger” in a slightly exaggerated pop tone before growling Ministry’s “The Land Of Rape”, adding “that’s what I wanted. I manned Trent the fuck up and then I quit… When the Broken EP was eventually released it was like ‘now we’re talking’ and I was listed as an influencer, relocated as ‘the live band’”. 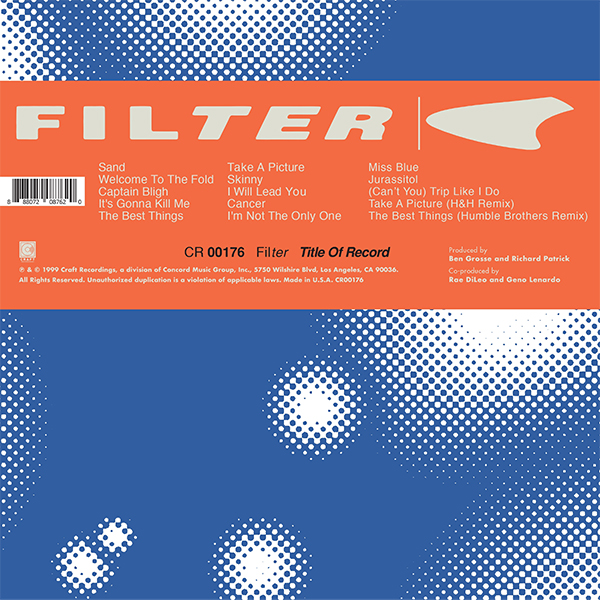 Redirecting his attention to Title Of Record, Patrick explains “It was one of the finer, high water marks of my career. ‘Take A Picture’ was a huge hit; it never officially made the top ten, but it was big for me, a little kid from Cleveland”. Regarding the making of the album, Patrick explains, “We just dug the shit out of it, man. It was an extremely experimental recording process – this was before I was a total alcoholic. The whole record was experimental.” He continues, “The first record, we only knew a drum machine, but for this one, we put a drummer in the mix – but just on a few songs… I was in a completely secret – I can’t believe we managed to keep it a secret – relationship with D’arcy Wretzky, of The Smashing Pumpkins, and she is the female voice on ‘Cancer’ and all the songs are about her; ‘It’s Gonna Kill Me’, ‘Miss Blue’, ‘Skinny’ – even ‘Take A Picture’ was written because of my behaviour as an alcoholic. I’d get in trouble and say ‘can you take my picture, cause I won’t remember?’ and she’d be like ‘you better hope there’s no fucking picture where you’re going’”. He continues, “the reissue has got a lot of extra stuff like ‘(Can’t You) Trip Like I Do’, ‘Jurassitol’, which went to number four on MTV – the highest our videos ever got – so there was plenty of music coming out of Filter, it’s just that I was having the time of my life… Dude, ‘Welcome To The Fold’ used to be twenty-five minutes long. The middle section used to be seventeen minutes long because I tripped on mushrooms and made all these crazy sounds and went like ‘mama give me my medicine’ all because I read a bunch of  books on Brian Eno and U2; U2 went into the capsule just to experiment, they didn’t necessarily try to write a hit. That’s what I did. No matter what I did, this could have been my last record. I experimented. Bit everything is my last record, I’m still that way to this day.” 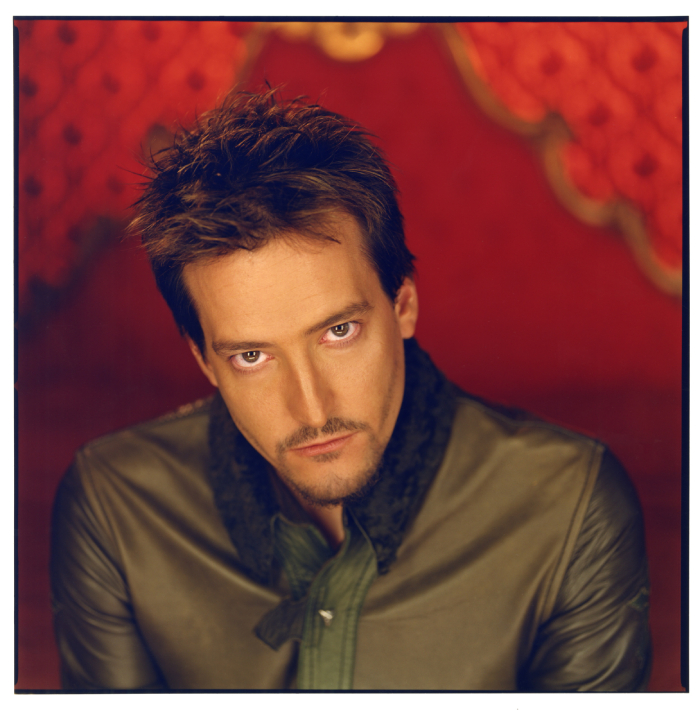 Looking to the future, Patrick hopes to do a tour where he performs Title Of Record in full, or mostly in its entirety. Beyond that, however, Patrick an early sketch of They Got Us Right Where They Want Us, At Each Other’s Throats, Filter’s next record which Patrick is aiming for a spring 2020 release. Explaining further, Patrick tells me, “And the fucking songs, ‘Thoughts And Prayers, ‘‘Murica’, and ‘American Carnage’ and it keeps going from there, and it’s all about how fucking retarded this country has got. Not only dumb enough to put Donald Trump in The White House, but also the complete, total, and absolute destruction of the Republican Party – created by Abraham Lincoln – it’s just this retard fest with their ideology, their religion, their anti-abortion shit, their small government, and their thoughts about how a woman’s vagina isn’t hers… My music is even more crazy than it has ever been, but they don’t wanna hear about it. They wanna hear about the happy and the disco while they trip on molly. Yea, trip on molly, but this time, remember to vote for the fucking Democrats, you asshole… If you’re not voting, you’re a cretin.” Patrick adds, further adding to the excitement myself and fans will have, “Anyways, it’s got all that stuff but then the rest is all weird and alternative… It’s kind of like Short Bus, partially cause I was first working with Brian [Liesegang, original Filter guitarist], but I also dusted off some of the guitars from that time too… It sounds like Filter”. Work for the upcoming record is already very much underway as Patrick would conclude our conversation as he was running late for a studio session.

While it’s easy to focus on the past while looking at a reissue, it is equally important to look at the now to gain a better understanding. Patrick seems to be in a much healthier and happier place today. He’s sober, and is good friends with Wretzky, explaining, “She is the strongest human being that I know. To this day, I talked to her last night, she’s still my pal, my friend. She kicked ass. That’s how I see the Pumpkins – with her. I love Billy, and I love James and all those guys, but it ain’t the Pumpkins without D’arcy.” Bringing it back to Title Of Record, Patrick tells me, “I like this record, I’m proud of it man. I’m glad anyone just gives a crap about it… Let me put into perspective; why did I get into music? The reason I got into music was because at one point, my only friends were my guitar and my stereo. No one could speak to me the way Joe Strummer could speak to me. I was deeply affected by music, to the point where it was like ‘oh gosh, I really hope I can do this too’. I wanted to touch people’s lives the way Joe Strummer touched mine.” As he goes on to share individual stories of soldiers who listened to Title Of Record throughout their military service and adults who resonated through Patrick’s music in their youth in living in broken homes, I can only remark that Patrick himself seems as touched by these stories as the people in them were by him. Perhaps – and after our conversation, I’m sure Patrick would agree — that is the greatest part of the legacy behind Title Of Record 20 years later, and Filter as Patrick pushes forward to the quarter-century milestone.

A passion for music has always been a part of Gerrod’s life. As a young boy, he was raised on a steady diet of the music from The Chili Peppers, Aerosmith, The Stones, Prince, and others from his mum. Raised in the GTA, Gerrod continued to foster his love for music by attending a wide range of concerts and learning the drums. His unapologetic passion for music has no bounds and has spread to a wide variety of styles, whether it be the 90’s rock that sound tracked his teenage years, the jazz he studied in university, or his newfound love for hip-hop. He recently received his bachelors in music and education from York University and is passionate about writing and reviewing good (and less than good) music. Gerrod is also the drummer and songwriter for a Toronto based rock & roll band, One In The Chamber.
RELATED ARTICLES
featuresfilterrichard patrick