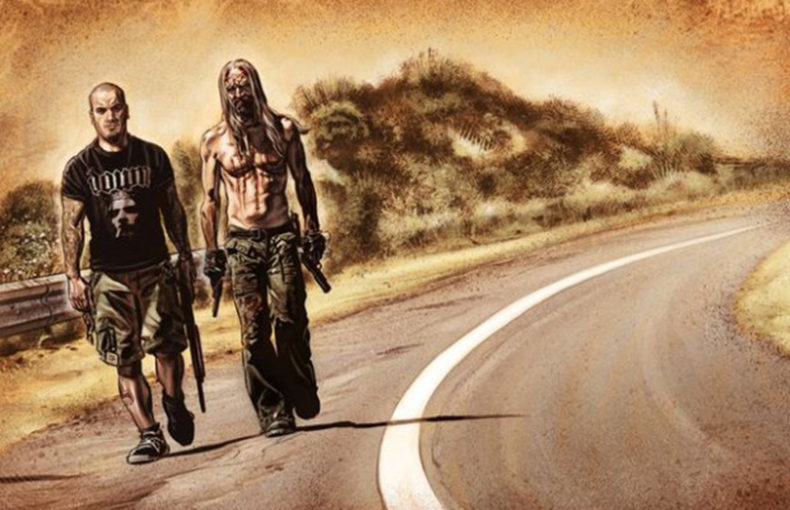 SONGS OF DARKNESS AND DESPAIR

Musical styles and collaborations are nothing new, but sometimes one does actually cause you to sit up and ask wow,” I wonder what that crazy pairing will actually sound like”? Step forward Bill and Phil-one actor from the horror film genre and one legend of the metal world. Bill is Bill Moseley probably more recognisable as the character Chop Top from such classic horror films as Texas Chainsaw Massacre, and who also starred in Rob Zombies House of 1000 Corpses and Devils Rejects. Phil is actually Phil Anselmo who would require no introduction through his many heavy musical projects dating back to his time with Pantera. Their joint musical effort is named Songs of Darkness and Despair and I was offered the chance to get inside the unique musical fusion with a chat with both elements of the project. I opened with the rather obvious question of the origins of the link up – it’s certainly not one that people would come to expect. Unlike previous interviews that I had researched from Phil it was unusual that he actually preferred to take a back seat in proceedings and let his co-host deal with the major part of the discussion.

Bill indicated that their first meeting had been a few years previously when he had been actually invited to interview Phil for a rock website ARTISTdirect.com.  They were pairing actors and musicians. The idea behind it was that the actors would interview the musicians and the musicians would interview the actors to create an interesting mix. He had jumped at the opportunity as a big fan of Pantera. Fortunately he was available, willing and actually excited to be able to meet and interview Phil. A mutual appreciation was quickly established as Bill soon realised that “he knew a lot more about horror movies than I did, let alone my knowledge of the music business” From the outset then he had nothing but love and respect for Phil Anselmo which has lasted to this day. This then progressed to the pairing creating music together which stemmed from Bill regularly bugging Phil to the point where he became pestered and actually gave in.

Phil confirmed that this was the case, they had continued to keep in touch from the initial contact and Bill had mentioned working together “every other email when can we come down and make music, when can we jam”. Finally Phil had an available weekend free and he took up the offer to try to do some music. In three days they did quite a bit and enough for a lengthy EP. Phil admitted that he did not have an idea what Bill could actually do. Three points were established that weekend. Bill could actually sing, he had great pitch and Bill was wide open as far as concepts and styles were concerned. Phil added that in addition to being a pleasure to do that the end result in his opinion is just like “getting a foot in the door”. He continued that now that he was aware that Bill can sing and is flexible that they had already discussed working further together. Phil stated that he would now be going to write something a tad more complex for Bill next time now he realised just how pliable he was as a musician. As Phil had indicated to me that Bill was a great singer, and he’s certainly no slouch himself vocally I wondered who had actually performed the vocals on the release. Had they equally divided those, or who had performed vocals on what .Phil confessed to have only sneaked in a single vocal harmony and the odd vocal “here and there”.  Bill had carried off the rest. Bill had written all the vocals and was going to sing so Phil had thought it was only fair that he play all the instruments. He invited a few friends to contribute like Kevin from Super Joint and Squizy  from King Parrot.

Bill then stated that initially he had thought that Phil would be doing the vocals. Not according to Phil who came back with “it was always going to be you”

One thing that was apparent quite early on in our discussion was the rapport and comedic interaction between the two. If they ever decide to take a break from their respective chosen primary careers then a stand-up tour of the globes comedy circuit venues would be a guaranteed success.

The songs themselves were largely brought by Bill although they did actually create one song together. Bill had provided lyrics for five out of the six songs on the EP. The sixth was created while they were both sitting around and Phil was playing a gentle haunting tune on the guitar. Bill began improvising some lyrics. ”Tonight is the night that we die”. Directly inspired by Phil’s haunting guitar melodies and that happened quite spontaneously in Phil’s studio. Phil added that he loved playing in a minor key on that tune. 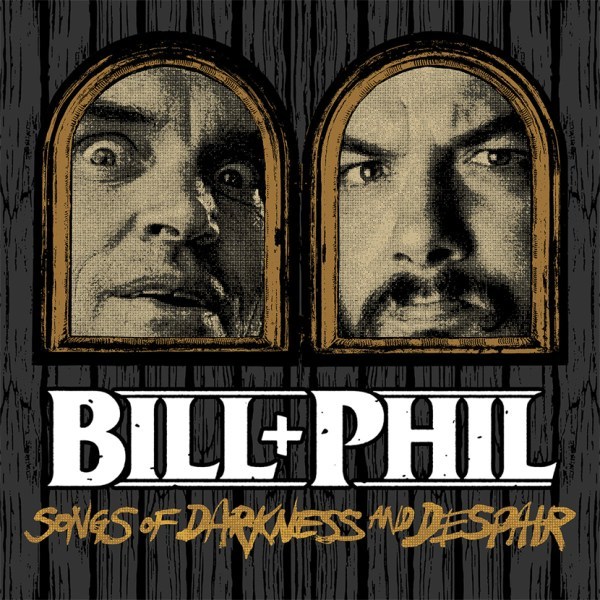 Bill had stepped into Phil’s world ie the world of music and had become a musician. Would Phil similarly consider stepping into the world of acting? I was aware that he had previously done some voice over work. Would he see that as a possibility in the future….Phil mused that it would depend on the role.  Rehearsing a bunch of lines and trying to recall those would not be something that he would be keen to do   ”I’m going to fuck it up man. ”If he was going to be in a film he would prefer to have the situation explained to him, together with his type of character and be allowed to freestyle on the dialogue. Humorously he added,  “that’s probably why nobody has called about acting jobs”  I was aware that he  had done some voice over work and a few things here and there but Phil stated that he would be willing to work on some soundtrack stuff. Unknown to many, except Bill Moseley Phil stated that he actually liked to make some quite eccentric music that most of the general populous are not even aware of and that he writes all kinds of stuff. Bill chipped in that,  “There was quite a trove ”That statement was quite surprising to me because through his many varied musical projects over the years that side of Phil Anselmo had never been fully explored or even seen. ”I make a lot of different styles of music and I guess the horror-genre style of music that can date back to be derived and influenced by the 1960s Dracula for sure.”

They had the songs so the next logical step after that I assumed would be playing the songs before a live audience. Unfortunately that would not happen due to the busy schedules of both Bill and Phil. Phil had a Superjoint tour, some shows with Scar the Illegals and so much happening musically. Bill stated that perhaps something could be organised in the future “perhaps sometime before 2020”!

Both careers that they had chosen-acting and being a musician were renowned for being difficult to sustain a long living at.  I wondered how individually they dealt with difficulties in their particular career paths.  Phil responded with “horror conventions” Bill had a different take on survival in his particular industry. Stating that the nice thing for him personally about the horror genre he seems to get more work “the older and uglier I get” It was what the public seemed to want and he considers it ”dumb luck”. He was still a fan of horror movies himself and was more than happy to take roles to both get him out of the house and also to make a living. If he was associated with a particular genre however I put it to him that there may be a danger of him becoming typecast. Would he not prefer to be challenged by trying different things?  Bill then recounted a tale while working on the Disney movie White Fang where he had voiced a similar opinion. To which he was told. ”You would be lucky to be typecast”. Phil Anselmo then added that the legend Boris Karloff  had done voice overs for The Grinch who stole Christmas but yet when people mention him it’s the horror genre that they associate him with. Bill stated again that he enjoyed what he did and that actually the horror genre was one of the most flexible. Phil added that it was also the most sustainable, horror lasts forever”

I was eager to find out how both men viewed their own quite extensive career bodies of work. Bill humorously stated that he viewed his own with a mixture of pride and relief and that he looked forward to making more.   Phil was in total agreement. Wrapping up as their own introduction had been through their interviewing each other I asked who would  they like to sit down and personally interview.  Phil’s reply focused on two musicians of differing musical genres – Nick Cave and Diamanda Galas. Bill Mosely’s nomination was also a musician Buckethead (who he had also previously collaborated with musically).  Quite an entertaining discussion between two men that one would not expect to have quite such a union. Their music is hard to define ,but definitely seems to have pushed and stimulated both of them in quite a different direction and well away from what people expect from them. Pushing boundaries and overcoming preconceptions -The Songs of Darkness and Despair authors are also quite amusing.

I'm a 40 + music fan. Fond mostly of Rock and Metal my staple-musical food delights. Originally from Northern Ireland I am now based in the UK-Manchester. I have a hectic musical existence with regular shows and interviews. Been writing freelance for five years now with several international websites. Passionate about what I do I have been fortunate already to interview many of my all time musical heroes. My music passion was first created by seeing Status Quo at the tender age of 15. While I still am passionate about my Rock and Metal I have found that with age my taste has diversified so that now I am actually dipping into different musical genres and styles for the first time.
RELATED ARTICLES
bill & philbill moseleychop top texas chainsaw massacre

by Gerrod Harris on January 26, 2018
Philip H. Anselmo & The Illegals Choosing Mental Illness As A Virtue Housecore Records Philip H. Anselmo is not one to sit still for very long. While [...]
7.0

by Elijah Jimenez-Clarke on January 20, 2017
Bill & Phil Songs Of Darkness And Despair Housecore Records Something dark and heavy emerged this week from the minds of an unlikely duo. Bill Moseley, a cherished horror-film [...]