Features
551
previous article
SPILL CANADIAN MUSIC PREMIERE: SWANSEA - "JUST LIKE IT USED TO BE"
next article
SPILL FEATURE: SONGS OF DARKNESS AND DESPAIR - AN AMUSING DISCUSSION WITH BILL MOSELEY AND PHIL ANSELMO OF BILL & PHIL 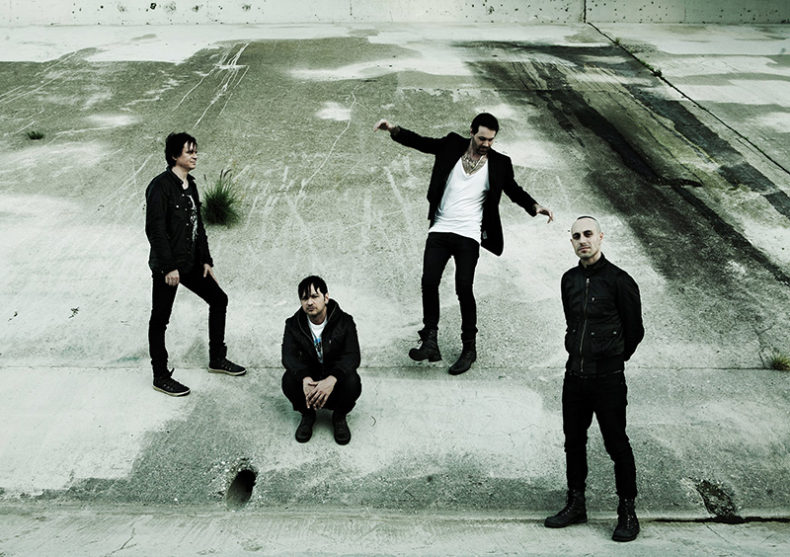 AN INTERVIEW WITH AMIR DERAKH OF JULIEN-K

Amir Derakh has had a varied and colourful musical career. From eighties hair metal, through nu metal Orgy, and then ultimately to industrial music, where he today finds himself within the Julien-K moniker, with long-standing musical partner Ryan Schuck. Bypassing styles and musical genres he clearly is a man with a varied and quite eclectic personal musical taste. I was curious if he could recall his initial introduction to music from his earliest memory. After a brief pause to gather his thoughts, Amir recalled hearing a song by the Edgar Winter group called “Frankenstein”(1972) on the radio which just mesmerized him. The part that most caught his attention was the synth that had produced all the unusual noises on the song. The cool guitar playing also he recalled by Rick Derringer. 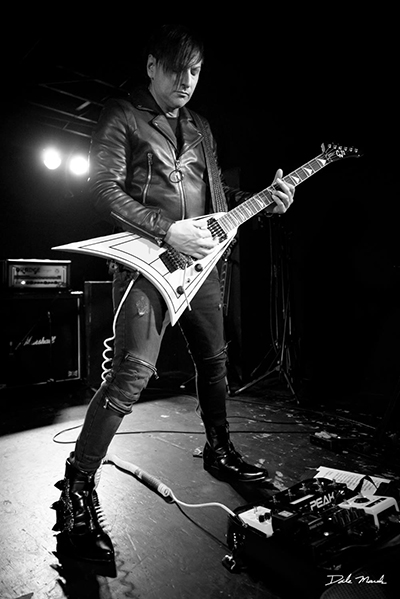 In the eighties, Amir relocated to Los Angeles, and during his time there he replaced Craig Goldy in Rough Cutt. At that time hair metal/rock was at its peak. There was a huge scene in many US cities. This was replicated in many countries around the world. MTV was in its infancy and there was an air of excitement and enthusiasm all around. I often had wondered how it would have been to have been a part of all that and to have actively made a contribution to that musical period and scene. Amir recalled that he was really fortunate to be able to catch the tail end of that. He was twenty years old and quickly learned how to play the guitar. He had only been playing for a couple of years at that point but he was really into the whole LA metal scene as well as being equally into new wave. Amir was a fan of the English and German metal bands, such as the Scorpions and Judas Priest. He also loved the LA metal bands of that era like Motley Crue and Ratt. He mixed listening to that with the Cure, and New Order. Laughing he adds “I had a pretty eclectic taste you could say”. That statement in a nutshell seemed to sum up Amir’s entire musical career. He got the Rough Cutt job at a young age but pays respect to all of his band mates at the time. He was given the opportunity to tour with Dio all over the world and describes the period as being amazing and that he was super grateful for it.

I pushed Amir further on the element of rock that he said he was still fond of, asking could he then see himself in the future maybe releasing a second Dead By Sunrise album (the rock band that he was in with Chester from Linkin Park). Amir said that the decision on that would stay with Chester himself as his full time job meant that he was generally pretty busy with Linkin Park taking up most of his time. They have discussed that actually several times but that band is actually a very good example of eschewing a more rock and roll sound as Chester’s musical roots lie in punk and also rock. He was very proud of the band’s album and if a follow up was to be done then it would be very similar in musical style. 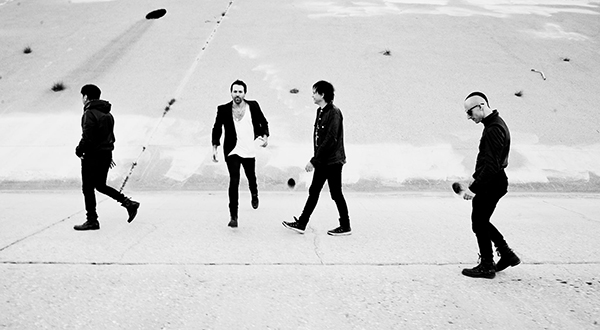 Returning to Julien-K, he stated that they were always pretty experimental and were currently preparing to release a very ambitious project which was almost completed. They would be launching an Indiegogo campaign for “The Time Capsule-A Future Retrospective” a four CD box set spanning the entire career of the band to this point. It will be sixty plus tracks and would be something that their fans have been asking for for quite some time. After that project the band would be looking towards a new record which they had actually already started working on entitled “Harmonic Disrupter”.

Over the course of our conversation Amir had talked about both of his job roles — as musician and also producer. I wondered if Amir saw those roles as operating in tandem or did one give him more enjoyment than the other. He was unable to separate the two roles — stating that he had many opportunities to just go down the producer route. However Amir stated that if it had been purely for financial reasons then that would have been the path that he would have chosen as he could have probably made a lot of money in a producer role during the nineties. First and foremost though he saw himself as a musician and an artist — being able to create his own music and being able to share that with the world is his first passion. Being a musician was therefore more important to him if he had to choose between the two roles. He hinted that he did have some amazing offers which he had to turn down because he was in a band. Amir also stated that he was a very loyal person to the people that he worked with whether that was as part of a band or to a client that he was working with. 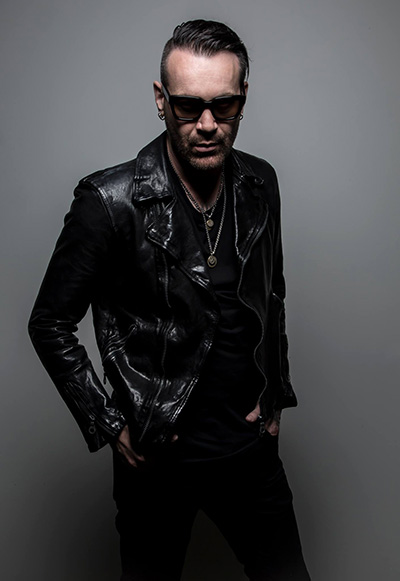 In partnership with his long-standing band mate and friend Ryan, Amir had branched out into the restaurant business. As the music business and industry is becoming increasingly more difficult for musicians to generate an income, I asked Amir if he felt that it was vital for musicians to expand their professional and work portfolios in order to survive and make a living. He replied that quite a few years ago they had seen where the music industry was going and it wasn’t being destroyed, it was instead being reinvented. They knew that it was coming and like any business it had to go through a process but it wouldn’t be overnight. Every artist had to figure out what works for them because there are so many different ways to do things now that they had to figure out what was to work for them personally. Even in terms of crowd funding he explained that it took Julien-K quite some time to figure out how to present themselves. Initially they didn’t feel comfortable with it as they had seen a few bands fail at it which they obviously didn’t want to do. They took their time to figure it out and then adopted the best approach. It was based on an honest approach to their fans and we have done something interesting, so it wasn’t just a cash grab. We pretty much make the records ourselves, and then offer it to our fans as a pre-sale. Other bands on the other hand have to make the record and then it may be a year before the fans get anything. Its all about if you can take the chance yourself and make the record then you have something physical to show and people can get excited. Its not a big mystery and people are actually presented with something and can be a part of. I asked Amir why specifically had they chosen to go into restaurants, as an alternative business venture. Apparently they had examined several types of investment opportunities but required one that would still allow them to be creative in music. They needed to find a way to support themselves when things got lean in the music sector. Retail as an option was quickly rejected and they saw the restaurant trend happening and thus decided to pursue that direction. They were a lot of work at the start but they learned from experience to the extent that now their restaurants are making a profit. Like making music, restaurants also involve a lot of creativity and a lot of love with the right people so in that respect it overlaps with what Julien-K does with their music.

With so many of Julien-Ks musical influences coming from the UK, I was curious as to why their touring schedule over the years had barely scratched the surface of that particular fan base. Like many bands before them it came down to a simple case of economics. The influences had formulated their sound but unfortunately they had been unable to tour extensively in that part of the world. They had only played UK two or three times as Julien-K, the whole package had to be just right. Amir had alluded to a busy work schedule, but outside that

Music was always a career path that he was destined to pursue and follow, it seems. Reflecting on his career Amir stated that he was most proud of the fact that he had been able to stick to what he had believed in — sometimes it had worked and sometimes it didn’t. He had been fortunate to be able to do what he had wanted to do and create what he had wanted to create. He had avoided stepping on anybody along the way and had not burned too many bridges. Amir concluded “We are very lucky to be where we are right now”. The longevity of his musical career seemed to bear out his basic philosophies of work and life which certainly appeared to have come a very long way since his time as part of the eighties LA metal scene.

I'm a 40 + music fan. Fond mostly of Rock and Metal my staple-musical food delights. Originally from Northern Ireland I am now based in the UK-Manchester. I have a hectic musical existence with regular shows and interviews. Been writing freelance for five years now with several international websites. Passionate about what I do I have been fortunate already to interview many of my all time musical heroes. My music passion was first created by seeing Status Quo at the tender age of 15. While I still am passionate about my Rock and Metal I have found that with age my taste has diversified so that now I am actually dipping into different musical genres and styles for the first time.
RELATED ARTICLES
amir derakhfeaturesjulien-k