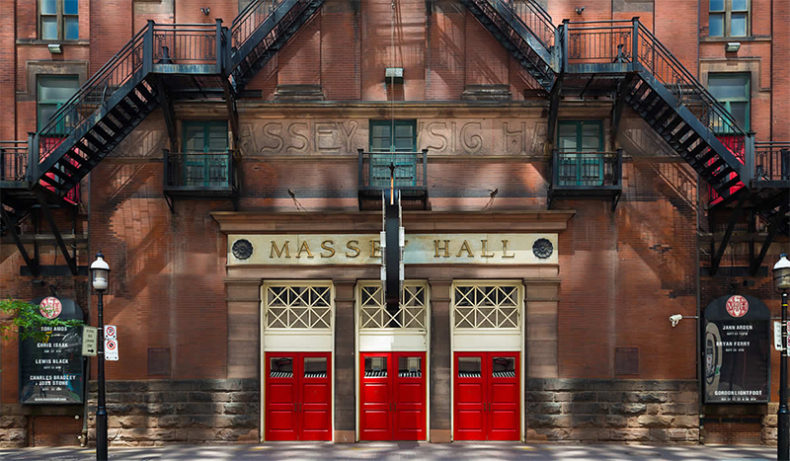 Toronto’s Massey Hall was recently spotlighted as a part of Myseum’s Music From People City series. A truly unique experience for those who visited the iconic concert hall on the morning and afternoon of Sunday November 12th as they toured the hall’s backstage areas before hearing of the rich history of the venue from Toronto musicologist extraordinaire, Rob Bowman.

Upon walking into Massey Hall, you are greeted not only by the venue’s friendly staff, but also by a series of large frames mounted on the lobby walls. Within each frame is a series of photographs, flyers, and newspaper clippings of the various performances that have occurred since the opening of the venue in 1894, originally under the name of Massey Music Hall. All was included from the venue’s orchestral and symphonic roots to the inclusion of theatre, ballets, and guest speakers- ranging from Canadian feminist icon Nelly McClung to William Hitler’s pre-WW2 anti-fascist warnings- and of course the legendary artists of modern popular music who have graced the hall within the last seven decades. This includes a diverse list of jazz legends including Miles Davis and Herbie Hancock; folk pioneers from Bob Dylan along with Canadian folk icons of the likes of Joni Mitchell and Neil Young; and rock superstars such as Keith Richards (“sans Mick Jagger” as the photo was captioned), Bruce Springsteen, Chris Cornell, and Prince. Like a museum, this segment was as immersive as you would like it to be as this could be a cursory flip through over a hundred years of cultural history, or it could become a much deeper experience as you carefully comb through each frame only to continue to be astounded by all that Massey Hall has seen. Following this, the guests were invited to walk through the backstage corridor- where they could see a Lego replica of the building as well as peek into their two dressing rooms- as a means of passage towards the stage where the lecture was hosted.

While only scheduled to speak for twenty minutes, Rob Bowman went into an incredibly engaging presentation that ran for roughly an hour. His lecture was presented in a tone that was accessible to those who knew little of the venue and its significance as a Canadian cultural monument (it was the nation’s first designated music hall) as well as an in-depth look at how the venue shaped and reflected the changing of culture and entertainment throughout its existence. He also provided enough personal stories about Young, Bob Marley, and Dylan to give super fans a sense of- depending on their age- nostalgia or vicarious envy. His presentation was overflowing with information ranging from fun facts- like how the venue hosted boxing and wrestling matches before the floor was lined with cement in a renovation during the 1930s- to information that demonstrated how the arts are often inseparable from various social factors- like the fact that both balconies at the venue are much closer to the stage as per request of Hart Massey, a Methodist Christian who was inspired by the design of such churches, which also explains why Massey Hall was originally created to be a space exclusively for music and not the theatrical arts.

When displaying the cultural value that Massey Hall brought to Toronto and to a greater extent, Canada, it is important to note that Massey Hall brought about the formation of the Toronto Symphony Orchestra and the Toronto Mendelssohn Choir, both of which would become world renowned ensembles that would attract guest composers and conductors from across the globe, including Stravinsky. Bowman continued to demonstrate that while different artistic mediums began to find permanent homes around the city, Massey Hall continued to thrive and gain a global reputation as a world class music venue that often leaves artists in awe. For this, he cited jazz trumpet icon Dizzy Gillespie who was apparently blown away during the sound check for a concert he performed there in 1953 with an ensemble of jazz heavyweights including Charlie Parker, Max Roach, Bud Powell, and Charles Mingus- who would take the tapes from the show and would later release them under the title, Jazz At Massey Hall. This concert is not only referred to amongst jazz literature as being the best jazz concert ever, but, as Bowman described, it played a large role in giving Massey Hall a name with equal weight to that of New York’s Carnegie Hall.

The acoustically perfect venue, as determined by the recording of the dissipation of sound following the firing of a gun, has become a quintessential element to Toronto’s vast culture. Bowman’s presentation was not only wildly informative, but beyond intriguing as he shed light behind some of the stories of the venues greatest events and overarching evolution in a culture that is in constant motion. Bowman left no doubt that Massey Hall is in fact a cultural landmark that pushes Toronto in terms of being a musical city. While every major city has its stadiums and arenas, few have such an intimate and hip venue that perpetuates culture all on its own and only one city has Massey Hall. We tend to look at culture as a societal trend and observe how it effects a population as a whole; however, it is ultimately Bowman’s energy and unbridled passion that made this presentation a truly exciting experience as well as a reflection of the effects that culture can have on an individual when one dedicates their life to chasing such passion.

A passion for music has always been a part of Gerrod’s life. As a young boy, he was raised on a steady diet of the music from The Chili Peppers, Aerosmith, The Stones, Prince, and others from his mum. Raised in the GTA, Gerrod continued to foster his love for music by attending a wide range of concerts and learning the drums. His unapologetic passion for music has no bounds and has spread to a wide variety of styles, whether it be the 90’s rock that sound tracked his teenage years, the jazz he studied in university, or his newfound love for hip-hop. He recently received his bachelors in music and education from York University and is passionate about writing and reviewing good (and less than good) music. Gerrod is also the drummer and songwriter for a Toronto based rock & roll band, One In The Chamber.
RELATED ARTICLES
featuresmassey hallmusic from people city