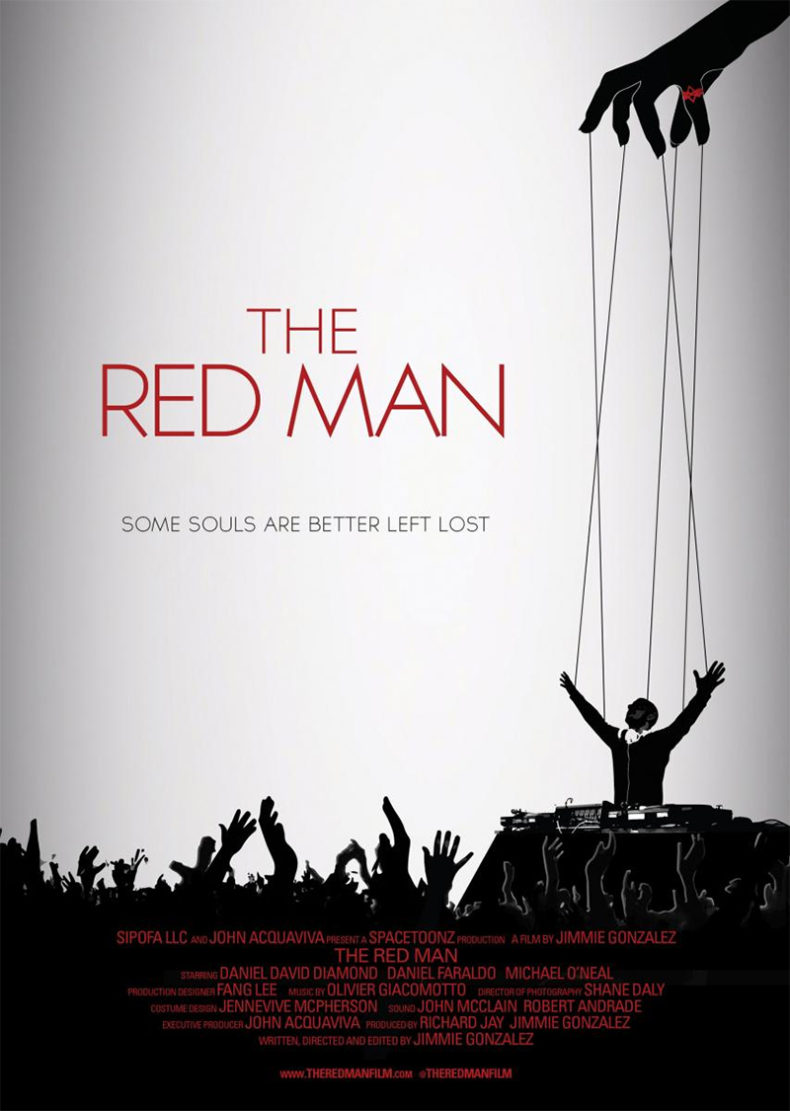 “This film is a surrealist Faustian tale in DJ clothing,” Canadian dance music pioneer and Executive Producer John Acquaviva says, as he unpacks the dense Jungian layers of his latest project, The Red Man. This award-winning independent Psychological Horror, Art-House film, directed by Jimmie Gonzalez (Howard Stern on Demand (2005) features Shane Daley as cinematographer. It was released on October 25, 2016. A Director’s Cut, with an extra 25+ minutes of footage, will be released by year’s end.

The Red Man is described as “a psychological mystery about the ecstasy and depravity in the life of a contemporary DJ [touching] on the mental health issues in the EDM industry.” But it is much more than that. The Red Man follows protagonist Evan Gough (Daniel David Diamond), an aging, iconic DJ whose decade-long career has caused him to spiral downward. On the surface, the film reflects the shallow, pill-induced, mind-numbing club experience from a renowned DJ, whose fame and lifestyle has caused an empty depression in him. This, coupled with the grisly murder of his family, has taken a toll on Gough’s psyche and showcases the fragility of ego and id, and the mental unraveling that can occur with PTSD. Acquaviva, whose 20-year career as a DJ and music producer, denies the film is about him but rather a meditation on the psychological undoing that occurs to people after experiencing a horrific act.

The Red Man is a dizzying, detail-crafted film. It takes a deep detour, recalling One Flew Over the Cuckoo’s Nest with paranoia-inducing conspiracy theories about big pharmaceutical companies. The film is also a long homage to Horror films. Unfolding in a dreamlike sequence that recalls staying up in a club all night on bad drugs, the film is essentially set in Gough’s mind. Vivid set design details such as a Salvador Dali-esque clock in Gough’s maze-like apartment, strange characters throughout his building and the subtle Freudian/Jungian references in his psychiatrist’s office reveal fitting unconscious symbolism. The bold red and black colours of Gough’s apartment, a secret room, various DJ clubs and a grueling, bloody rape scene (reminiscent of Slasher films), mirror the inner hell and demons that Gough is being forced to face throughout the film. These darker scenes are juxtaposed with a dreamy, bubblegum colour palette of Gough’s family, who is brutally murdered at the opening of the film in a flashback sequence. Gough’s mother’s Pollyanna personality mirrors the fakeness criticized in any party scene, while her eerie, happy-turn-psycho personality echoes Gough’s own personal nightmare of his mind coming undone.

“The mind is fragile,
everyone wants to be a hero…”

Acquaviva and Gonzalez chose to cast unknown actors to better represent the “every-man DJ.” The Red Man co-stars DJ Rapp, who plays Gough’s psychiatrist’s secretary and aide. The film’s interlocking plots are interspersed by surrealist Joderovsky Prullansky-inspired sequences of faceless, naked women and men running towards the camera against a white background, often in and out of doors painted different colours. Acquaviva says these doors are representative of the chakras and Path to Enlightenment, as well as the obstacles of consciousness. I extend the metaphor further to the doors of the psyche and Jung’s dark night of the soul, which is gaining popularity with the global trend of meditation and mindfulness.

“The mind is fragile,” Acquaviva says. “Everyone wants to be a hero, and this film shows what happens when you wish for fame and success and it causes you to unravel.” I ask him and Associate Producer/DJ/Graphic Designer of the film jacket, Jonathan Coe, if the film was to openly address the growing issues with drug addictions and mental health that the club scene can bring – issues that are being spoken about more openly. “The drugs in the film are a metaphor for the addiction to the adrenaline rush of playing to a crowd as a DJ,”Acquaviva explains. “We originally were going to use Rock ‘n’ Roll but DJ culture is more current. The rush a DJ or star experiences, there’s nothing like it.” Coe agrees.

When asked how to avoid falling into this inevitable trap of the ego or of selling out, another theme hinted at throughout the film, Acquaviva replies “being famous, being surrounded by groupies can make a DJ lose sight of the bigger picture. It becomes about trying to keep your soul. But the broader question is what is your place in the world? As humans we always want to know what makes us special; we all suffer from the hero/icon complex.” In this sense, The Red Man reveals its art-house narrative. It is more than a simple, B-movie on DJ culture.

“Like any art, The Red Man is designed to stir conversation,” Acquaviva continues. “It is a psychological thriller about coming unhinged and a mental breakdown. It truly is a Faustian tale cloaked in DJ’s clothes,” he repeats.  “It reminds the everyman, be careful of what you wish for.”

The Red Man is now available on Video on Demand.
Purchase on iTunes HERE.

Talia Wooldridge is an avid music lover, composer and ethnomusicologist who contributes artist interviews, live concerts, festivals and album reviews for Spill Magazine. She has written extensively on the intersection of music, personal identity and cultural symbolism with an early focus on Latin American Hip Hop and female Cuban rappers. In her spare time, Talia writes, composes music and manages Music Can Heal, a non-profit that brings live, award-winning musicians to inspire healing in hospitals, hospices and communities in need. Her next project is an interactive music-travelogue exploring music cultures and music travel around the globe. Follow her here: www.taliawooldridge.com + www.movetoyourownbeat.com.
RELATED ARTICLES
featuresjohn acquavivamovies