SPILL FEATURE: THE PUNISHMENT OF LUXURY – A CONVERSATION WITH ANDY McCLUSKEY OF ORCHESTRAL MANOEUVRES IN THE DARK 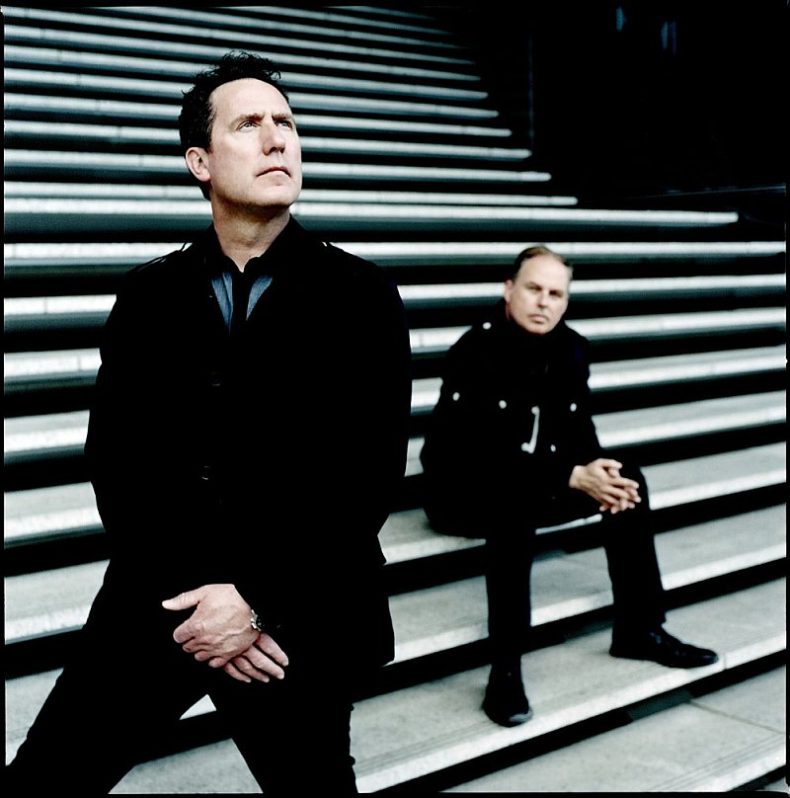 THE PUNISHMENT OF LUXURY

A CONVERSATION WITH ANDY McCLUSKEY OF ORCHESTRAL MANOEUVRES IN THE DARK

I am on the telephone with Andy McCluskey of Orchestral Manoeuvres In The Dark (OMD) and I tell him I saw the band the last time they played Toronto.

“Were you at the first show, or the one where Malcolm died,” he asks quite seriously.

You may remember that show on July 19, 2013 at The Danforth Music Hall. The temperature on the stage hit 45 degrees Celsius. Malcolm Holmes, drummer extraordinaire for OMD since the beginning did not feel well.

“It was hot on the stage, we had a couple of fans, but the AC was not working. I was not doing my crazy dancing, just walking back and forth. I felt like I was melting. Malcolm says he needs some air, and collapses. He flat-lined for four minutes, but Toronto Paramedics were there quick enough to use the defibrillator and brought him back. Malcolm cannot play with the band anymore and we miss him. I talked to him the other day and he is doing well.”

No one can say life in OMD is boring. OMD started life in 1977 as The Id, after McCluskey, Paul Humphreys and Malcolm Holmes had been in other bands both together and separately. Along with the three who would go one to form OMD, there were four other members, making it seven in total. That band fell apart, and by 1978, Orchestral Manoeuvres In The Dark was formed with Andy McCluskey and Paul Humphries as the core. And by 1979 they released their debut single on the famed Factory label, with a sleeve designed by Peter Saville. They would form a long term relationship with the now famous artist. The single “Electricity” caught the attention of fans and record companies and soon the band was signed to Dindisc/Virgin. 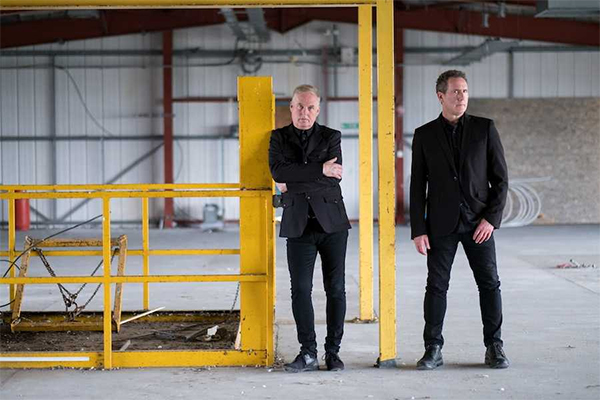 “We were very fortunate from the beginning,” recalls McCluskey. “We got to work with Peter Saville and he imparted on us the idea that if you are going to make beautiful music, package it nicely and make sure the sleeves are designed well.” Something the band continues to do to this day.

In 1989, three quarters of the band splintered off, and with Humphreys formed The Listening Pool, while McClusky soldiered on with the OMD name and scoring more hits in the U.K.  By 2006 the band reunited with the classic line-up performing to sold out crowds. Soon they were back in the studio and the result was the classic 2010 album History of Modern.  Since then the band has recorded two other studio albums, toured a great deal, released live albums/DVDs and continue to produce new music. Their new album, due for release on September 1, 2017 is called The Punishment of Luxury.

“The title comes from a painting I really like that I have seen in the Walker Art Gallery in Liverpool. It is by this artist Giovanni Segantini. Now the meaning of his title is very different from our meaning, his is more of a misogynist meaning about ‘about a bad mother in purgatory’, while our meaning is that at this time we, the western world, have everything we need, and more. Materialistically we are better than ever. We don’t have to worry and yet we are unhappy. Materialism has replaced the imagined order of religion with the real order of marketing. If my car is over five years old, or the newest fashions or the biggest house, we are failures. We define ourselves by our material gain.

“As an artist you want to reflect the human condition, so this is what we write about. I mean, we have done and do songs about wanting, craving, losing love, but we want to avoid the cliches. We like to challenge ourselves.”

And this is where OMD stands out with their contemporaries, they have continually issued new music and new albums, which have been extremely well received by fans, critics, and the listening public.

“That is why it takes us longer between albums. We want to write and produce something interesting. We are not limited by the guitar/drum thing. And at this point we want to push the envelope, we always did. We have achieved what we set out to achieve, to verbalize our feelings and thoughts. But it does get harder and harder to push yourself into new territory. We use a lot of different sounds, now nine out of ten times it turns out shit, but it is worth the effort to create something.” 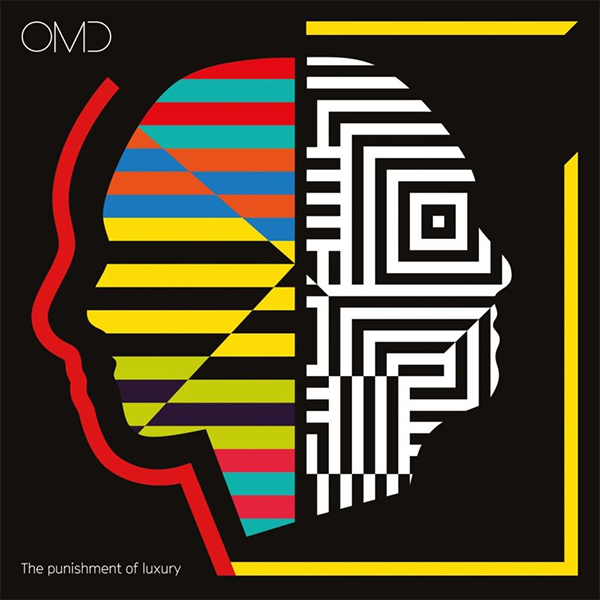 PRE-ORDER THE PUNISHMENT OF LUXURY VIA THE OMD WEBSITE

The Punishment of Luxury does not disappoint. Their creative use of sound and sound effects is inspiring.

“The song ‘As We Open, So We Close’, we recorded a lot of noises for that one and then add a melody. We glue it together and we have a song. Same with ‘Isotype’, that started as a two minute piece about symbols and typographic information and Paul comes up with a melody. Now I think, ‘bloody hell, now I have to write lyrics” and I do and the song is not about what I set out to write. But it is fine, it is a great track” (and the the lead-off single for the new album).

As with six releases, The Punishment of Luxury is on their own independent label.

“If we are on a major label, we are perceived as a ‘heritage act’, and no one is going to spend a million dollars for an album or video, so we pay for it all and license it out to the company that will get the album out there, and we retain all the rights…very important. The best part is we release it when we are ready, no deadlines or pressure. We are in control.”

After all these years, it is the music, art and creativity that keeps this band going. Sure they would love a chart topper, but that is not their drive.

“I just finished this book, Eating The Dinosaur [by Chuck Klosterman] and he wrote a chapter about Weezer, but it applies to us as well. He basically says that an artist is talking to themselves, and the audience/listener can feel like he is talking to me. As an artist you are trying to explore different ways of expressing their thoughts. But really the artist is having a conversation with himself and the listener can listen and buy into sharing this dream or conversation or not. This is why fans can go from loving you to hating you because you may not be speaking to directly to them anymore because you veered off into something to somewhere else.

“We are looking at the sharp contrast of machinery and man. The juxtaposition of these things create a melancholy music. Our last album, English Electric, was about how science was supposed to make us all happy, and failed. We know we are making unusual music”

OMD have continued to make interesting and incredible music and their new album is no exception. A brilliant album full of unusual sounds and sometimes unusual subject matters

“The track ‘La Mitrailleuse’ [French for “The Machine Gun”] features a synth track of machine guns” remarks McClusky. “And ‘Art Eats Art’ is about pop culture consuming our history, with vocals shoved through a vocoder. I am sure people will be wondering why we added some and do not mention others…”

So, the world can now enjoy The Punishment of Luxury and here in Toronto we can look forward to a concert in April/May 2018 (“Because Malcolm didn’t die” McCluskey reminds me).

Born and raised in Whitby, Aaron discovered music through his love of The Beatles. This led to a career in radio, writing for various publications, and ultimately a radio show about The Beatles (Beatles Universe), which ran for over four years. When not immersed in music, Aaron enjoys spending time with the loves of his life -- his wife Andrea, and daughters Emily and Linda (all of whom have an intense love of music too).
RELATED ARTICLES
andy mccluskeyfeaturesmalcolm holmes
8.0