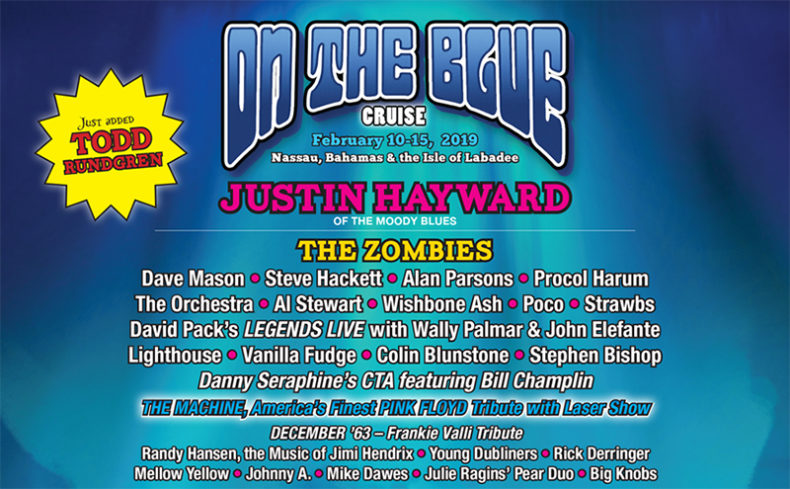 SHIPPING OUT WITH ROCK ROYALTY

I never realized I liked Todd Rundgren until he rocked the pool stage aboard the On the Blue Cruise with “I Saw the Light,” a totally unexpected version of the Classic IV’s “Stormy” and a bunch of other powerful songs that I’d never heard before but I sure could bop to.  Then, once I attended Todd’s Q&A session a couple of days later, I realized I LOVED Todd Rundgren and his exceedingly blunt assessment of things like The Rock & Roll Hall of Fame: “I came in at #3 in the fan vote.  They picked #1, #2, #4, #5, #6 and #7.  But I’m heartbroken…for LL Cool J—five times a bridesmaid and never a bride.”

Discovering or re-discovering artists is a big part of the On The Blue rock music cruise that, until this year, was The Moody Blues Cruise (but with only Justin Hayward featured on this sailing, I guess “The Moody Blue Cruise” didn’t have the same cachet).

For the past five years, this annual music sail has been bringing rock ‘n’ roll royalty to the high seas, featuring along the way artists like The Moody Blues, of course, along with Roger Daltrey, The Zombies, Lighthouse, The Orchestra, Vanilla Fudge, Strawbs, Renaissance, Alan Parsons, Dave Mason, Jefferson Starship and more.  And not only do fans get to enjoy full concerts by their old and new favorites but they can listen in to Q&A sessions, take part in photo ops, and often have a few drinks with their idols at the bars and lounges around the ship.

On the most recent sailing aboard Royal Caribbean’s Mariner of the Seas which sailed February 10 from Miami to Nassau, the Bahamas, and Labadee, Haiti, Justin Hayward and fans welcomed back cruise favorites The Zombies, Alan Parsons, Randy Hanson, Al Stewart, The Orchestra, Strawbs, and more, and got their first shipboard glimpse of Procol Harum (who would have thought that hearing “A Whiter Shade of Pale” live could make a grown woman cry??), Wishbone Ash, Steve Hackett and Poco.

Details of the 2020 On the Blue sailing are yet to be announced but as a veteran of all five of these phenomenal shipboard music festivals, I have no doubt that the organizers will, again, assemble a lineup of rock & roll legends that will certainly float our boat.

The Spill Magazine is a Toronto-based online publication dedicated to covering the independent music scene with a strong focus on our thriving hometown talent. Our writers bring you up-to-date news, in-depth features on musicians and reviews for the latest CD releases. We also travel to the front lines for all local festivals including Canadian Music Week and North by Northeast. Don’t forget to check out our Facebook and Twitter pages for all daily Spill updates.
RELATED ARTICLES
alan parsonsalan parsons projectdave mason