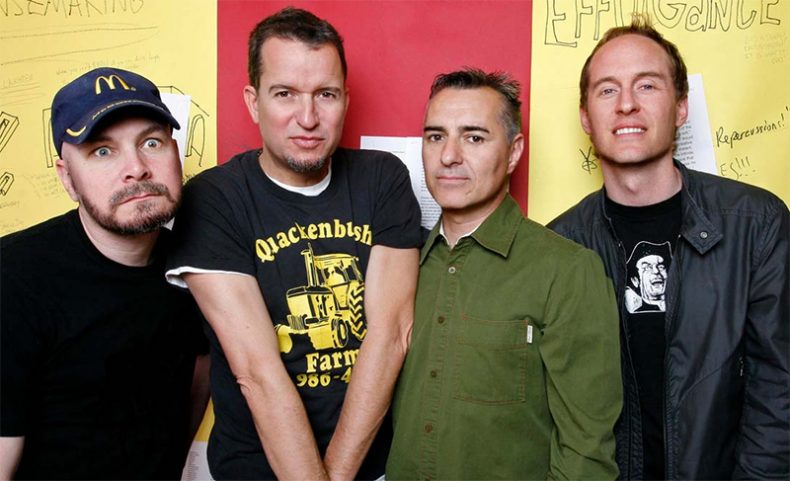 NO CLICK TRACK, NO EDITS – 25 YEARS OF LIVE FAST, DIARRHEA

If you’ve listened to the radio even once in the last two decades, you’ve heard Josh Freese. As one of rock and pop’s most respected and go-to session drummers, he has been a part of bands including A Perfect Circle, Nine Inch Nails, Devo, and Guns N’ Roses to name a few, and has joined artists like Sting, Katy Perry, Miley Cyrus, and Michael Bublé on stage and in the studio. What sparked our recent conversation, however, was The Vandals, a SoCal punk band from the ‘80s, best known for their contributions to the genre and influence on the upcoming wave of pop punk through their output in the ‘90s. In particular, their seminal album, Live Fast, Diarrhea took the centre stage in our discussion as it recently hit its 25th anniversary, and for the first time ever, has been released on limited edition, coloured vinyl.

Released on May 1, 1995, Live Fast, Diarrhea is a fast-paced, unbridled, and unadulterated exercise in punk rock. With standout tracks like “Let The Bad Times Roll”, “Get In Line”, “And Now We Dance”, and a cover of “Supercalifragilisticexpialidocious”, The Vandals feel fresh, refined, and distinctive, even a quarter of a century later. Speaking on the making of Live Fast, Diarrhea, Freese explains, “Even though you can laugh off the name of the song, or a lyric, it was a comedic angle on life coming from an innocence and honest point of where we were coming from… The Vandals never stood a chance of having a big hit record and knowing that, while taking it seriously, there was never a pressure about making a big record… At first, especially when I was really young, I’d have this naive notion that the record is going to be on the radio all the time – the things you dream of as a kid – but as time went on, especially in the punk rock genre, I quickly stopped striving for that and it was more like ‘let’s have fun and make the best record that we can’ – I think we would have made the same record whether we had a $500 budget or a half a million dollar budget.” Freese continues, “I was starting to do a lot of session work for other artists at the time, but I went into the studio wanting to do things not worse than I would, but I wanted to do one take, at most two for a song, no click track, no edits, and if there’s a fuck-up, then there’s a fuckup. That’s how it went down and we didn’t want to fix things to make them sound quote-on-quote perfect or quote-on-quote really really good. Let’s save making things perfect for the other hundred records we’ll make. It was more like an experiment.” Listening to the record now, Live Fast, Diarrhea is a wild explosion of bombastic, youthful energy that paints a vivid picture of Orange County in 1995, with Freese adding, “there was no pressure, no ‘we should do it this way, we should do it that way’, we weren’t banking on any crazy notion of becoming famous…there is a definite unadulterated fun and rawness to it.” 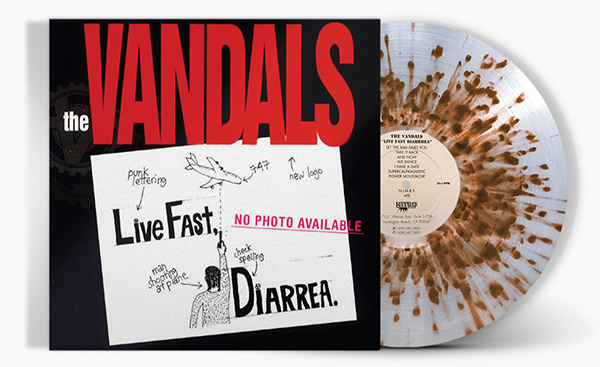 Live Fast, Diarrhea was released at a pivotal time when the pop punk genre was beginning to emerge. Alongside The Vandals, bands like The Offspring and Blink-182 were releasing their debut records. Similarly, Smash (1994) and Cheshire Cat (1995), respectively, were also recorded and released in DIY fashion. Having formed over a decade prior to the release of Live Fast, Diarrhea, it is easy to see the influence that The Vandals had on the new wave of punk rock; however Freese humbly rebuts, “you know what? It’s tough to say. I guess the answer is ‘I don’t know’… Maybe another band may be able to tell you but that scene was real close… The Offspring, Blink-182, yeah, we played shows and toured with them. They grew up with us, they were great kids and were fucking hilarious” That being said, it is clear that Live Fast, Diarrhea marks a breakthrough point for both The Vandals and early pop punk as a whole. While they may not be credited for this often enough, Freese shared one of their biggest and most surprising supporters, “The one real old school rock legends who has always supported us, of all people, is Alice Cooper… All I could figure was that his kids would play it for him and he’d hear it and go ‘well this is cool’ same way I am with my kid – but he’d say more than once ‘man, you know who’s great? That band from Orange County, The Vandals. Bands like The Offspring and Blink-182, they owe everything they do to The Vandals’ – I don’t agree with it, I wouldn’t say it, but I’ll let Alice Cooper think it!”

“When you’ve made records this long with so many people, you have records you love, and others you don’t… This is one I can always look back on a feel truly proud of what we did” Freese tells me. 25 years later, it is clear that The Vandals were truly onto something with Live Fast, Diarrhea, a record driven by unabashed youthful energy and blisteringly fast songs that would set the bench mark for pop punk for the late ‘90s. As Freese explains, “It was a labour of love, and I hope that shows. That record to me, it was real honest and real pure of–even though it’s silly–where we were coming from. Something that really stands out to me about that record, is that it’s been a fan favourite for a long time, and for me, it really captures the band at a great time in our career before everyone started getting bogged down with real life and shit. It’s got a crazy edge to it and I love the spirit that it has.” The passion and the genuine excitement truly show through, even a quarter of a century later making Live Fast, Diarrhea a beyond fun thrill ride of a record.