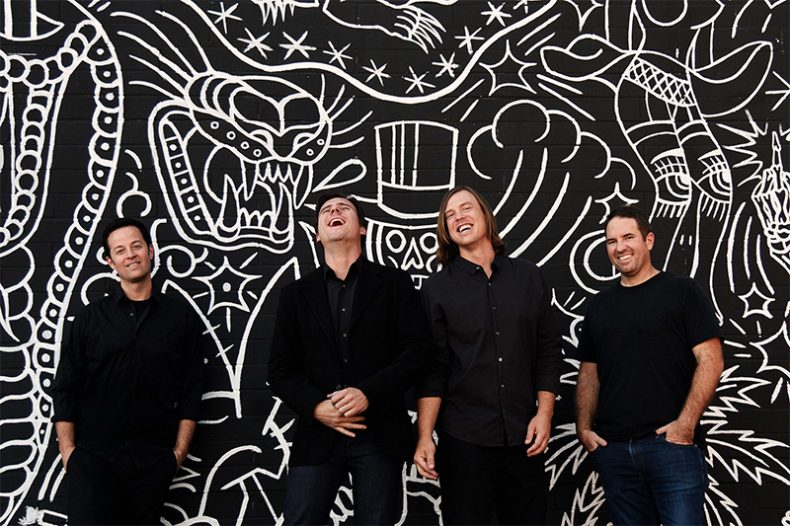 23 years and 8 albums later Jimmy Eat World haven’t slowed down a bit. Gearing up for the release of their ninth album Integrity Blues the alt rockers stopped by Toronto for a packed performance at the city’s TURF festival. Before the show Zach Lind (drums) and Rick Burch (bass) sat down with us for a brief chat about the new album and how the music industry has changed since they first started out.

Spill Magazine: Your upcoming album, Integrity Blues, is your ninth album. As a band how do you feel your approach to writing a record has changed?

Zach Lind: I think over the over the years probably the thing that’s changed the most is that we as group have learned more about the recording process and technical side of things. We’ve become more independent. Whereas before we would rehearse in bedrooms and living rooms, We know have our own space in our hometown (Mesa, Arizona). We can write there and rehearse there. We’ve recorded albums there. We can do all of that in one space and it affects the creative process. You’re more fully realizing your ideas, which can be both good and bad. But it just feels like we’re not relying on other people as much during the process.

Spill Magazine: So with these subtle changes in your approach do you think the messages or the subject matter you write about has changed slightly as well?

Rick Burch: The way I see it is that Jim (Adkins, lead vocalist and lyricist) writes mainly about subject matter that is real and things he sees around him. That aspect I don’t think has changed. But our lives have changed. We find ourselves in different situations now than we did 15 years ago. That is where the change lies. But as far as the reality and the honesty, that’s always been there and won’t ever go away.

Spill Magazine: What are some of the themes of the new record?

Zach Lind: The overall themes I think are, in really general terms, dealing with perspective. You live this life and you have this vision of what your life should be. And you either don’t meet that vision and you’re really disappointed or you get to your goal and have this feeling of now what? I think the record explores the perspective of that, trying not to get so caught up in the outcomes. Being a little more present to the things around you and the things in life you might be under appreciating. Shaking off the constant disappointment of “this didn’t happen” or “this did happen and it didn’t make my life awesome like I thought it would.”

Spill Magazine: Integrity Blues marks the second album to be released through Canadian label Dine Alone Records. As an American based band what are some of the challenges of working with a label from another country? Zach Lind: For us it’s awesome. We feel like we have people who like our band and are passionate about our music, and they’re from here (Canada). For us it feels good to have a label like Dine Alone because we feel like we’re being represented well and they’re the best people and the most knowledgeable people to get our music out there.

Spill Magazine: For a while Jimmy Eat World was a band that would go back and forth between being an independent band, and a band with label representation. What were some of the challenges you faced as an independent group?

Rich Burch: The challenges were really welcomed by us because we saw that time as being very free. We parred everything down to being just a band. There wasn’t any other involvement. We had no management, we had no label, and a lot of people might think of that as frightening, but for us it was vert freeing. It gave us the creative space to create and album like Bleed American. Overall it was a very free and creative time for the band.

Spill Magazine: How would you compare being in the label system to being independent?

Zach Lind: Obviously with the label there’s a lot of infrastructure there that helps you get the music out there. It’s a bit more of a support system when it comes to marketing a releasing new music. But it’s a double edged sword. There are really good and bad things about being both and independent artist and with a label. With a label there is a sort of machine that you work with. But for us it’s sort of been the best of both worlds. For example we wrote and recorded Bleed American as independent artists, but it was realised on a label, so we’ve had experience in both systems. I think we prefer having the support that comes with having a label that is dedicated to getting your music out there to as many people as possible. 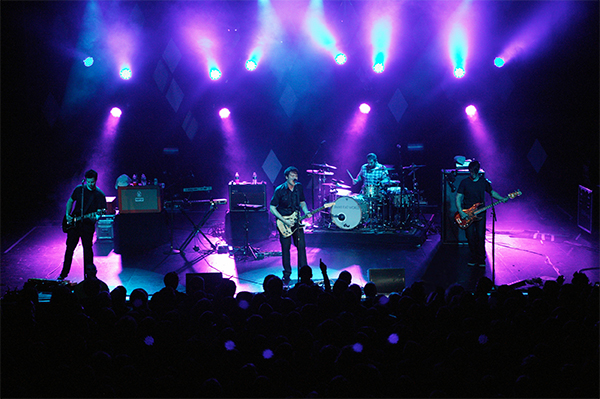 Spill Magazine: Are there challenges for newer independent bands coming out today that you as a band never had to face?

Rick Burch: Yea it’s totally different these days. It’s really tough because anyone can record music and broadcast it to the world from their bedroom. You don’t need a whole lot of equipment to do that. There’s a lot more music out there. It makes it more difficult to cut through it and have your sound heard. But at the same time it’s great as a listener. You can go all over the world and investigate new sounds and find new stuff. That’s also good for the bands because a kid in Germany discovering music from as far away as Ottawa or Mexico City. That would have been impossible 20 years ago without the internet to share music worldwide.

Spill Magazine: How does it feel to see the kids that grew up listening to your earlier music entering adulthood and reembracing that early 2000s alternative/pop punk scene with themed bar nights and dance parties like Homesick, based around yours and your contemporary’s music?

Zach Lind: Anyone that is appreciating our music in any context is something that we’re eternally grateful for. It’s flattering that the stuff that we made a long time ago resonates with people. It’s a lot of fun and people are enjoying it. Everyone loves to go back and listen to their favourite records from growing up and this sort of seems to be a more organized version of that.

Spill Magazine: For you, what are some of the records that sort of take you back in time that you still love listening too?

Rick Burch: Any of the Jawbreakers like Dear You, anything by Fugazi.

Zach Lind: There was a band called Girls Against Boys that we listened to all the time back in the earlier days. We actually just played with them at RiotFest and they’re still amazing live. Elliot Smith was another guy that we all loved.

Spill Magazine: Do you have any advice for those bands that might be touring from city to city in a run down van similar to how Jimmy Eat World started all those years ago?

Rick Burch: It’s really easy to cater to what you think the outside world might like about your music. Try and ignore that and just do what makes you excited. Make the music that excites you first and the world will follow along eventually.

Zach Lind: Be ready to work your ass off (laughs).

Photographer by choice, writer by necessity. Since moving to Toronto in 2011 Morgan has become an active member of Toronto’s music scene. On any given night he can be found at various venues with his camera in hand. There’s nothing he loves more than exploring all the venues this wonderful city has to offer, discovering new bands and genres along the way.
RELATED ARTICLES
dine alone recordsfeaturesintegrity blues
7.0