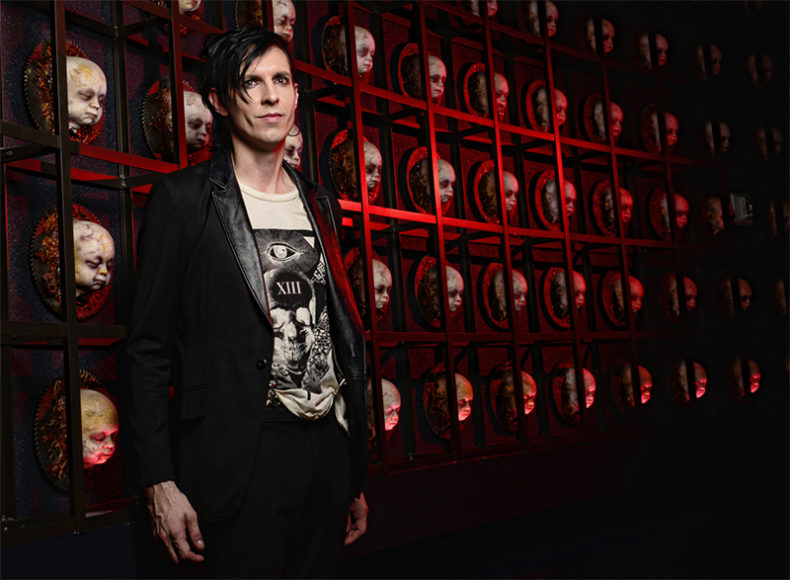 A CONVERSATION WITH CURSE MACKEY

Curse Mackey, known for his contributions to Pigface and My Life with the Thrill Kill Kult as well as his time as the frontman for Evil Mothers, releases his first solo album, Instant Exorcism on Negative Gain Records on 10 May.

The 11-track collection was written and recorded with contributions and co-production provided by Chase Dobson, known for his engineering and live production work, notably with Rhianna and Kanye West; as well as a special guest appearance (via guitar) by Ronny Moorings from Amsterdam’s Clan of Xymox.

The album’s title gives a first hint of the religious imagery to follow.  Opening with the steady, dark beat of “Submerge”, the distorted vocals start out slow and gain speed as the track progresses, providing a goth-infused electronic foreshadowing of the rest of the album.  The whole collection vacillates between slower beats on some tracks and catchier choruses, the latter of which start with “O’Blasphemy”, a song that despite its dark-sounding name seems relatively innocent (although I didn’t catch any references to leprechauns as may be suggested by the “Irish-ing up” of the title).  “Dystopian Dope” is another strong track with intense imagery.  It sounds like he’s got some sort of echo effect on his vocals, which makes the lyrics sound that much more mysterious and powerful. The back and forth between singing and almost spoken lyrics makes for a really interesting track. 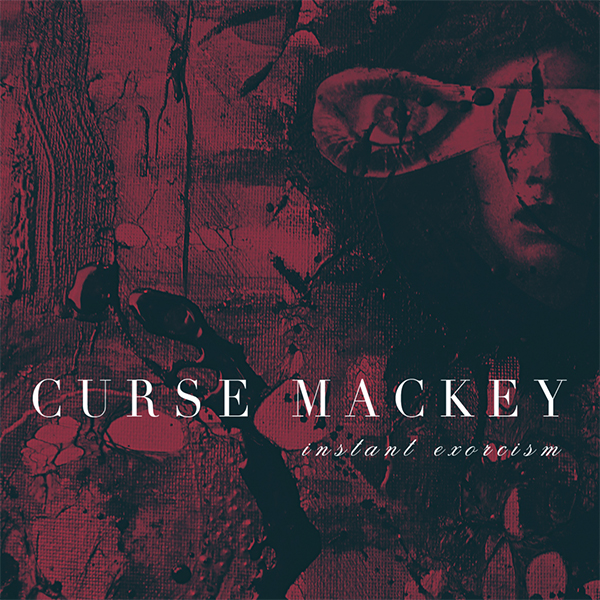 The production on the album helps to maintain the listener’s attention, although frankly I think the lyrics do that by themselves.  There’s an amount of vocal distortion, but just enough to keep things interesting and give it a signature sound.  “There is a lot of metaphorical lyrical passages, double entendre innuendo and wordplay which I’m very interested in as well as image-wise, I’m very intrigued by ,and have always been into speculative or science fiction writing,” Curse comments about the common thread of spiritual symbolism and imagery.  “I grew up in south Texas in San Antonio and that sort of religious iconography was very prevalent along with Mexican folk and religious art… there was a lot of it around when I was young and we used to go to church a lot…my grandparents were very active in their church and I think that that was almost in the water, so to speak, when I was a kid.  I’m still fascinated by the ornateness and the iconography of religious art and writing. The bible with its fantastic tales of fire and brimstone as well as the metaphors used and so I think that’s infused into my art, my writing and the protagonists and antagonists within the world of Instant Exorcism …they’re part me and they’re part other people…and some of them are people that I have not yet met.”

Perhaps the piece de resistance of his career so far, the recording of Instant Exorcism took “almost a year, although there were definitely tour dates and other projects amongst that as well,” says Curse, “with a lifetime in advance.  At the end, I felt a little exposed but also now that the record is complete, I’m really glad that I was able to tap into something new artistically that I had not before.  As for all of those previous influences (he lists artists as diverse as Nick Cave, David Bowie, Ogre, Perry Farrell, and Iggy Pop) as well as the bands in which I’ve been involved…it took all of that to get to the point of making Instant Exorcism.  I couldn’t have made this record even five years ago.  I was just going through various experiences in my own personal world, all of those things had to happen in order to give me the compulsion to make this record.”

Of these musical influences or mentors, Curse cites as inspiration these heroes’ propensity to push themselves to perform better and better musically with each effort.  “When I went into making this album,” he says, “I was feeling that I was going to be making something a little more ambient, doom industrial-noise focused, more experimental and disturbing. As I began writing the songs and tapping into my own personal inner muse the lyrics really started to flow and I was kind of like ‘wow, I’m onto something really kind of different here’ that even I didn’t know I had in me.”

I have to say that overall, I really enjoyed this collection.  It’s creative, it’s clever, it’s catchy in the right parts and dark and moody in others.  I’m hard-pressed to choose a track that really stands out, because frankly, most of them do in their own right.

Curse also enjoys success in his careers as a DJ, promoter, producer, curator, and writer.  I have no idea how he finds the time to keep up with it all, but I hope he’s able to continue!

Kathy Nichols, from the land of cheese and beer, has been writing off and on since elementary school. Her passions include hugging trees and trying to make a positive difference in the world, to which end she completed a degree in Mass Communications coupled with Environmental Science. Kathy appreciates all types of music, mainly industrial and punk and the like (especially bands who use their fame and fortune to try to make social or political statements), but with a little bit of Beastie Boys and Billie Holiday thrown in to switch things up a bit. She is the owner and CEO of www.industrialstrengthpublicity.com and enjoys long walks on the beach and (skinny) puppies.
RELATED ARTICLES
featuresmy life with the thrill kill kultnegative gain

by Gerrod Harris on June 16, 2021
THE ITALIAN STALLION A CONVERSATION WITH GUITARIST & INVENTOR DEL CASHER If you’ve ever turned on a radio in your lifetime, you’ve likely heard [...]