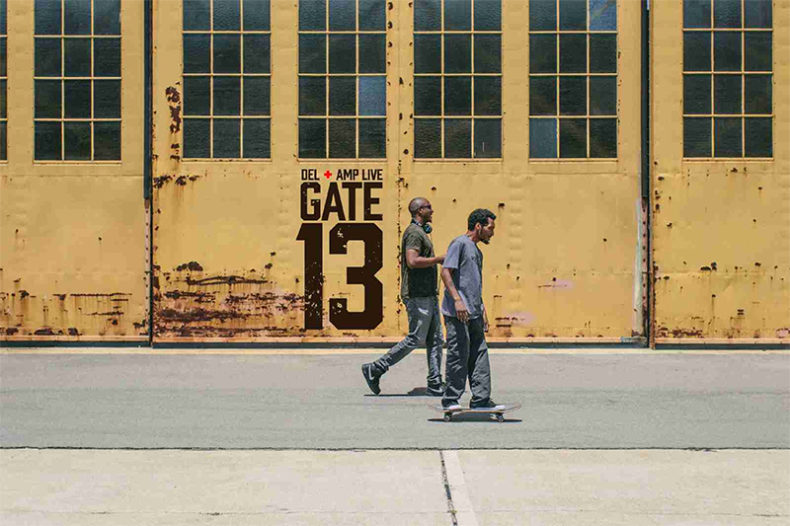 A CONVERSATION WITH DEL THE FUNKY HOMOSAPIEN AND AMP LIVE

Del the Funky Homosapien and Amp have both been in the music industry for a long time and have had many past projects. Del is mostly known for his verse on Clint Eastwood by The Gorillaz and Amp’s Rainy Dayz Remixes album where he remixed Radiohead songs. Del and Amp have come together for their upcoming LP, Gate 13. The duo have travelled in the same circles for a long time, but have never really collaborated on anything before.

“Our first collab was actually a song off the Zion I True And Living album.” Amp shares. “Del did a verse for us, and then with me personally. The first one is the video tapes remix for Radiohead, he got on that, that did pretty well on that album.”

Both Del and Amp pursue interests other than music. Amp teaches at the LA Film School and Del says he is a visual artist first. How visuals impact the music and how they go about balancing both. Regarding any collars the duo might consider visually as opposed to sonically, Del feels “I’m open to anything really to tell you the truth. Nowadays I feel like music ain’t enough, I’m not saying for a fan of music but I feel like the industry has pushed music to a point where music isn’t taken seriously and it’s an oversaturation of a lot things, so I feel like you need video to even get people’s attention, because their attention gets pulled in so many different directions. So, it’s kind of like out of necessity sort of.”

Amp feels on the other hand, “I think you just have to have a brand, like you have to have something in your package that involves all those elements.”

There are new standards in the industry. The market has changed and people’s attention is being pulled in all sorts of directions, leaving artists to do a lot more than they used to. Del and Amp have been in the industry for so long now they have seen the changes with their own eyes and have experienced firsthand the new standards.

“Me personally, I’m getting older so that’s where the pressure is coming from.” Del explains. “I feel like I can do a lot more than what the listeners out there know I can do, and I want people to know, ya know what I’m saying? For me I gotta get more stuff out cause of that, I don’t feel a pressure as far as society or nothin’ like that to be seen necessarily but I guess it all works together.”

Amp on the other hand feels “I think people have ADD big time now, ya know, and so to keep their attention you have to be more consistent with your output and it requires more. And that’s not even necessarily music it’s just kinda like content to let them know that you’re there.”

The Gate 13 LP is sure to be a hit, with the single “wheel of fortune” out now, and it slaps. The duo work well together with a mutual love of funk and reggae. The album’s release date is April 20th, suggesting a certain influence to be under for the debut of the album. According to Amp, “Everybody smokes on 4/20 and, I don’t know, it’s just a significant day down here, honestly, especially now that weed’s legal in California. Kind of uh, kind of just made sense.”

The Spill Magazine is a Toronto-based online publication dedicated to covering the independent music scene with a strong focus on our thriving hometown talent. Our writers bring you up-to-date news, in-depth features on musicians and reviews for the latest CD releases. We also travel to the front lines for all local festivals including Canadian Music Week and North by Northeast. Don’t forget to check out our Facebook and Twitter pages for all daily Spill updates.
RELATED ARTICLES
del the funky homosapienfeatures