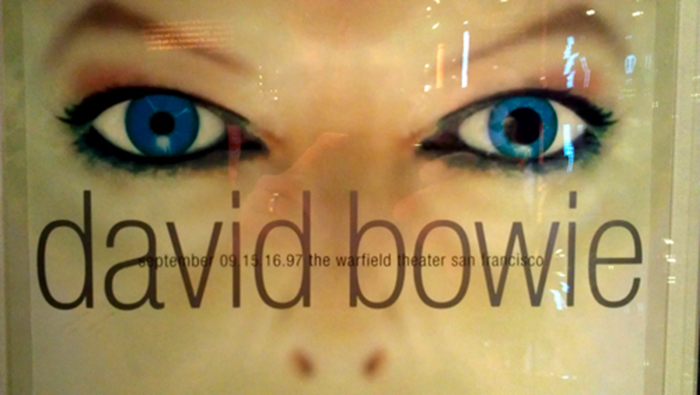 AT THE ART GALLERY OF ONTARIO

David Bowie Is, an exhibition featuring an immense backlog of the musical icon’s memorabilia, officially opens its doors on September 25th at Toronto’s Art Gallery Of Ontario (AGO). Boding successfully in London earlier this year the collection arrives to the new venue along with a wide array of authentic Bowie stage costumes, original handwritten notes and lyrics, and assorted brick-a-brack — all of which help unweave the tale of David Robert Jones and his evolution into his David Bowie alter-personae.

The pop-star/fashion-mogul/artistic-misfit’s life is highlighted spectacularly through a two-floor assemblage of personal belongings and acquisitions, the likes of which have never been brought forth to the public face-to-face. It should be told that Bowie himself remains behind the curtain with this exhibition and has simply allowed curators to promote his life and times through such carefully chosen items as handwritten set lists, lyrics and diary entries. There are over 300 objects that have been hand-picked from Bowie’s personal archives, and the multi-media presentation of these items helps to unearth the many faces of the artist. Included in the mass of memorabilia are over 50 stage costumes on full mannequin display ranging back as far as 1972 ‘s Ziggy Stardust bodysuits.

Highlights also include Diamond Dogs tour set designs, an exhibit of Kansai Yamamoto’s creative work for the Aladdin Sane tour, and an abundance of photographs from the likes of Helmut Newton, Brian Duffy and John Rowlands. Music videos fill the rooms via looped telecast, some including live performance excerpts as well as rare in-studio footage. The careful division (grouping) of these objects into themed (roomed) sections allows the viewer a clearer understanding of Bowie’s many roles throughout his artistic life. The show paints a picture of the man as a young musician, maturing artist, actor, writer, storyteller and much, much more. Featured also are storyline connections with industry peers who have worked with Bowie, some of whom have collaborated and worked alongside the artist throughout his illustrious 40-year career. Physically, the presentation put together by the AGO is nothing short of spectacular, and each room entered becomes a colourful feast for the eyes. It’s important to note the frailty of most of the displayed ‘artifacts’ — a note specifically to fans of Bowie to make the effort to see this once-in-a-lifetime show before it moves on or simply fades away.

David Bowie had released his first album in 10 years earlier this year this year, The Next Day. This follow-up presentation of the man as a singer, artist and fashion chameleon helps highlight the release and gives fans another dose of long-awaited fodder. The show continues open to the public until the end of November — suggestions to see it shouldn’t be necessary. Fan or not, this exhibition is one that will be remembered by all.

This Toronto-based artist has worked as a photographer, graphic designer, web designer and motion-graphics designer for the better part of ten years. His love of music both old and new shines brightly through his dedication to The Spill Magazine as Editor and Creative Director.
RELATED ARTICLES
david bowiefeatures