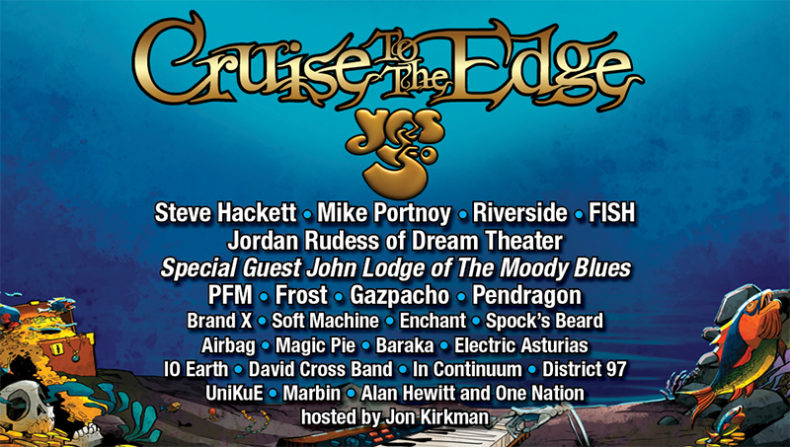 CRUISE TO THE EDGE

If there was one album that defined my teen years, it would have to be Close to the Edge.  Little did I dream that in four short decades (damn, I’m old), I would be able to CRUISE TO THE EDGE with Yes and an shipload of other prog rock masters aboard the massive Royal Caribbean’s Brilliance of the Seas!

So tune up the mellotron and shake out your cape:  CRUISE TO THE EDGE sets sail from Tampa, FL to Key West and Cozumel on February 4, 2019 for five nights of preeminent prog featuring live performances by Yes, along with:

This sailing marks the sixth CRUISE TO THE EDGE but the inaugural CTTE sailing for Riverside.  FISH, the respected former lead vocalist of the band Marillion, also makes his CTTE debut with a rare North American appearance.

In the category of WTF?, Rock and Roll Hall of Famer, John Lodge of The Moody Blues is “Special Guest” aboard the sailing.  Lodge was, of course, a staple of The Moody Blues Cruise when it was The Moody Blues Cruise but in 2019 he jumps ship to join CTTE playing solo material and Moody Blues favorites with his 10,000 Light Years Band.  Meanwhile, the other major Moody, Justin Hayward, headlines the On the Blue Cruise that sails from Miami on February 10th.  It’s enough to make your head spin…but in a very good way.  (NOTE:  All the fangirls on the Moody Blues Cruise Facebook site have taken to referring to these sailings as “The John Cruise” and “The Justin Cruise,” respectively, but you don’t have to—I sure don’t.)

Beyond the sun, fun and exquisite dining aboard CTTE, prepare yourself for Artist/Cruiser Photo Experiences, Q&A Sessions, Special theme nights and other fab fan experiences.  This year CTTE will once again feature the unparalleled CTTE Late Night Live, where fans can sign up to showcase their own musical talents in four different performance scenarios: Late Night Live Pro Jam (guests are invited to play with a headline act), Artist’s Choice (featuring fans and Prog legends performing together), The Main Event (shine with fellow Late Night Live musicians), and Overtime Jam (choose a song to be featured in a late-night jam).

Why just live on the edge when you can CRUISE TO THE EDGE in February 2019?  For additional information, visit www.cruisetotheedge.com.

What’s that you say??  You’d prefer a head-banging metal cruise?   We might have just the thing with Monsters of Rock…stay tuned for all the details, coming soon!

The Spill Magazine is a Toronto-based online publication dedicated to covering the independent music scene with a strong focus on our thriving hometown talent. Our writers bring you up-to-date news, in-depth features on musicians and reviews for the latest CD releases. We also travel to the front lines for all local festivals including Canadian Music Week and North by Northeast. Don’t forget to check out our Facebook and Twitter pages for all daily Spill updates.
RELATED ARTICLES
featuresfishfrost