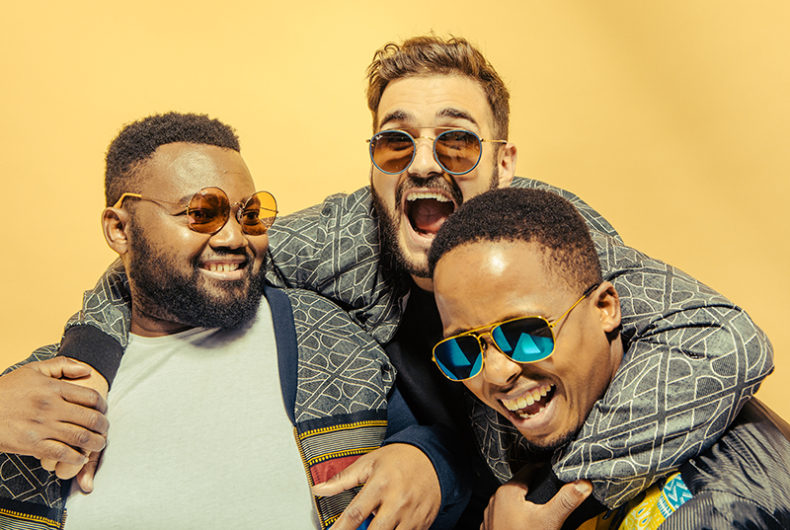 A CONVERSATION WITH J’SOMETHING OF MI CASA

Mi Casa, #NotJustAnotherLiveAct, is an infectious, soulful-jazzy house trio out of Johannesburg, South Africa. Their music is contagious, drawing from the trio’s eclectic musical backgrounds. Lead singer, J’Something (Joao da Fonseca), moved to South Africa as a child from Portugal. After working as a studio manager at SoulCandi Studios, J’Something seized a childhood desire to sing at a party in Jo-burg in 2011. There, Mo-T (son of Kgasoane Bana of South African Afropop group, Mango Groove) began playing impromptu trumpet over a house music set by Dr. Duda, a South African DJ, producer and keyboardist who has a lifelong background in gospel music. Inspired, J’Something asked Dr. Duda if he could sing. The rest was history.

Mi Casa, which translates into “my house,” quickly established an evolving urban jazz-cum-house musical style entrenched in community. “We make house music,” J’Something explains.“It’s simple but yet complex. A house is a place you have friends and family in generally. The people that support us are our family and friends. It’s one big House Party!”

The band has received numerous accolades and has even opened for Canadian superstar, Drake, who is “a huge inspiration” for the band. But Mi Casa’s initial vision was to “spread good vibes through music.”

“Even though we make dance music, the lyrical content is very personal and honest,” J’Something explains. “So life influences everything that we do because we stay true to who we are and put out an honest picture in our music: everyday life struggles, joy, etc. all play a role in shaping how we feel that particular day when we hit the studio. Our cultures, backgrounds all play a monumental part in shaping the sound that is Mi Casa. We want to spread that good energy and make music that makes people happy and dance. But has there been evolution within that sound. We’ve grown so much as musicians. You can hear this from album one to album four, which we’re releasing now!”

Familia, the band’s fourth studio album, will be featured at Mi Casa’s July 8 concert at AfroFest. J’Something declares Familia as the best music they have ever made. Although “Jika,” a track released by Mi Casa in 2014, is a steady crowd-pleaser. Familia is heavily influenced by the trio’s diverse musical tastes, including “Mango Groove, Portuguese old traditional fado, popular accordion from the streets of Portugal, instruments such as the apito, a Brazilian whistle, chants from Brazilian Carnival and samba music, old South African classic house grooves, these all played a huge influence,” says J’Something. “But the focus remains: Make a difference using the gift of music.”

Mi Casa gives back their musical success to the community by allying with Rise Against Hunger, an international non-profit organization aimed at ending world hunger by distributing food and essential aid to the world’s most vulnerable populations.

“It goes back to purpose,” explains J’Something. “It goes back to making a difference using the gift we’ve been given, the gift of music and creating a legacy. Being famous, and performing is fun and a blessing but it’s all empty unless you making a difference. We live in a continent that has been abused in the past, which has left us with a lot of catching up to do. We believe that it’s part of our purpose to make sure that when we benefit, the people that support us benefit us too. We live to improve our continent in small and big ways. Rise Against Hunger speaks to our beliefs. The youth. The kids, man. They need food. It’s simple.”

You cannot go wrong with that sentiment – it has allowed Mi Casa to grow an international fan base. But while accolades are pretty nice to have, Mi Casa remains fixed in community and happiness.

“The best thing we have achieved is to make music that makes people happy and makes us proud. Awards are there, sales are there, etc. etc. but I believe we’ve got something different,” says J’Something. “I believe we’ve got something that is fresh and refreshing. The highlight for me is deeply rooted in happiness. Cheesy, I know, but it’s the truth.”

You can catch the band on the Afrofest mainstage on Sunday July 9 at 5PM.