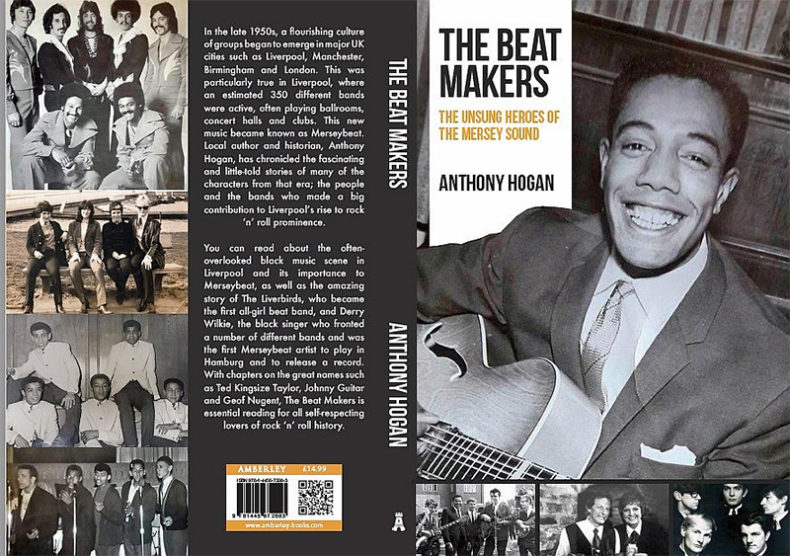 THE BEAT MAKERS: THE UNSUNG HEROES OF THE MERSEY SOUND

A CONVERSATION WITH AUTHOR ANTHONY HOGAN

Anthony Hogan is an author based in Liverpool and has written some of the most informative and unique books about the music scene in that city. By extension, this means The Beatles. In a time when just about every aspect of The Beatles has been documented, Hogan has come up with some very fresh ideas that are not entirely Beatles, but do touch that band.

His most recent book, The Beat Makers: The Unsung Heroes of The Mersey Sound, is exactly what the title promises.

“I wanted to bring out the often overlooked stories and go into bigger detail with some of the more well known characters. The Beatles are great and have proved their worth. However, there is far more to it than just the Fab Four. The musical history from that era is vast and spreads out across Liverpool and its surrounding areas. I wanted to tap into that huge unseen database, research it, preserve it, and bring it to the attention of a bigger audience. Thankfully, a number of books relating to bands or performers from that era are emerging, and this is fantastic for saving and sharing what is very important musical history. People are finally being recognized for what they did. I believe that to understand the Beatles you have to understand the people and places who walked the walk with them during those vital early years.” 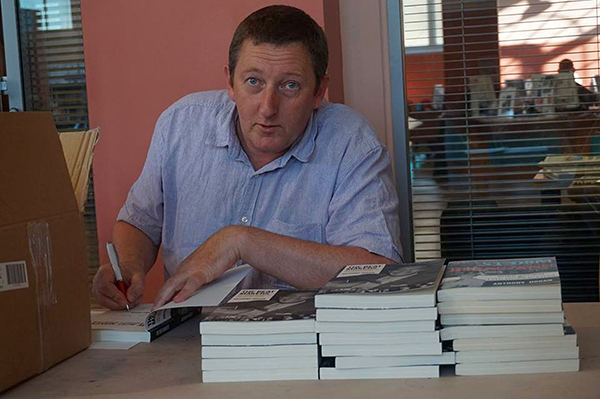 The Beatles had stiff competition in Liverpool, and according to Hogan, music was everywhere in that city. A city that was recovering from World War II, rock and roll, soul, country and music was somewhat of a saving grace.

Hogan continues “You not only had to be good to get into the top flight of the local bands, but you had to stay good and keep on improving. There was always a good number of decent bands ready to take your place. The Beatles, as The Quarrymen, Moondogs, Silver Beetles etc, they had to fight to get noticed and climb up that ladder into the top ranks. Of course, Hamburg shaped them into a much better band, but the competition in Liverpool was vital. It taught them to be tough and how to compete. You had to find ways to stand out among so much talent. You can see that they had these strengths in them once they began to record and expand. But, enough about those mop top guys.”

Hogan explores a musical city that was a huge influence on The Beatles and other bands. But it is not his first book, nor his only area of interest. Hogan has written about the two World  Wars, OCD, and Autism. He also wrote the definitive biography on Rory Storm, an overlooked musician that once had Ringo Starr as his drummer in the band The Hurricanes (From A Storm To A Hurricane: Rory Storm and The Hurricanes). Hogan is a very talented writer who also happens to be an historian of Liverpool. 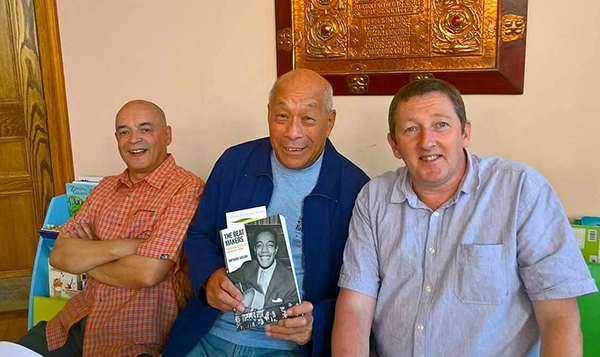 “It is my birth and home city. It is also a wonderful place to live. Liverpool was where my Swedish and Irish ancestors came to build new lives. What is there not to love? I am very proud of my city and the talent that it produces in all fields, not just music. I tell the tourist to not just do the Beatles tours but to explore the city itself. It has so much. I mean, I have lived her for so many years and I am still learning about it, so there you go. Hey! we have just been voted the friendliest city once again, so come and say hello to us. Let us not forget our buddies on the other side of the river in Birkenhead, Wallasey, and New Brighton. Their history goes alongside ours, especially with regards to the music history.”

When reading The Beat Makers: The Unsung Heroes of The Mersey Sound, I learned a great deal about Liverpool and the music scene in that city over the past five decades. It was fascinating to read about the bands, celebrities and shows that music fans had at their fingertips. Some of the bands went on to worldwide fame, while others never really broke out of Liverpool. Also of interest was the detailed information about the black music scene that existed in Liverpool. 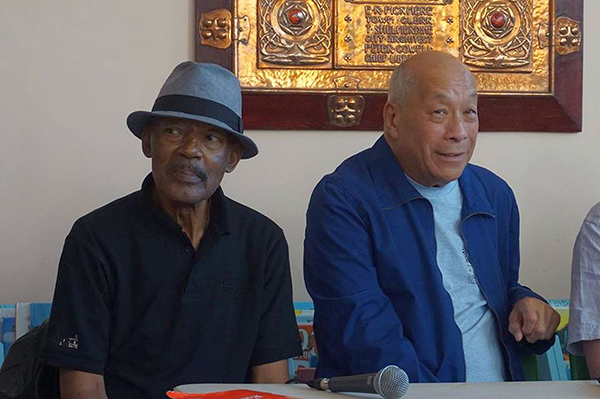 Joey Ankrah (The Chants) and Ozzie Yue (The Hideaways)

“Liverpool has a vast and diverse cultural history that spreads right across the city as a legacy of its port once being the gateway to the world. The black musicians and artists were performing here long before any of the people who you will read about in the book were born. The African-American dancer, William Henry Lane, who went by the stage name of ‘Master Juba’, performed in Liverpool in 1848. William could also play banjo and some believe he is the creator of tap-dancing. The black performers came and went on a regular basis. However, in the case of the book we are looking towards the areas of Toxteth and Dingle that spawn inland from the river in the South side of the city. This was, and still is, the most cultural area of the city. It is here that the majority of immigrants settled, my own Swedish ancestors included. Many cultures lived side-by-side, and the African and Caribbean were a part of that. People brought their music with them and shared it around. By the time that the future Mersey Beat stars were trying to get hold of a tea-chest or a washboard to join in the Skiffle craze, the musicians from the black community had already established themselves in the pubs and clubs of their own area. It was not long before those three chord wonders began to venture into Toxteth to watch and learn from the black guitar players who were all playing those fancy jazz chords. John Lennon and Paul McCartney were already linked to the area by the John’s art college and Paul’s school. Within a short time they were basically living in the area as they followed round Lord Woodbine, while watching and learning from the guitarists and steel-pan bands. The Beatles have mentioned their time in the area many times. Yet shockingly it has been ignored by many historians. I find that shameful and I wanted to bring a part of that story into the limelight. We have some incredible musical history in this city and we should be proud of all of it.”

But even Hogan can learn something when he is conducting the research. Hogan was able to learn more about an all female band in Liverpool during this time.

“The Story of the Liverbirds. Those girls were amazing and went to incredible lengths to get to where they did.  Also the black musicians. As I researched it was just story after story that was unheard . I was left wondering why I had no read about these guys in the music history books? They are legends, and truly amazing.

“Discovering so many of Johnny Guitar’s personal items was one of the highlights as I am a big Hurricanes fan. I learned things new from every chapter, be it through my own research or through interviews. This is why I love what I do. I learn and I meet so many wonderful people in the process.”

While we enjoy this book, Hogan is busy on a new book.

“Writers never give much away. I have started work on another music related book, though for now the subject will have to remain secret. There are a few plans on the go and it is a case of wait and see if anything comes from them. I receive a lot of offers to write books, though I have to have an interest in writing about a subject. I will not write just for the sake of it. I have no plans to stop writing the music books. As long as I am enjoying what I do then I will continue. I mean, I am so lucky as I get to work and hang out with my heroes. How can I not enjoy doing that?”

Background Photo: Dave Roberts (The Pressmen) Faron Ruffley (The Flamingos) Joey Ankrah (The Chants) George Dixon (The In Crowd) Paul Desson, Sugar Dean (The Valentinos). Dave Cortes is in the rear by the speaker.

Born and raised in Whitby, Aaron discovered music through his love of The Beatles. This led to a career in radio, writing for various publications, and ultimately a radio show about The Beatles (Beatles Universe), which ran for over four years. When not immersed in music, Aaron enjoys spending time with the loves of his life -- his wife Andrea, and daughters Emily and Linda (all of whom have an intense love of music too).
RELATED ARTICLES
anthony hoganfeaturesthe beat makers: the unsung heroes of the mersey sound