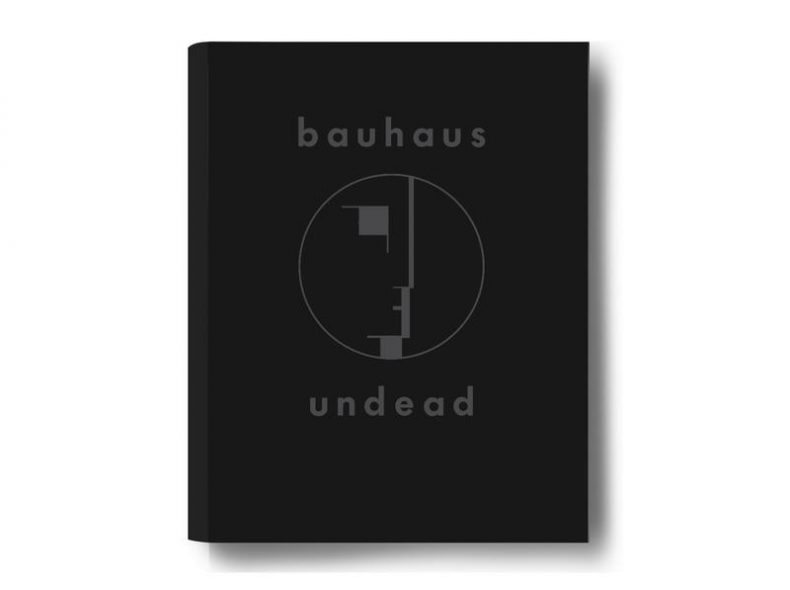 BAUHAUS UNDEAD: THE VISUAL HISTORY AND LEGACY OF BAUHAUS

Bauhaus were an English Post-Punk band, formed in Northampton, England in 1978. The group consisted of Peter Murphy (vocals, occasional instruments), Daniel Ash (guitar), Kevin Haskins (drums) and David J (bass). The band was originally named Bauhaus 1919 in reference to the first operating year of the art school Bauhaus, although they shortened the name within a year of formation. Generally considered one of the first Gothic Rock groups, Bauhaus was known for its gloomy sound and dark image. However, musically the band was quite diverse. Throughout its career, it incorporated a variety of genres, ranging from Reggae to Funk.

Although the band was short-lived, its music was influential upon many bands and artists who followed. It had a significant impact on Gothic and Deathrock artists including Christian Death,Type O Negative and Glenn Danzig. The Mission’s Wayne Hussey sang with Murphy on stage in 2013. According to Courtney Love’s technically unauthorized biography, Courtney Love: The Real Story, Kurt Cobain was a “closet Deathrocker” and his Bauhaus records were “scratched up.” Bauhaus inspired many Industrial Rock groups, like Marilyn Manson,Nine Inch Nails, Nitzer Ebb and Skinny Puppy.The band has been cited as an influence by electronic act Carl Craig,the Crust Punk band Amebix and the extreme Metal band Celtic Frost .Bauhaus was also hailed by several Alternative/Indie rock groups including Jane’s Addiction, Soundgarden, A Neon Rome, AFI, Interpol, My Chemical Romance, She Wants Revenge, Elliott Smith, The Dresden Dolls, the Flaming Lips, and The Horrors. Bauhaus influenced Jello Biafra of Dead Kennedys in the writing of that band’s 1982 album Plastic Surgery Disasters. Duff McKagan of Guns N’ Roses listed the Bauhaus compilation Bauhaus 1979–1983 in his 100 favourite albums list 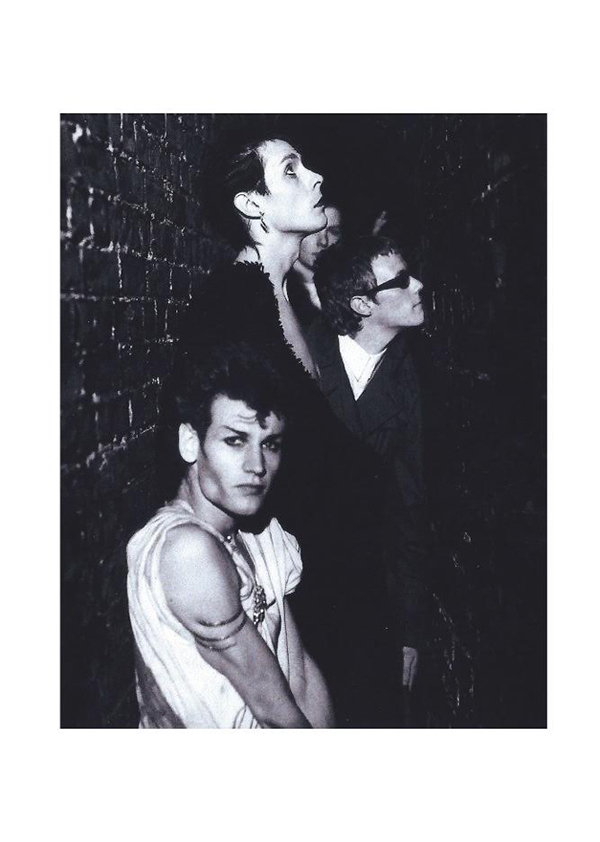 The group has been name-checked by several other prominent musicians, including Steve Albini (of Big Black), Ian Curtis (of Joy Division), Jello Biafra (of Dead Kennedys), Al Jourgensen (of Ministry,) Fred Durst (of Limp Bizkit), Jonathan Davis (of Korn), Duff McKagan (of Guns N’ Roses) Stuart Braithwaite (of Mogwai), Stephen Malkmus (of Pavement), Colin Greenwood (of Radiohead), Anthony Gonzalez (of M83 ) and Jarvis Cocker (of Pulp). Blink-182 namedropped Bauhaus on their song “She’s Out of Her Mind” on their California album. Bauhaus broke up in 1983. Peter Murphy began a solo career while Ash and Haskins continued as Tones on Tail and, later, reunited with David J to form Love and Rockets. Both enjoyed greater commercial success in the United States than Bauhaus had, but disappeared from the charts in their homeland. Bauhaus eventually reunited for a 1998 tour and again from 2005 to 2008.

Kevin has worked with the formidable design team of Jeff Anderson of Artist In Residence http://ainr.com/ and Donny Phillips and Kaylee Carrington of KIHL Studio. Together they have formulated a design that reflects the band’s art school origins to create an elegant art book aesthetic. This book will be a fitting tribute and celebration of the legacy created by this groundbreaking band.

Kevin stated that the original idea for the concept of the book wasn’t actually his own.He had no idea to actually make a book despite personally building up an extensive archive of material.A year and a half ago a friend had then suggested to him collecting the resources and compiling a coffee table book.This would allow fans and people generally to share, see, and also enjoy it. Kevin’s collection had initially started with local newspaper cuttings in the early days of the band of its first review.That was the start and he continued collecting throughout the band’s history.Unfortunately there was no chronological filing and compiling of these archives.The organization of them provided quite an arduous task with an end goal and a book as an objective.”It was just a complete mess of different stuff.” It was made easier when Kevin struck up a friendship with a guy that he just kept running into at gigs. After the fourth meeting they got chatting and Kevin shared his intention of creating a book documenting his time in Bauhaus. The new acquaintance had previous experience in creating mainly box sets for other bands and musicians — The Pixies ,Fleetwood Mac, Roger Waters and Nine Inch Nails, amongst others. His previous work made an impression on Kevin as it was quality, high end with creativity and craftsmanship. A connection and partnership was thus made. Jeff Anderson was the new business partner and he brought his passion to the project. They were joined by a designer and his wife who had formerly been the archivist of the Getty museum in Los Angeles.They gathered up all the material archived it and put it into the layout. Kevin presented a little direction in what he wanted the end result to be. “I didn’t want it to be a clichéd rock ‘n’ roll presentation. I would like it to look more like an art book. “Isolation of individual pieces, e.g. an old flyer, would help to give focus to people. This is just an example of a kind of direction that he wanted for the book.” 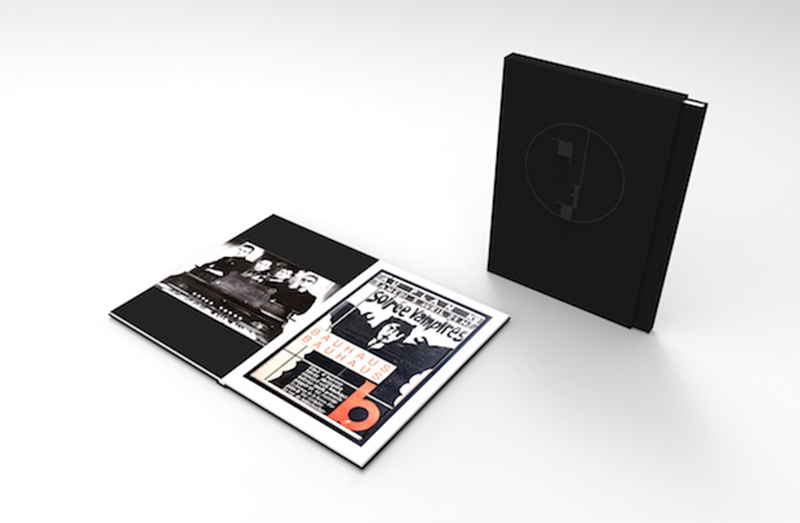 There was also an intentional decision not to make it chronological which was quite surprising and also different compared with similar projects I had previously seen. That had presented the team with a difficult decision. . . Do they follow the logical process of outlining a band’s timeline of history in sequence? Kevin felt that approach may have been restrictive in terms of its layout. A decision was then made to diversify, do something different and “mix it all up.”

A process of revisiting your own past is bound to draw up a mix of emotions both positive and negative. Kevin explained that for him he had set out to make the project a celebration of the band with a positive focus. It had marked his debut writing experience and he actually had to learn how to write. He had enjoyed the experience, however, and had made a conscious decision “not to air any dirty laundry.” He had wanted fans to just enjoy the good side of things as there was enough negativity already out there. The book contained lots of candid photographs of the band members having fun and “larking about.”

The book in coffee table format, like many similar projects, tends to reflect quality production in high end prices. Generally I find it makes the work exclusive and also limiting in terms of audience and sales. Kevin has tackled this criticism and reviewed the costing and pricing of the book. He has devised a plan to also release the book in a cheaper version..Still maintaining the quality and uniqueness of the work but at a cheaper and more affordable alternative. Kevin had decided to originally go as large as possible with the original idea. As there was a lot of posters and artwork they needed to be presented “in a big way.” This obviously impacted on the production costs which subsequently have to be offset with a larger selling price. This was not affordable to some and it was then decided to reduce ostracizing of those people with an alternative. He had decided to do this shortly after the initial day of sale. The smaller book has exactly the same content ,without a slip case and just smaller. 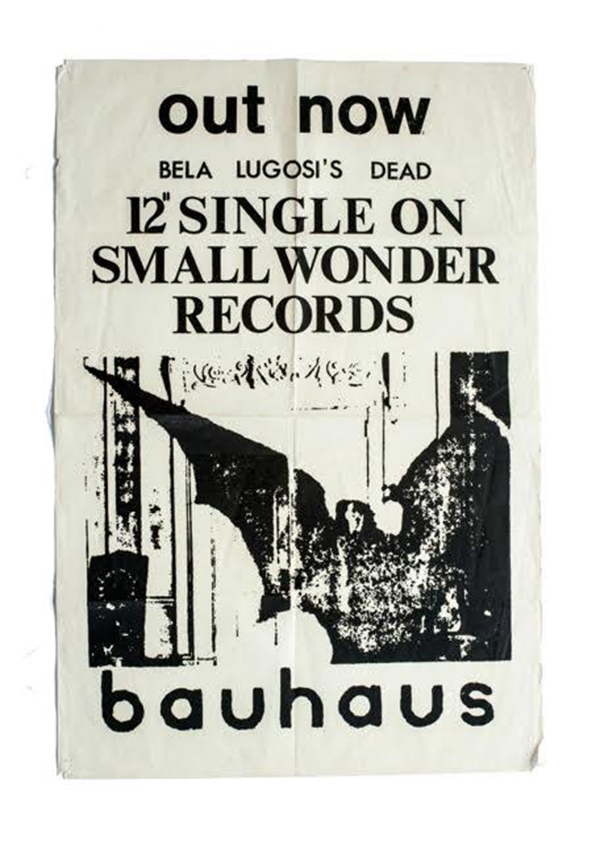 Bauhaus, as previously outlined, is generally accepted and acknowledged as being an influence on a diverse range of other artists and musicians.It, however, achieved only a small and limiting degree of commercial success. Kevin felt that when the band started that indeed commercial success was a targeted ambition.To play bigger gigs and sell more records — a dream of many bands through the years. His later band after Bauhaus — Love and Rockets (which featured some band members) did actually achieve a level of success that Bauhaus did not.It moved to play shows in amphitheatres which he found strange. None of the band members actually enjoyed that experience. It brought suddenly a different element of people, a different age group and also people that would not normally have come to the band’s shows. “It was weird actually; it was a little bit surreal.” Critical acclaim is wonderful but when the band reformed it became aware of all these other artists who were name-checking Bauhaus. Kevin personally experienced this firsthand with people like Björk, and Thom Yorke of Radiohead. This seemed to have been shocking to him as it was totally unexpected and certainly not a direct result of any huge commercial success Bauhaus had previously achieved. Kevin reached out to many of these celebrity fans in compiling the book’s forward piece to actually include them in the book. There are currently around 10, including such luminaries as Massive Attack, Jane’s Addiction, and Marilyn Manson, amongst others. The band’s writings of heartfelt beautiful things was personally very gratifying and unexpected. A lot of theses artists are  liked by Kevin so he had found their respect and approval particularly humbling.

Book writing certainly is not going to herald a complete change of career for Kevin. He is still involved in music and composing for films and television. He is taking mentoring in order to branch out and write music for movies, which is totally a new area for him. That has proved surprisingly more difficult than he had anticipated. However, working and promoting the book has”consumed me,” he says.

I often wonder what starts musicians on their own particular journey and individual road. Similarly, I enjoy artists recalling their own personal introduction and first experience. There is a widely held story that seeing a particular show by Punk legends the Sex Pistols had been his own catalyst in that respect. Instead, Kevin shared that his own interest was piqued by “That Bowie performance that everybody writes about on Top of The Pops.” It astonished him and “the whole thing, his look, his music and sexuality was just fascinating” — it caused him to think that “(I) want to be a part of this.” 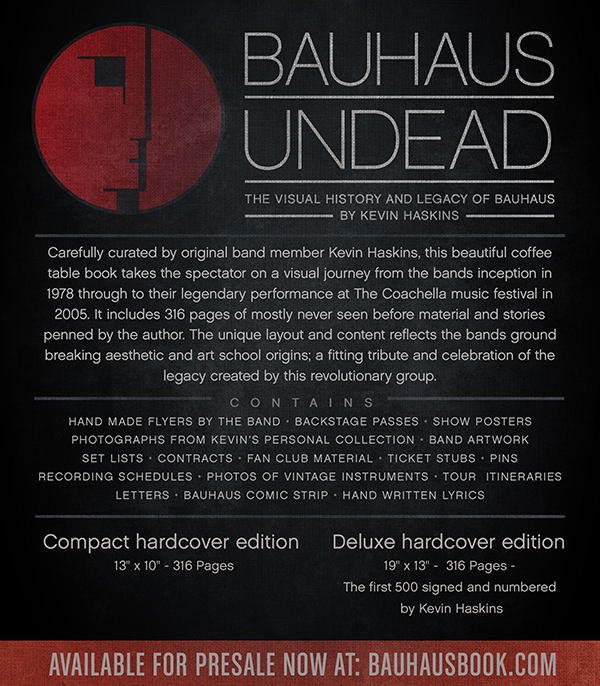 As a recognized musical innovator himself Kevin then touched on one of his own personal musical icons that he would like to personally interview would be Björk.

While a native of the UK I was obviously previously familiar with the name Bauhaus but wasn’t fully aware of the extent of their musical influence. Our conversation highlighted many of my own personal musical heroes. It has motivated me to further explore the art and also the music of the band itself, the band who has inspired my own heroes.

I'm a 40 + music fan. Fond mostly of Rock and Metal my staple-musical food delights. Originally from Northern Ireland I am now based in the UK-Manchester. I have a hectic musical existence with regular shows and interviews. Been writing freelance for five years now with several international websites. Passionate about what I do I have been fortunate already to interview many of my all time musical heroes. My music passion was first created by seeing Status Quo at the tender age of 15. While I still am passionate about my Rock and Metal I have found that with age my taste has diversified so that now I am actually dipping into different musical genres and styles for the first time.
RELATED ARTICLES
bauhausdaniel ashdavid j
9.0