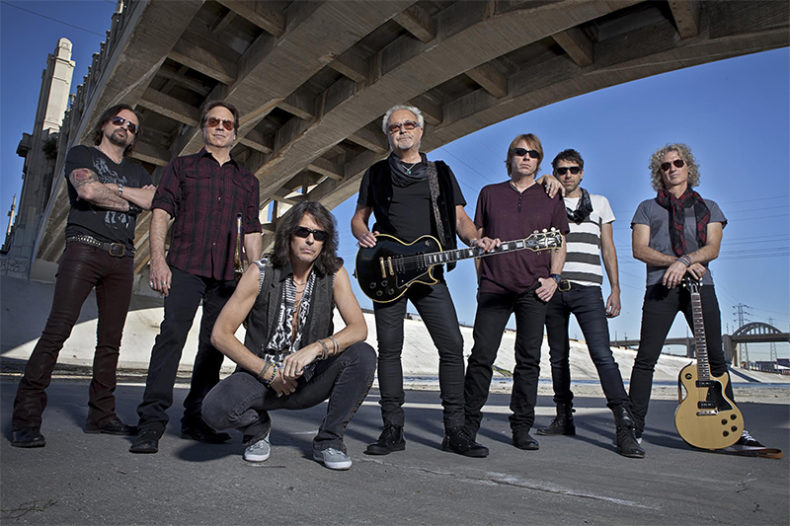 ANOTHER IN A LONG LINE OF JUKE BOX HEROES

A CONVERSATION WITH JEFF PILSON OF FOREIGNER

I was first introduced to Jeff Pilson in the MTV era of the eighties when his band Dokken appeared  regularly on TV, promoting both their Tooth and Nail and Under Lock And Key albums. Although Dokken has been off and on in recent years, Pilson has been a member of the classic rock band Foreigner since 2004. Ahead of a new album release which shows the band  reinventing their classic back catalogue live with an orchestra, I had the opportunity have a brief  chat with the bassist as a prelude to the band’s forthcoming UK tour.

While Pilson is very well known as a rocker, he also has some background with the classical musical genre. Thus, one could assume that the whole experience of recording the live performance with an orchestra was one that he slotted into effortlessly and without any great difficulty. The experience has allowed him to work with some amazing people, and through his own role as producer, it has allowed him to really explore a lot of areas that he ordinarily doesn’t get to musically. He singled out American cellist, pianist and composer Dave Eggar, who has been responsible for all the orchestration, and describes working with him as a “really really wonderful experience”. As a result of their collaboration, Foreigner has now subsequently set up a series of orchestral shows in the United States specifically to promote the new record release. 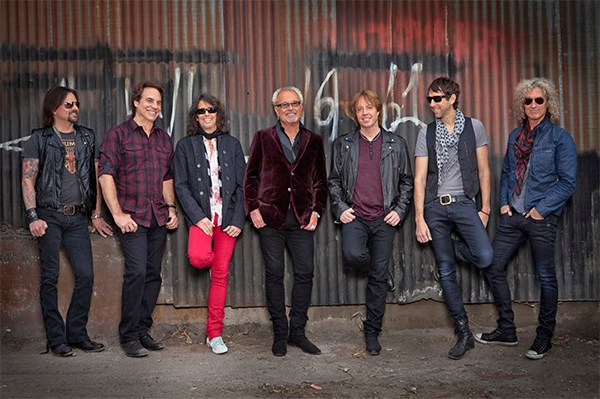 Reflecting on the creative process, Pilson feels that “It was a lot of work”.  “It required a lot of application on the technical side which was very involved. Mick Jones from Foreigner worked closely with Dave Eggar. At the end stage some final tweaking was required. Mick apparently has a pretty good knowledge of classical music even though he was not classically trained.” So, he’d say, “Oh, I really want it to be like Vivaldi on this song or Bartok on this song or Stravinsky on this song.” So, he has a very clear vision of where he wanted to take each song, which made it come together.”Pilson did describe the experience as very rewarding although it did require an element of trial and error.

The past few band releases have been essentially greatest hits albums. By now, fans must be eager for a new studio album from the band. However, Pilson was more optimistic, pointing out that there was a new studio track on the band’s recent 40 album which was released to celebrate their fortieth anniversary. “There was a new ballad on there that Mick wrote with Marty called, “I Give My Life for Love”. The band has also revamped another track that Mick has done for Still Crazy in 2000, but was totally revamped as a Foreigner song. It’s a song called “The Flame Still Burns”. For all intents and purposes, that was a new Foreigner recording on that record. So, there is new music.” Pilson feels that with the current state of the music industry, it is preferable to drip feed new songs to their audience rather than release a complete new album . It’s a different paradigm out there right now and a record takes a long time to put together.” Foreigner also spend much of the year out on tour, which obviously takes up a lot of time in their schedule. 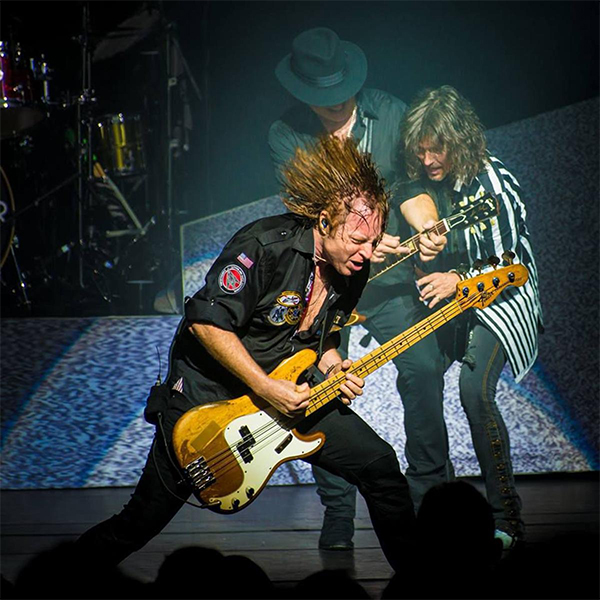 Surely that must present a dilemma for musicians who want to be creating contemporary music.  Pilson concurred as he personally enjoys spending time in the studio, as well  his  band mates enjoy spending time on other musical projects. “I need to do other things for my creative juices”. “The fans are really consistently great, and the fans are what keep it fresh for you.” He concluded that there are certainly worse problems that he could have.

Dokken has had a bit of an on/off career in recent years. They have recently had yet another reunion but that has been confined to just a couple of shows in Japan and a single show in the States back in 2016.The band has recently released a live album and DVD which also includes a brand new Dokken song.  “That turned into being a very fresh and vital thing, which surprised me, but very pleasantly so.”, leaving one to wonder if perhaps there would be yet another chapter to the Dokken saga. However as the individual band members all have their own different musical projects, it is logistically difficult for all parties to commit to anything on a long-term basis. However very cryptically he added “We do get along together now, so that makes it a lot easier.”

“So, I think what you’re going to see from us from now on is a new song here or there, occasionally. But not a whole record. I don’t see that for a while. Ever, really.”

~ Jeff Pilson on the next studio album from Foreigner

Several aspects of the music business have changed significantly since Pilson started as a professional musician. Firstly, there is an  ever increasing popularity of crowd funding campaigns, with both new and veteran bands requesting up front financial contribution for an album release or to fund a tour, with benefits for both parties. “Personally, I see it as an alternative source of funding in an ever-changing business and industry. Musicians have to eat and provide an income for their own bills just like everyone else in society. So, anything that can come up with new creative material, to me, is great. Whatever it takes. It’s fine for me if it’s not immoral or illegal. So, if that’s what it takes, fine. I’m not against it.” He highlighted that it is a different climate these days as people have shorter attention spans than previously. They are after a quick fix. He feels that it is a very unfortunate place to be, especially creatively. Foreigner however cater to a different fan base where there’s still a demand for those individual projects that allow them to be creative and make records. Foreigner as a band still have a budget, and as such they are still in a fortunate position. However, for bands just starting out, it’s completely different and more difficult. When it comes to VIP meet and greets, however, there are many supporters and detractors of this more widespread practice. As for Pilson, he feels that bands no longer have a defined source of income from record sales and the support of record companies. “This is the music business. So, you got to do what you got to do. You can look at it as exploitation or you can look at it as, you know what, here are people that have disposable income. They want to meet the band.” After all we are a commercial society-it’s become a business.

Pilson musical career includes a couple of bands that have endured for over thirty years. He attributes their longevity as being down to quality music and good songs. “I think when you have inspired music with a good musical chemistry and you make an excellent product, you have an excellent quality song, it’s going to stand the test of time. I think both Foreigner and, like I say, to a smaller extent, Dokken, have done that.” 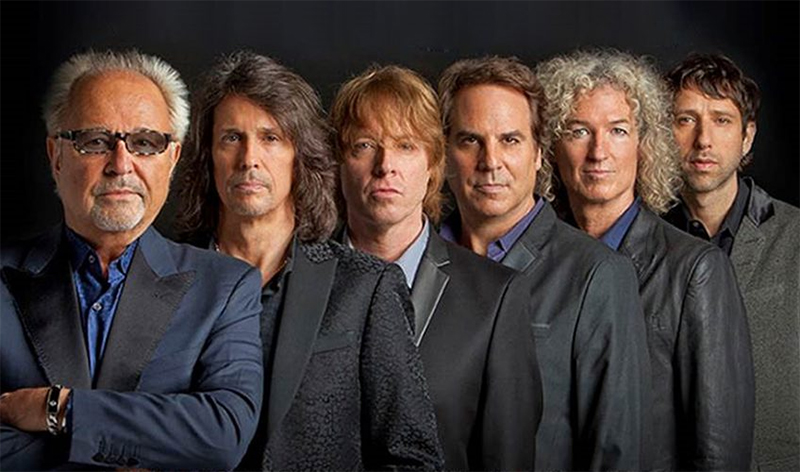 Outside of music the only other career Pilson has ever been interested is was acting. He got to fulfil that dream in 2000 when he appeared in the film Rock Star. He wouldn’t rule out doing some more acting in the future but again he would certainly embrace such opportunities as they came along. Reflecting on his musical career to date, he feels that he could have taken some different paths along the way, but generally his ethos is to stay true to what he really believes in. This however is something that he has only realised as he got older. He still has hopes, dreams and ambitions “I want to write the greatest song of all time. I haven’t done that yet. Writing is very, very important to me and coming up with great music, even though the chances of it selling in the millions is not very present anymore, I still want to make great records and I still want to write the greatest songs I can. So, to me, it’s an ever-progressing thing and that part of me hasn’t changed.”

Apart from Foreigner’s classical album release and subsequent tour dates, he has several other musical projects currently on the go. His roles are varied, playing bass in a new project with Super Stroke, with Robert Mason of Warrant on vocals. He is also currently producing the next Last in Line album, thus preserving his long-standing link to the band Dio.

Pondering on who he would like to personally interview himself if given the opportunity, he reflected for a few minutes before he responded. “If it could be long enough and involved enough, I’d certainly love to sit down with Sir Paul McCartney. But after that, it’s funny. I’ve been on a kick the last several days. I’ve been reading the book about Sam Phillips. There’s a book called The Man Who Invented Rock ‘n’ Roll about Sam Phillips. Of course, he died in 2003. So, I can’t interview him. But what a significant role model. Not only was he so ahead of his time in what he was recording and envisioning, but he was breaking down race barriers.”

Pilson  comes across as being a genuine and humble man. His enjoyment of what he still does is infectious – where many would be content to rest comfortably on their laurels, he continues to be keen to advance and further his own personal musical skills.  I look forward to seeing the classic Foreigner for the first time – indeed it really will “Feel like the First Time”.

I'm a 40 + music fan. Fond mostly of Rock and Metal my staple-musical food delights. Originally from Northern Ireland I am now based in the UK-Manchester. I have a hectic musical existence with regular shows and interviews. Been writing freelance for five years now with several international websites. Passionate about what I do I have been fortunate already to interview many of my all time musical heroes. My music passion was first created by seeing Status Quo at the tender age of 15. While I still am passionate about my Rock and Metal I have found that with age my taste has diversified so that now I am actually dipping into different musical genres and styles for the first time.
RELATED ARTICLES
diodokkendouble vision