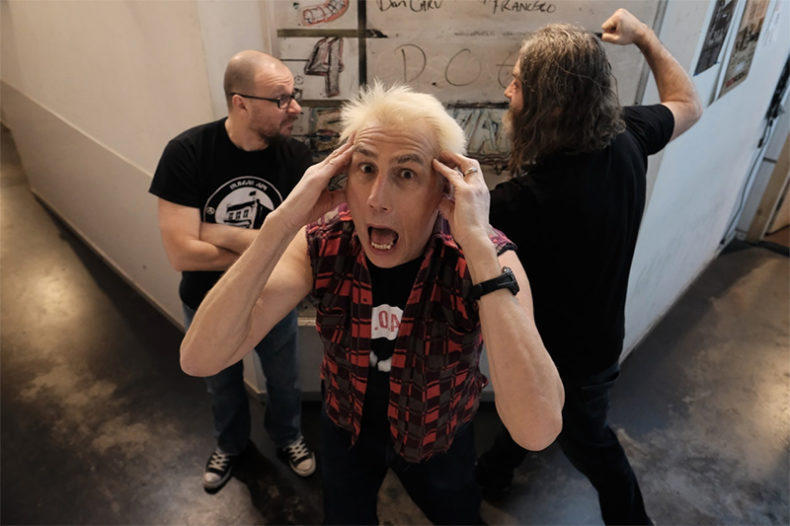 A CONVERSATION WITH JOE KEITHLEY OF D.O.A.

“If you have a situation in your town, then people will fight back, or organize, and maybe get some changes done,” says Joe Keithley of D.O.A., ruminating on forty years of punk rock and activism. “It might get rough along the way. That’s entirely possible, ’cause people with power and money are not very fond of giving it away.”

The more things change, the more they stay the same.

Celebrating their 40th anniversary with a new album (Fight Back), and an extensive North American tour, D.O.A. continues to bring their ragged, high-energy message of social justice to the masses. Keithley co-founded D.O.A. in 1978, in the wake of early influences such as Ramones, The Clash, and the Sex Pistols. They took the genre to the next generation of fans, being among the first bands to earn the tag “hardcore punk”.

Through many albums, years, and personnel changes (Keithley is the only original member), the band has retained their essence. The classic D.O.A. sound comes through on the new album, with guitarist/vocalist Keithley, drummer Paddy Duddy and bassist Mike “Corkscrew” Hodsall. “This has been a really steady-Eddie lineup, with Corkscrew and Paddy. They’re good live, and people really enjoy it. It’s been really easy, but it’ll get harder cause we’re going to start to introduce some of the new songs. We don’t know what we’re going to do from A to Zed, but there are some in-betweens which are mostly me not looking at the setlist, which gets the guys going, ‘What the fuck?!’ Sometimes a kid smashes into your monitor and the setlist goes flying… and then you’re working from memory!” 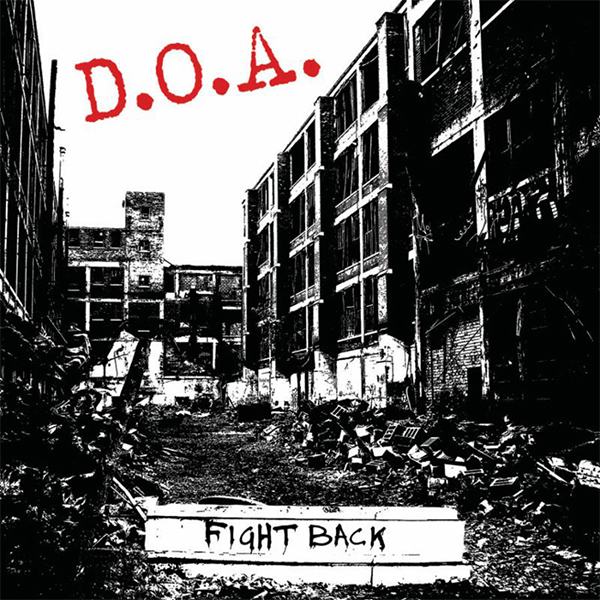 Touring life has changed somewhat since the band’s early days. Keithley recalls a 1984 tour in eastern Europe, when a member of their party gained access to a locked compartment on a train, so the band wouldn’t have to sleep in the aisle. “I think we’d only been there for fifteen minutes, when all of a sudden the train chugged to a halt. This was before the days of the E.U., and we were still on the Yugoslavian side. We were woken up by five cops, all wearing big blue uniforms and big blue hats, that all had big red stars on the hats. The way they woke us up was not by shaking us. They backhanded us across the face, slapped us a couple of times, and yelled at us, ‘Get up, get up! Passports, passports!’… So they grabbed the passports and physically chucked us off the train, onto the siding. So we’re going, “Oh, boy. This is not good!’ And I remember thinking, ‘Boy, I bet a Yugoslavian jail cell is not very comfortable!’ We paid the difference in the fare, and got back on, and went back to our little compartment. A bunch of Italians had taken our seats, so, we were right back out in the aisle. But it looked like the tour was ending in Yugoslavia. Different days, then!”

In this milestone year, Keithley is looking forward to taking D.O.A. on the road to new, younger audiences. “I think punk rock’s alive and well. Everything goes through an ebb and flow…At D.O.A shows, the audience will be like 20-35 year-olds, which is really good. Basically, they’re half my age, or less. The good thing about that is that it’s regenerated the band. We’ve got a fresh new audience that heard that D.O.A is a great live band – they’ve got a bunch of songs and they stand up for this  – or whatever people perceive D.O.A to be. The enthusiasm has been great!” 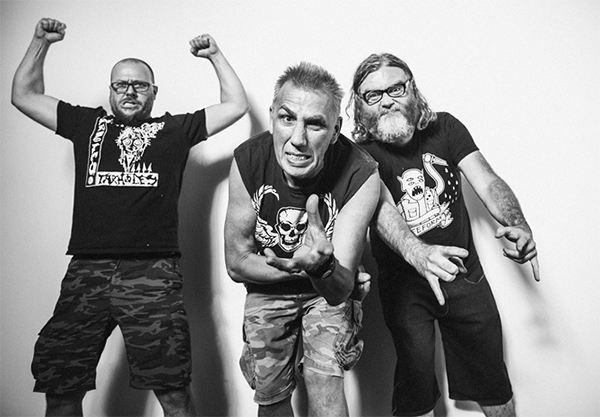 With the release of Fight Back, D.O.A. has turned in one of their strongest efforts since 1982’s War On 45. Politically charged songs, such as “Time To Fight Back” and “Killer Cops” are riff-heavy calls to thought and action. As for the recording process, Keithley notes that things don’t always go according to plan in the studio. “We changed a few things, depending on what we hear… The last song on the album – “The World’s Been Turned Upside Down” – we did that one about ten times and we said, ‘Well, this is a dud.” The drummer, Paddy, was complaining and Mike, the bass player was going, ‘What do you want me to do?’ We started working on it, and we had about three or four rearrangements to make, to try to get the feel – the drums and the bass – and we got that.”

Regarding the album’s lead-off song, “You Need An Ass Kickin’”, Keithley says, “I think I wrote that at my dining room table in about ten minutes. I mean, I didn’t quite finish all the lyrics, but the arrangement stayed exactly the same… We spent about a couple of months on it doing demos, cause those guys live in a different town. So, we probably went at the thing about twenty times before we tried to record it.”

D.O.A.’s motto is “Talk Minus Action Equals Zero”, and this call-to-action-social-justice stance comes through loud and clear on recordings and in live shows. Keithley muses, “I was always a big fan of the Clash – they made three or four great records. That kind of consciousness is what really attracted me to punk rock… I heard The Clash, and these guys were like activists, and I was an activist from the time I was sixteen.”

Forty years on, Keithley still encourages audiences to take action. “Real change starts from yourself, and from your neighbourhood, and from your family and your friends. People are always thinking, ‘I really want to change things.’ Change comes from big government, big media and big business. Those giant entities in our society are kind of poll readers. They’re just reacting to what is popular, or what they think they can get away with, to maintain control, money, and whatever.” 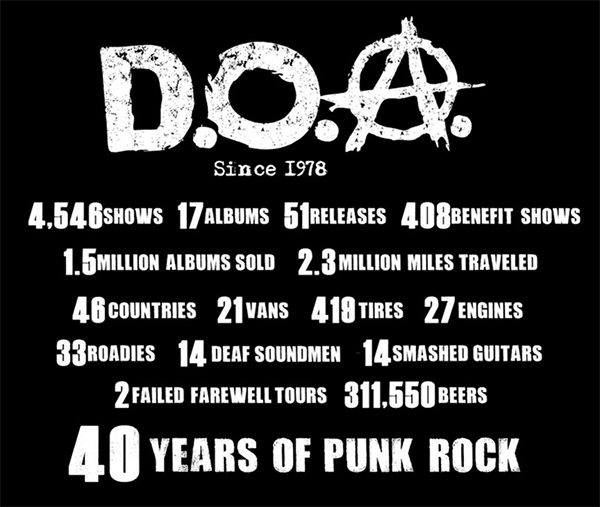 This is a message and attitude that runs deep. Keithley ran for public office provincially in 2015 and 2016, and will be running for mayor of Burnaby, B.C., this fall under the Green Party banner. “I am a recognizable character within my community. People aren’t totally aware, but I was involved in the very first “Rock Against Racism” show in Canada, in 1979. We did environmental benefits for the Styne Valley Forest, which they wanted to cut down – that was seven years before Clayoquot Sound happened. We’ve been at the forefront of these things, and people know that, even if they don’t know the specifics. I employ exactly the same approach (with politics). I’m not on stage, I’m not up there, with a bunch of fans at a club. But it’s the same thing. It’s grassroots democracy. That’s kind of what I’ve been preaching all along, from the stage, from books, from interviews: power to the people – that’s what I’m all about. That’s why I’m running for mayor.

Clearly, Joe Keithley is a man with a plan, for music and for community leadership. Admittedly, his work with D.O.A. has given him a different voice than that of conventional politicians. “Absolutely, it gave me more freedom – I had my own little soapbox with D.O.A., and I was able to speak through records and shows and articles. D.O.A. always says, ‘Talk Minus Action Equals Zero.’ What I really mean by that is: People, try to effect some positive change in your world and your life, and you’ll get paid back, cause other people will do that around you, too… People realize that they’ve got a lot of strength within themselves and especially with their friends – they’re stronger together than when they’re apart.”

D.O.A. will be on tour in the U.S. and Canada this spring and summer, starting in Salt Lake City UT on May 21st.

Bryan Williston has been involved in music since he was a young child. A veteran singer, songwriter, and music educator, Bryan has enjoyed playing a multitude of musical genres in a variety of outfits, over the years. Bryan lives in Whitby, Ontario.
RELATED ARTICLES
D.O.A.donald trumpfeatures