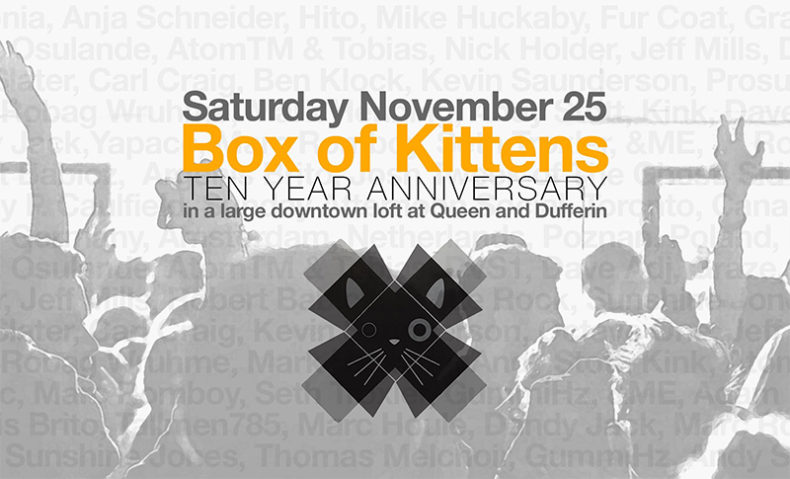 Ten years ago, four techno-loving DJs in Toronto came together “to fill a hole” in the Toronto music scene. The idea was for proper underground music in unique locations, with good sound and good friends who just want to lose themselves in the music. Those DJs were Hali, Jamie Kidd, Mike Gibbs and Fabio Palermo who soon became known as the events company, Box of Kittens (BOK).

What was the reasoning behind a name like that? “We wanted a name that would encourage a different crowd to come and check out some techno, not the usual dressed-in-black chin-strokers,” Gibbs shares. “And it appears to have worked.”

Box of Kittens became synonymous with bringing choice underground techno from abroad to Toronto at all-night sexy, hidden warehouse parties.  After Hali relocated to Berlin around 2011, Box of Kittens expanded internationally to throw parties across Europe, North America and Thailand. They continue to partner with other like-minded promoters and DJs to produce excellent underground music events, including the popular Sunday Social (in partnership with Alien InFlux), which launched its first boat cruise this past summer after a successful run of sold out steamy Sunday afternoon gatherings.

Talia Wooldridge is an avid music lover, composer and ethnomusicologist who contributes artist interviews, live concerts, festivals and album reviews for Spill Magazine. She has written extensively on the intersection of music, personal identity and cultural symbolism with an early focus on Latin American Hip Hop and female Cuban rappers. In her spare time, Talia writes, composes music and manages Music Can Heal, a non-profit that brings live, award-winning musicians to inspire healing in hospitals, hospices and communities in need. Her next project is an interactive music-travelogue exploring music cultures and music travel around the globe. Follow her here: www.taliawooldridge.com + www.movetoyourownbeat.com.
RELATED ARTICLES
eventstoronto