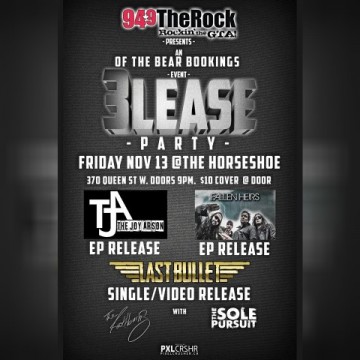 SPILL EVENTS: 3LEASE – THE JOY ARSON / LASTBULLET / FALLEN HEIRS WITH THE RATHBURNS AND THE SOLE PURSUIT

Presented By Of The Bear Bookings and 94.9 The Rock FM

This is one night you don’t want to miss! Of The Bear Bookings and 94.9 The Rock FM presents to you a triple release party! November 13th is going to be a special night!

The Joy Arson will be releasing their brand new album, Where It Ends, which will be the second EP for the band. In case you haven’t heard it yet, the first single from the album, “Way Too Long”,  has been premiering here at Spill Magazine.

Last Bullet will be releasing a brand new single and video, “Sin”. It is the first in a series of singles the band is set to release in the next little while.

And lastly, Fallen Heirs will be releasing their highly anticipated 5 song EP Eyes Wide Open. This will be the second EP release from the band.

Starting off the evening will be sets by Toronto rockers The Rathburns, and The Sole Pursuit.

This is one of the best musical lineups Toronto has seen in a long time — you don’t want to miss it. See you there!

The Spill Magazine is a Toronto-based online publication dedicated to covering the independent music scene with a strong focus on our thriving hometown talent. Our writers bring you up-to-date news, in-depth features on musicians and reviews for the latest CD releases. We also travel to the front lines for all local festivals including Canadian Music Week and North by Northeast. Don’t forget to check out our Facebook and Twitter pages for all daily Spill updates.
RELATED ARTICLES
eventsfallen heirslast bullet