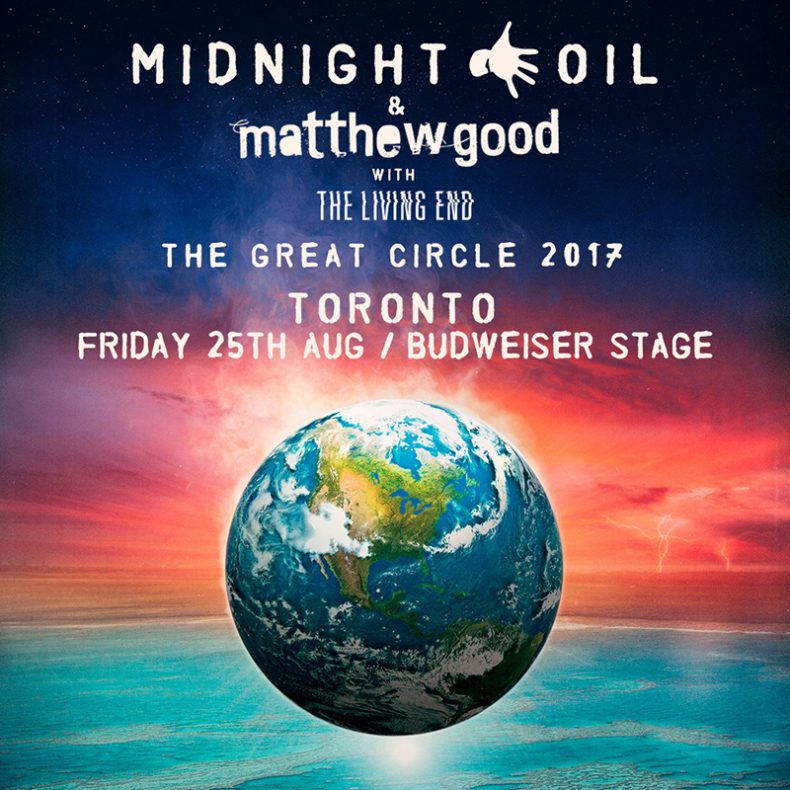 ENTER FOR YOUR CHANCE TO WIN A PAIR OF TICKETS TO SEE MIDNIGHT OIL w/ MATTHEW GOOD AT BUDWEISER STAGE ON AUGUST 25!

SUBSCRIBE TO THE OFFICIAL SPILL MAGAZINE NEWSLETTER BELOW FOR A CHANCE TO WIN 2 MIDNIGHT OIL CONCERT TICKETS – COURTESY OF SPILL MAGAZINE!

Midnight Oil are more than just a rock ‘n’ roll band. From the northern beaches of Sydney to the streets of Manhattan, they have stopped traffic, inflamed passions, inspired fans, challenged the concepts of “business as usual” and broken new ground.

Seeing Midnight Oil in full flight is to experience the transcendent, kinetic power of live rock ‘n’ roll.  They leave you inspired to live life more passionately and to Get Involved.

Everything about the band is uncompromising, but their greatest achievement is that they are, night after night and album after album, a great rock ‘n’ roll band. For all of the incredible growth, ambition and experimentation that Midnight Oil have evidenced, the sound and the fury and the spirit of their earliest recordings are still there 40 years later, on tracks like “White Skin Black Heart” and “Say Your Prayers”.

Rob Hirst (drums, vocals) and Jim Moginie (guitars, keys & vocals) started making music together at school in 1972. They gradually evolved into Midnight Oil, with singer Peter Garrett joining in 1975 and Martin Rotsey (guitar), coming on board in the following year. Founding bass player, Andrew “Bear” James, was replaced by Peter “Giffo” Gifford from 1979 until 1987 when Bones Hillman joined the band.

Before they took it global, Midnight Oil’s early spiritual home was the Royal Antler Hotel, Narrabeen on Sydney’s northern beaches. It was there that ‘the Oils’ fan base swelled from a handful to a thousand – in a space intended for half that number. Between 1976 and the very early 80’s, these five young men played out this blistering ritual almost 1000 times. At all of these shows the distance and the difference between audience and band was indistinguishable. From their earliest days, Midnight Oil was writing songs about who and what they saw around them.

The eponymous debut album, smartly nicknamed “The Blue Meanie” (equal parts a reference to the Beatles and the snarl of the sound), was released in 1978 and was a collection of primal, spiky rock ‘n’ roll. Like so many great debut albums it spoke directly about the milieu in which they were born (Sydney surf/suburbs culture) and was an in-studio approximation of their live set. The song “Run By Night” became an instant classic and despite receiving next to no commercial radio support, the album cracked the Australian Top 50. Midnight Oil was on its way.

A second album, “Head Injuries”, followed the next year featuring the singles “Cold Cold Change” and “Back on the Borderline” – the geography was a little broader, the subject matter a little more universal and the sound a little closer to their live energy.

Shortly after Head Injuries Andrew “Bear” James retired and the bass was picked up by Peter “Giffo” Gifford. Recalibrating their sound as they would do many times, the band’s new line-up released the 12″ “Bird Noises” EP (featuring “No Time For Games” and the sublime surf instrumental “Wedding Cake Island”).

Their ambitions growing, the band decamped to England to record the “Place Without A Postcard” album with legendary producer Glyn Johns (The Faces, The Who, The Rolling Stones). A dense, claustrophobic gem, “Place Without A Postcard” is arguably Midnight Oil’s first great album – defiantly articulating a broader Australian world view on tracks like “Armistice Day”, “Don’t Wanna Be The One” and the epic “Lucky Country”.

By the time “Place Without A Postcard” was released in 1981, the Australian pub rock scene was at its zenith. Suburban beer barns held 2,000 punters and the Oils were filling them nightly, creating rock ‘n’ roll chaos. Being an Oils fan wasn’t a part-time or passive experience. 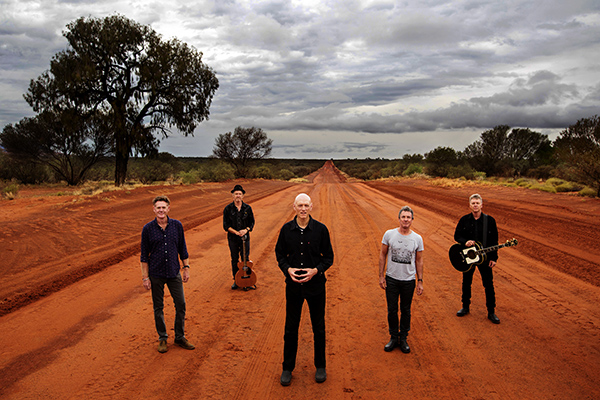 Throughout the band wrote their own rules; refusing to appear on popular TV shows like Countdown and shunning all the ‘music biz’ norms. At the same time, Midnight Oil was becoming known for their support of environmental and social justice causes. The singular trail that they blazed set the tone for everything that followed.

In 1982, their fourth album “10, 9, 8, 7, 6, 5, 4, 3, 2, 1” turned everything on its head. Recorded as the band lived on the breadline in London in the shadow of the nuclear arms race and produced by an enthusiastic, irreverent 21 year old Nick Launay, (PIL, Gang of 4), 10-1 is rock ‘n’ roll paranoia at its finest. They deconstructed their sound and reassembled it into complex agitrock anthems like “Power And The Passion” where drums play against drum machines while thick warm waves of acoustic guitar lay a bed for the immensely unsettling “US Forces”. The lyrics captured a band who would not be boxed in by geography, precedent, corporations, government or the expectations of anyone. As Midnight Oil expanded their creative ambitions they also expanded their audience. The album was a monster success in Australia, staying in the Australians charts in excess of 200 weeks. It was also popular on US college radio and across pockets of Europe – as the band expanded its ambitions it also expanded its reach.

“Red Sails in the Sunset” came next. Recorded in Japan it took sonic experimentation and polemics to new and extreme levels. It was released in 1983 against the backdrop of singer Peter Garrett making a run for the Australian Senate on a Nuclear Disarmament platform. While Garrett focused on ‘real’ politics, Red Sails saw drummer Rob Hirst coming to the fore, assuming lead vocal duties on “When The Generals Talk” and “Kosciusko”.

In 1985, Midnight Oil performed an unforgettable live set on Sydney’s Me-mel (Goat Island) to celebrate the 10th birthday of music station 2JJ before reacting to the experimental extremes of their two previous albums with the fierce, streamlined EP “Species Deceases”, featuring enduring fan favourites like “Hercules” and “Progress” this was a reset that suggested a new beginning.

That new beginning happened in 1986 when Midnight Oil was invited to tour through some of Australia’s most remote communities with legendary Aboriginal group, the Warumpi Band. The ‘Blackfella/Whitefella’ tour was a transformative experience that exposed the band to the austere beauty of the desert landscape, the inspiring creativity of the indigenous people and the deplorable conditions in which so many of those people existed.

The band returned to Sydney and began work on their global breakthrough “Diesel and Dust”. The singles lifted from that album like “The Dead Heart”, “Put Down That Weapon”, “Dreamworld” and, of course, “Beds Are Burning” brought Midnight Oil to new audiences around the globe. The band toured internationally through ‘87 and ’88 driving the album to huge critical and commercial success. It ultimately sold more than 6 million copies and earned them a Grammy nomination although the band declined to attend the ceremony in order to be part of a political event at home.

Among numerous other honours, “Beds Are Burning” is included in the U.S. Rock ’n’ Roll Hall of Fame as one of the “500 Songs That Shaped Rock ’n’ Roll”. “Diesel & Dust” was recently listed at #1 in the definitive book “100 Best Australian Albums”.

1990’s “Blue Sky Mining” saw tracks like “One Country,” “Blue Sky Mine,” and “Forgotten Years” bring an international orientation to the band’s song writing without losing any of their characteristically Australian voice.  While touring the US after the album’s release, the band drew attention to the environmental disaster caused by an Exxon oil tanker that ran aground in Alaska. They hired a flatbed truck and played a blistering guerrilla set outside the Exxon offices in New York, stopping traffic and putting the issue on front pages worldwide. “Blue Sky Mining” was another globally successful album, charting top 5 in many parts of Europe and top 20 in the U.S.. Back home it won the band five ARIA Awards and was certified five times platinum.

Midnight Oil’s creative evolution continued with 1993’s “Earth and Sun and Moon” with its emphasis on melody, textures and storytelling. They toured the world on the WOMAD festival and were one of the first international artists to play in South Africa after Nelson Mandela came to power. These new experiences influenced 1996’s atmospheric album, “Breathe” which they recorded in Sydney and New Orleans. Then, in typically perverse fashion, the band veered away from these warm, dark, ambient textures to create arguably their most angry and confronting release – 1998’s “Redneck Wonderland”. In Australia, anti-migrant and anti-Aboriginal sentiment was being inflamed for political gain and Midnight Oil’s visceral response pulled no punches.

In 2000 the band performed to an audience of over a billion people at the closing ceremony of the Sydney Olympic Games revealing clothing emblazoned with the word, ‘SORRY’; thereby provoking global discussion about the apology due to stolen generations of Aboriginal children forcibly removed from their families between the 1890’s and 1970’s. That year they also recorded the excellent “Say Your Prayers”, an anthem for the East Timorese, which appeared on a benefit release and was stripped onto their 11th and final studio album, “Capricornia”. Aptly enough, this swag of songs drew heavily from their deep affection and appreciation of their Australian homeland.

In December 2002 Peter Garrett left the band to pursue a full time political career. He was elected in 2004 as a federal Member of Parliament where he would eventually serve as a cabinet Minister in various portfolios including School Education and Environment. Nonetheless in 2005 the Oils regrouped to headline the “Waveaid” tsunami benefit concert for over 50,000 people at the Sydney Cricket Ground. In 2009 the band topped a massive bill at “Sound Relief” at the Melbourne Cricket Ground where over 80,000 fans joined them in raising millions of dollars for victims of Australian fires and floods. Apart from these two iconic stadium appearances for charity (and a handful of intimate ‘warmup’ gigs immediately prior to each of them) the members played together in The Break and separately in other bands for over a decade. Then in May 2016 they made headlines with a surprise announcement via Facebook that they would be “getting back together for some gigs next year“.

On February 17, 2017 (Australian time) the band held a press conference on Sydney Harbour at which they announced that they would be touring the world from April through November of this year. The tour will be accompanied by the release of three new box sets; one will contain all their existing LP’s and EP’s, another will contain all their existing CD’s and videos plus there will be a new 4 CD/8DVD treasure trove of previously unreleased and rare material called “The Overflow Tank”.

As the tour name implies, “The Great Circle” will begin with an April pub gig in Sydney and then loop around Brazil, North America, Europe and New Zealand before climaxing with a lap of Australia. These circles of both the globe and their homeland will close with one more Sydney show on Remembrance Day.

Of course “The Great Circle” will see the band drawing attention to issues affecting the planet, including collaborating with Greenpeace on crucial issues like dangerous climate change.

The tour name also has a further meaning. Sailors and airmen use “the great circle” to navigate across oceans because the planet’s curvature means the shortest distance between two points is not usually a straight line. It’s appropriate for this band who have always been deeply engaged with the world around them but whose career path has never been obvious or linear.

Midnight Oil is still more than just a rock ’n’ roll band and in 2017 they will bring things back to where they all began. The circle remains unbroken.

SPILL NEWS strives to keep our readers up to date with news and events in the music industry. We keep you informed of the most recent information regarding new releases, tour dates, and information items about your favourite artists.
RELATED ARTICLES
budweiser stagecontestmatthew good