SPILL CONTEST – WIN 1 OF 5 PASSES TO SEE RUSTY NOVEMBER 10 AT THE MOD CLUB THEATRE AS PART OF INDIE WEEK TORONTO 2017!

Contests
91
previous article
SPILL FEATURE: THE WARMTH OF THE SUN AND A LITTLE COMPASSION - A CONVERSATION WITH ANDY MAIZE OF THE SKYDIGGERS
next article
SPILL CONTEST - WIN 1 OF 2 ALL-ACCESS WRISTBANDS TO INDIE WEEK TORONTO 2017! 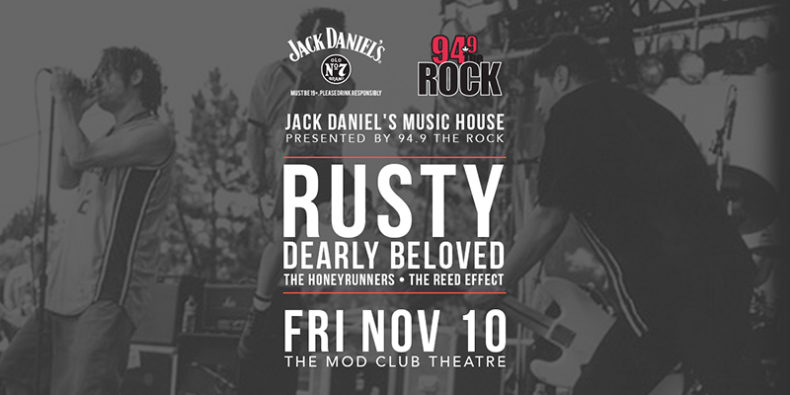 ENTER FOR YOUR CHANCE TO WIN 1 OF 5 PASSES TO SEE RUSTY NOVEMBER 10 AT THE MOD CLUB THEATRE AS PART OF INDIE WEEK TORONTO 2017!

Rusty’s origins are in One Free Fall, a band from Wolfville, Nova Scotia who moved to Toronto in 1988. That band’s core members were vocalist Ken MacNeil, guitarist Sandy Graham, bassist Jim Moore and drummer Bob Vespaziani. That band signed to independent label Handsome Boy Records, released the album Mud Creek in 1993 and collaborated with Art Bergmann on a cover of “Prisoners of Rock ‘n Roll” for the Neil Young tribute album Borrowed Tunes: A Tribute to Neil Young, but broke up in 1994 before achieving any notable success.

Following their breakup, MacNeil, Moore and Vespaziani hooked up with former Doughboys member Scott McCullough to form Rusty, and recorded the EP Wake Me in 1994. A video for the song “Wake Me” would become a minor hit on MuchMusic. Released on Handsome Boy Records, the EP was popular on Canadian campus radio, and led to a major label distribution deal with BMG Records for their full-length album Fluke in 1995. Vespaziani left the group and was replaced by Mitch Perkins.

Led by the hit single “Misogyny”, which featured a video consisting of clips from Canadian filmmaker Bruce LaBruce’s film Hustler White as well as Canadian singer Danko Jones, Fluke was the band’s commercial breakthrough, also spawning the single “California”, and earning a Juno Award nomination for Best Alternative Album. The album was produced by Chris Wardman, who also played guitar on the tracks “Groovy Dead” and “California”.

In 1996, the band contributed a cover of “Let’s Break Robert Out of Jail” to the compilation album A Tribute to Hard Core Logo. Also in 1996 the song “Punk” was included on soundtrack to Chris Farley’s movie Black Sheep.

The band’s follow-up album, Sophomoric, was released in 1997, including the singles “Empty Cell” and “Oh No Joe”. Perkins left the band that year and was replaced by John Lalley. Perkins left the group due to creative differences and released an electronic album independently with Andrew Massey under the name “Blu Pernu”.

In 1998, Rusty released Out of Their Heads. The band broke up two years later, playing their final show on November 25, 2000.

SPILL NEWS strives to keep our readers up to date with news and events in the music industry. We keep you informed of the most recent information regarding new releases, tour dates, and information items about your favourite artists.
RELATED ARTICLES
contestrustythe mod club theatre

by SPILL NEWS on February 27, 2019
CONTEST CLOSED   ENTER FOR YOUR CHANCE TO WIN A PAIR OF TICKETS TO SEE WITHIN TEMPTATION AT REBEL, TORONTO ON MARCH [...]