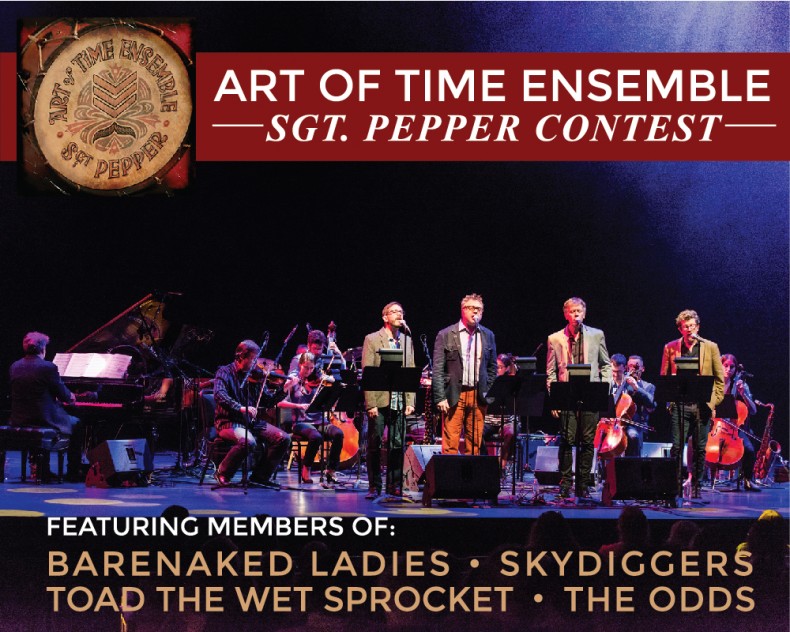 for your chance to win a pair of tickets to see
Andy Maize (Skydiggers), Craig Northey (The Odds), Glen Phillips (Toad The Wet Sprocket) and Steven Page (formerly of Barenaked Ladies) perform in

WITH THE KITCHENER-WATERLOO SYMPHONY:

Led by renowned pianist and artistic director Andrew Burashko, and joined by the Kitchener-Waterloo Symphony and a stellar line up of singers from the Canadian indie-rock world, Art of Time will celebrate The Beatles’ genre-defying album in one of the most inventive collaborations of the year. Taking up the album’s iconic vocal leads are Andy Maize (Skydiggers), Craig Northey (The Odds), Glen Phillips (Toad and the Wet Sprocket) and Steven Page (formerly of Barenaked Ladies).

One part tone poem, one part rock opera, Sgt. Pepper has flavoured nearly half a century of popular music and yet remains as fresh sounding as it did upon initial release.  Lucy in the Sky with Diamonds, When I’m Sixty-Four, and With a Little Help From My Friends are but a few of Sgt. Pepper’s hits that have become a permanent part of popular culture, earning its designation by Rolling Stone as “the most important rock and roll album ever made”.

ABOUT ART OF TIME:

Led by internationally renowned concert pianist Andrew Burashko, Toronto’s Art of Time Ensemble has, for over a decade, redefined the classical music experience.  Fusing high art and popular culture in programs that juxtapose the best of each genre, Art of Time entertains as it enlightens, revealing the universal qualities that lie at the heart of all great music.

SPILL NEWS strives to keep our readers up to date with news and events in the music industry. We keep you informed of the most recent information regarding new releases, tour dates, and information items about your favourite artists.
RELATED ARTICLES
andy maizebarenaked ladiescontest

by Aaron Badgley on October 23, 2017
THE WARMTH OF THE SUN AND A LITTLE COMPASSION A CONVERSATION WITH ANDY MAIZE OF THE SKYDIGGERS Skydiggers have been around since the 1980s. It may be hard [...]