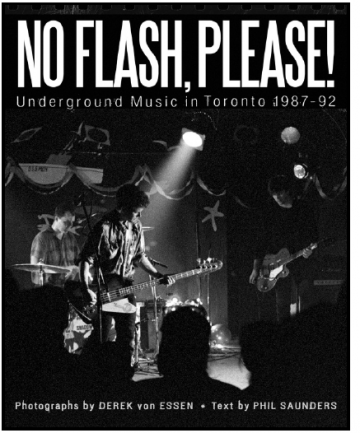 The music scene in the mid-eighties was in transition, just as the entire music business was, unaware that it was all about to change in 1991 when Nirvana’s watershed release, Nevermind would unexpectedly hit number one on the Billboard chart. But that explosion didn’t happen over night. It was the product of years of music scenes like Toronto’s developing, clubs seeking original music and communities of musicians, artists and fans supporting them.

No Flash, Please! documents an important period in Toronto’s music community. As seen and heard by two journalists covering it for a number of monthly independent magazines, not only did they experience the local bands they knew and loved becoming famous, they also witnessed soon-to-be legends, come through those same clubs and concert halls. Nirvana, Sonic Youth, Jesus Lizard, Mudhoney, Soundgarden, Red Hot Chili Peppers, Henry Rollins, all played Toronto during this period and von Essen’s camera and Saunders’ ears were there to witness their performances in crowds that varied in size from 20 to 500. No Flash, Please! doesn’t just focus on the music, it also captures the crowds and the community that spawned one of the richest periods in Toronto’s music history.

Pre-Order Only Via Anvil Press: