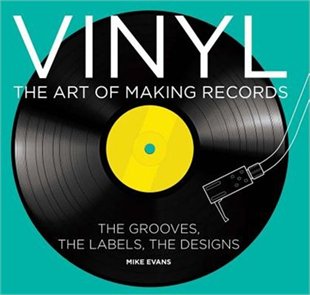 In our increasingly digital world, audiophiles know that the real recording is on vinyl. That’s why sales of vinyl continue to soar. Mike Evans offers a sumptuous visual celebration of this medium’s fascinating history and triumphant rebirth. From weighty 78s to feisty 45s, from eccentric EPs to legendary LPs, he brings vinyl recordings off the shelves and out of the crates, spotlighting:

No collection is complete without it.

Mike Evans is the author of The Art of the Beatles (Frederick Muller), The Art of British Rock (Frances Lincoln), Bowie Treasures (Carlton), Elvis: A Celebration (Dorling Kindersley), Woodstock: Three Days that Rocked the World (Sterling), and numerous other titles. A graduate of the Cavern Club with two singles on Decca under his belt, Evans played in The Liverpool Scene, supporting both Led Zeppelin and Bob Dylan in 1969. He subsequently moved into radio and writing for Sounds, Melody Maker, and the Guardian. Since the late 1980s, Mike has written or edited over 60 books on music, movies, and fashion. He lives in France.

The Spill Magazine is a Toronto-based online publication dedicated to covering the independent music scene with a strong focus on our thriving hometown talent. Our writers bring you up-to-date news, in-depth features on musicians and reviews for the latest CD releases. We also travel to the front lines for all local festivals including Canadian Music Week and North by Northeast. Don’t forget to check out our Facebook and Twitter pages for all daily Spill updates.
RELATED ARTICLES
booksmusic