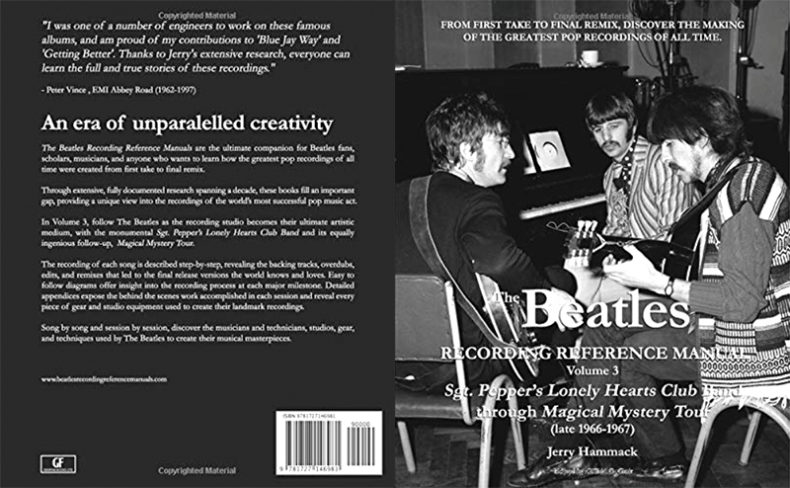 Hammack is back with his third volume in this series in which he documents all aspects of The Beatles recording from a specific time period. For Volume Three, as noted in the title, he looks at late 1966 until the middle of 1967. Here he picks up where he left off with Volume Two and Revolver. For this book he documents the psychedelic era for The Beatles.

Hammack is remarkably detailed oriented. He has completed extensive research and as a musician/producer himself, adds his own insight into the available information.This adds a level of depth to his research and his findings. Everything you could ever want to know can be found in this book. He documents the instruments The Beatles play, how they put the material together and then he is able to analyze the final product. And even though he is obviously a fan, he presents the material in a very objective manner.

Although most of the material in this book is found in various other Beatle texts, what makes this book essential is that he brings together material from many different sources and is able to compile all of the information into one handy collection. Basically Hammack takes the reader from the original demo by the writer to the final Beatles version. He also denotes stereo and mono mixes and is able to present this information in a readable fashion. And in doing so, the fan learns a great deal. For example, the amount of time spent on the the mono mix for Sgt. Pepper compared to the stereo mix. Very enlightening, and answers the question as to why the mono version sounds better.

Fans will pour over this book, and it is an excellent reference guide to some of the best and most important music ever created. This volume is every bit as detailed and informative as the previous two.  Hammack is thorough and writes a very readable book.

Born and raised in Whitby, Aaron discovered music through his love of The Beatles. This led to a career in radio, writing for various publications, and ultimately a radio show about The Beatles (Beatles Universe), which ran for over four years. When not immersed in music, Aaron enjoys spending time with the loves of his life -- his wife Andrea, and daughters Emily and Linda (all of whom have an intense love of music too).
RELATED ARTICLES
bookscreatespace independent publishing platformjerry hammack