SPILL BOOKS: ANTHONY HOGAN – FROM A STORM TO A HURRICANE: RORY STORM AND THE HURRICANES 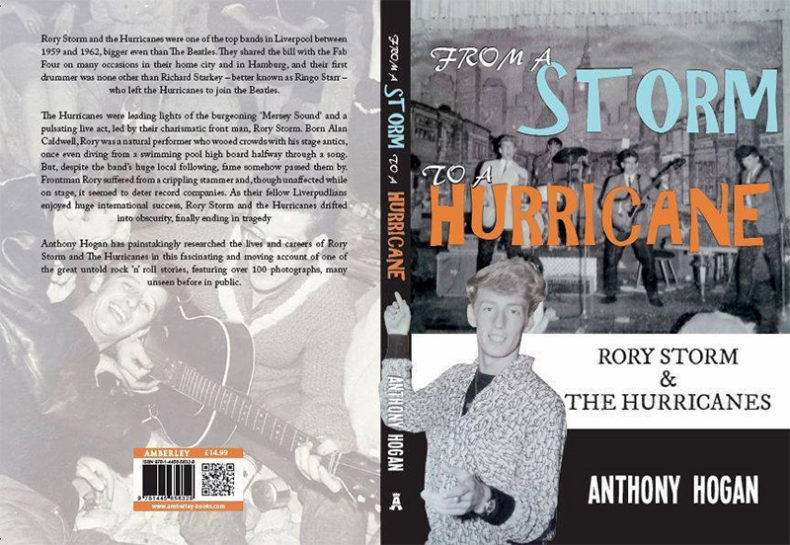 Anthony Hogan – From A Storm To A Hurricane: Rory Storm And The Hurricanes

Anthony Hogan is an exceptional writer, who has found many areas of The Beatles and Liverpool that other authors have not spent the time researching or exploring. In this case he has written a book about a singer who is famous because of his drummer.

Rory Storm (whose real name was Alan Caldwell) had a band called the Hurricanes, and for a long while the drummer of the band was Ringo Starr. In fact, Ringo left The Hurricanes to join The Beatles when they fired Peter Best. This is a well known fact. Ringo has even written a song about it on his 2015 album,  Postcards From Paradise (the song “Rory and The Hurricanes is a lovely tribute to this great artist).

But Hogan goes much further into this subject. Storm was a huge star in pre-Beatles Liverpool. He had a commanding performance and was pulling in big crowds long before The Beatles. Hogan has done some excellent research into this and paints a picture of an artist that had natural talent, as well as a pronounced stammer when he spoke. But he also paints a picture of an artist, for several reasons, never got his due.

The main problem for Storm was the material issued on record once the lid was blown off Liverpool. Once The Beatles made it worldwide, there were a number of Liverpool bands and artists who were signed and went on to huge success ( Gerry and The Pacemakers, Billy J. Kramer and the Dakotas, Cilla Black), but Storm could not replicate his success outside of Liverpool.

Again, it could be a case of the material issued on record was not indicative of his stage show. His second single, issued on Parlophone (the label The Beatles recorded for in the U.K.) was produced by Brian Epstein and featured Ringo on backing vocals and hand claps. But the song, “America” was not what local fans expected from Storm. The single sunk without a trace.

SInce then his music has been issued (most notably Live at The Jive Hive, 1960 assembled by his sister Iris Caldwell in 2012 and well worth searching out), and it is clear this band could rock. Here again, Hogan goes into great detail about Storm’s shows by talking to people who were there and resourcing information from the time. In Hogan’s hands the material comes to life and not only do you get a sense about Rory Storm and The Hurricanes, you as the reader start to pull for the guy, hoping he will achieve the success he deserved. But we all know he did not and his fate is sadder beyond words.

Hogan is an incredible writer. He has thoroughly researched the band and is able to put everything in context, including their influence on The Beatles and the Liverpool scene. This is essential reading about an artist that is more famous for his drummer than his own accomplishments. Hogan sets the record straight and does so in a very readable and enjoyable book.

Purchase From A Storm To A Hurricane Via

Born and raised in Whitby, Aaron discovered music through his love of The Beatles. This led to a career in radio, writing for various publications, and ultimately a radio show about The Beatles (Beatles Universe), which ran for over four years. When not immersed in music, Aaron enjoys spending time with the loves of his life -- his wife Andrea, and daughters Emily and Linda (all of whom have an intense love of music too).
RELATED ARTICLES
booksringo starrthe beatles