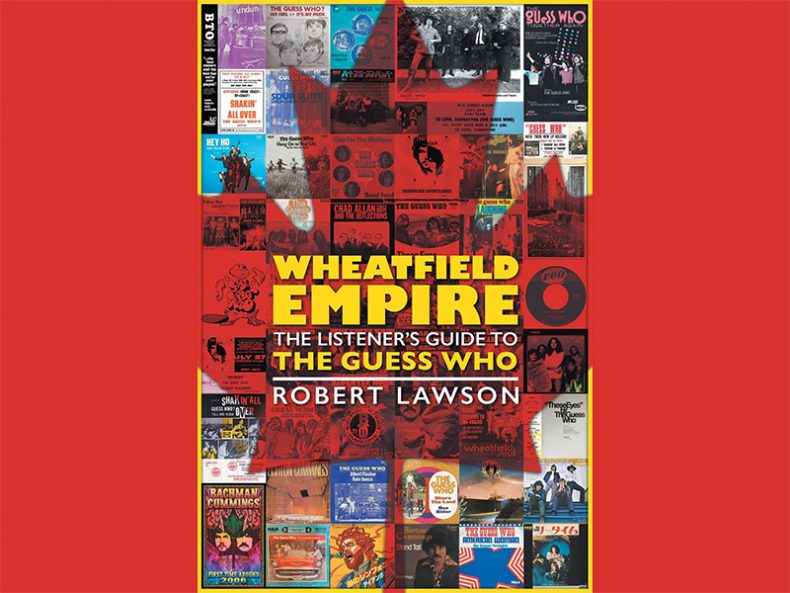 ROBERT LAWSON – WHEATFIELD EMPIRE: THE LISTENER’S GUIDE TO THE GUESS WHO

“If you love The Guess Who, as I do, you will love this book.” So writes author and Rheostatics member Dave Bidini, in the introduction to Robert Lawson’s Wheatfield Empire: The Listener’s Guide To The Guess Who. Bidini’s comment is pretty much bang-on. Part reference book, part chronology, part oral history, Wheatfield Empire is mandatory reading for die-hard Guess Who fans and casual listeners alike. Following on the heels of his earlier “listener’s guide” volumes on the careers of Nazareth and Cheap trick, Lawson dives deep into the world of the iconic band from Winnipeg.

In this exhaustive and authoritative work, Lawson takes the reader back to the late 1950s and early ’60s incarnations of the band (originally fronted by Chad Allan), through the Bachman-Cummings era, and beyond. With each chapter dedicated to a different Guess Who album in order of release, Lawson discusses band personalities and politics, personnel changes, songwriting and production, and significant concert and television appearances. This album-by-album presentation is a winning format, as the story of the band’s development unfolds.

Within each chapter, Lawson provides background to each album, an overview of the recording, its release and reception, as well as information about reissues, remasters and rerecordings. These subject areas are augmented by quotes from band members, producers and engineers, and other ancillary associates.

As a whole, Wheatfield Empire pulls the story of the Guess Who together, and ties it up nicely. Lawson has given us thorough research in a very readable, almost conversational format, and the quotes give historical and artistic context. While perhaps not definitive, this book goes a long way to laying out the facts, and dispelling some stories and rumours which have persisted over the years. For example, it is interesting to read band members’ individual accounts of the jam that inspired the song “American Woman”, and how they differ.

There is a lot of information in Wheatfield Empire, and the format of each chapter, while consistent, does border on being repetitive. But while is it formulaic, the formula works. This is a minor criticism though. This is a well-conceived and executed book, and is worth checking out.

Purchase Wheatfield Empire: The Listener’S Guide To The Guess Who Via

Bryan Williston has been involved in music since he was a young child. A veteran singer, songwriter, and music educator, Bryan has enjoyed playing a multitude of musical genres in a variety of outfits, over the years. Bryan lives in Whitby, Ontario.
RELATED ARTICLES
booksdave bidinirheostatics