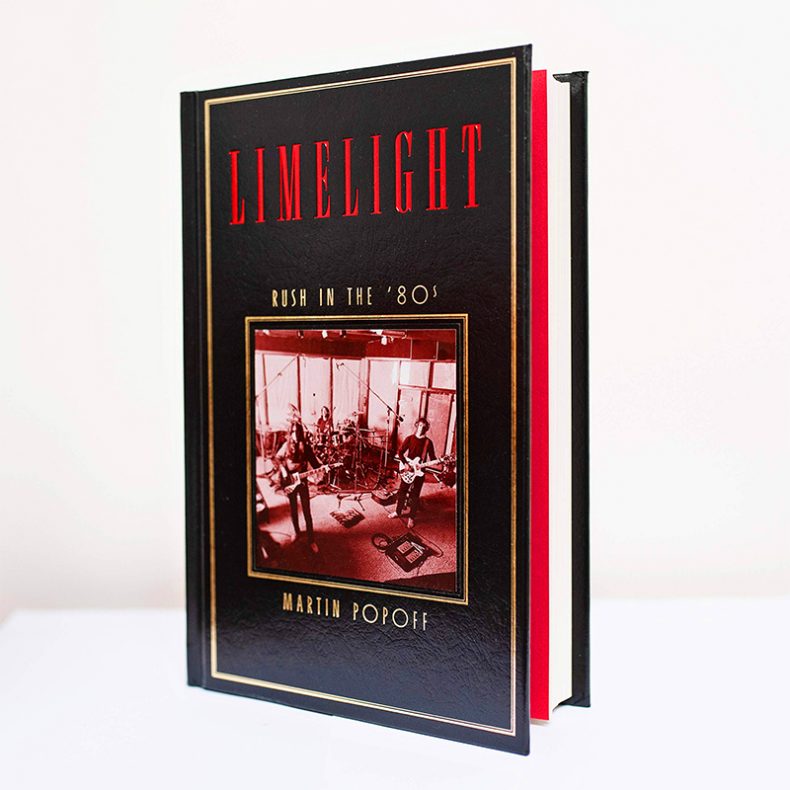 Author Martin Popoff continues his deep dive into the discography of Rush with Limelight: Rush In The ‘80s, the second book in his trilogy on the band, following the release of Anthem: Rush In The ‘70s earlier this year. Focusing on Rush’s creative output in the ‘80s, Popoff dedicates thoroughly written chapters to examining Permanent Waves, Moving Pictures, Signals, Grace Under Pressure, Power Windows, Hold Your Fire, and Presto, along with live albums Exit… Stage Left and A Show Of Hands. Popoff tackles Rush’s busiest, and, debatably, their most successful and creatively charged decade with a sense of expertise and a collection of well-researched interviews from various sources, as well as the many he has conducted over the years.

Opening with a brief introduction memorializing the late Neil Peart, who passed away as Anthem: Rush In The ‘70s was being printed, Limelight: Rush In The ‘80s opens with a solemn tone. While Rush had officially retired following their 2018 tour, there is now a tragic sense of finality surrounding the band. With that in mind, Limelight is a fantastic reminder of the brilliance of both the performance and songwriting Rush were known for and, furthermore, the iconic and innovative contributions Peart made to drumming as a whole. Divided into chapters for each record, Popoff presses forward into Permanent Waves, an era in which Rush was still growing. Truly, the start of the ‘80s seemed to bring a sense of make or break with steady progress being made throughout the previous decade that yielded little returns. Popoff demonstrates this while further exploring the creative directions taken at the time through an abundance of firsthand accounts seamlessly tied together.

Within the chapters of Moving Pictures – nearly unanimously considered to be Rush’s greatest album which broke them into the upper echelons of rock – and the follow-up, Signals, Popoff excellently paints a picture of massive success and contrasting creative struggles and growing pains as Rush find their place in the ever-changing sonic landscape of the 1980s, while getting used to their own shift as the progressive underdogs who had seemingly made it big. Throughout Limelight, Popoff continues to make comparisons between the album of the current chapter with different albums, struggles, and successes from previous chapters to create a deeper sense of perspective. This brings Popoff’s narrative to live beyond simply an in-depth examination of each album, but rather, the added element of context and comparison makes for a far more compelling read.

Popoff’s second part of his current trilogy picks up seamlessly where Anthem left off. Emphasising some of the greatest shifts for the band between the changing decades, Popoff is able to analyse Rush at one of their most commercially successful and creatively driven eras, making Limelight: Rush In The ‘80s a sure fire hit among Rush fans. Popoff continues to demonstrate a vast understanding of the band through a massive roster of first-hand accounts to reveal the ultimate behind the scenes experience as to how each album was written, recorded, and eventually received by the public. Whether it’s nostalgia you’re after, or pure curiosity, Limelight: Rush In The ‘80s will make for an excellent addition to your book shelf.

Purchase Limelight: Rush In The ’80s Via