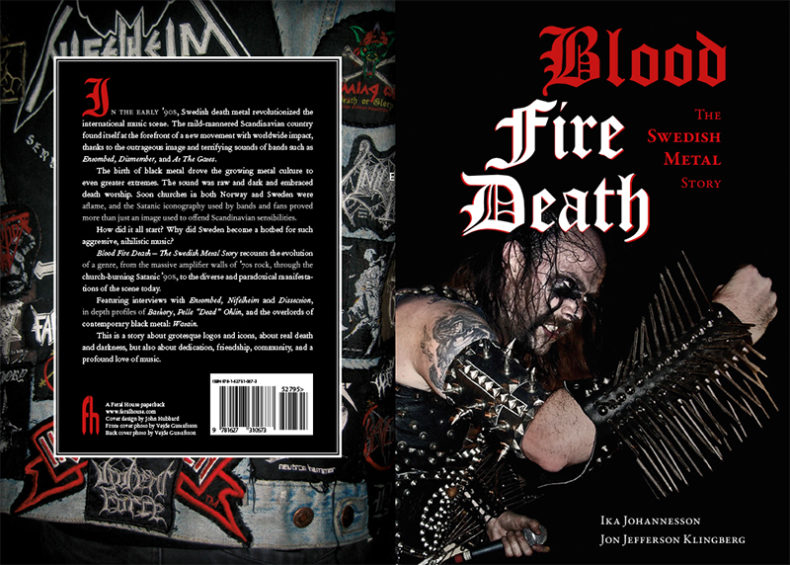 Originally written in Swedish in 2011, this update and translated version is one hell of a book to read. First, I will admit that I do not know a great deal about the Swedish Heavy Metal or Black Metal scene, but I feel like I have learned a great deal by reading this book. I learned about a subculture that involves, and at at times endorses, blood, splatter, gore, suicide, homicide, torture, and other violent acts.

It is a very readable book, full of great stories, interviews, and information. It is near impossible to put down once you start reading. Blood Fire Death – The Swedish Metal Story is a sociological study on a very large subculture that really loves their music. I mean, they really love it. Blood Fire Death – The Swedish Metal Story clearly demonstrates that this is not a simple matter of buying and digging a record or catching an odd concert here and there (although I must admit that a concert featuring the spines of slaughtered cows does sound a bit odd to me). No, this is music that leads people to adopt an entire lifestyle to be part of the scene.

The fact that churches were burned and a fan was murdered turns the amusing subject into something much darker and sinister. That is not to belittle the fanbase about whom the book is written, but at times it is quite amusing. However as the fans get more into the music and lifestyle, the amusement gives way to startled fascination.  Ika Johannesson and Jon Jefferson Klingberg go further into the subject, reflecting on women’s point of view in the scene, as well as dealing with sexuality (Gaahl, an outspoken, self-identified gay musician in the Black Metal scene). This makes for incredible reading.

The authors, Johannesson and Klingberg are journalists and heavy metal fans. When they write about this subject, they have their own personal insight and are able to put things into context. They are not simply exploiting a group of people, but rather explaining and shining a light on a subject not often discussed. This gives them a great deal of credibility with fans, and although they will love this book, it is not written just with the fan in mind. It is written for the public who are unaware of this large movement.

A well-researched, original, outstanding book. Even if you are not a fan of the music, you will enjoy and learn from Blood Fire Death – The Swedish Metal Story.

Born and raised in Whitby, Aaron discovered music through his love of The Beatles. This led to a career in radio, writing for various publications, and ultimately a radio show about The Beatles (Beatles Universe), which ran for over four years. When not immersed in music, Aaron enjoys spending time with the loves of his life -- his wife Andrea, and daughters Emily and Linda (all of whom have an intense love of music too).
RELATED ARTICLES
booksferal house publishers