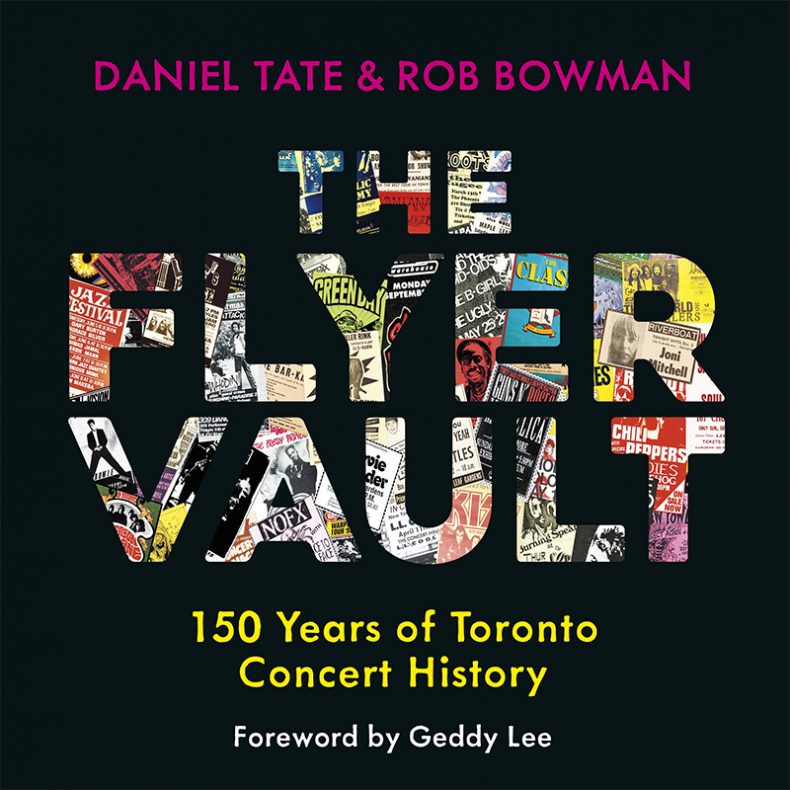 With what first started as a successful Instagram account, Daniel Tate has brought The Flyer Vault to life. Joined by Toronto’s very own Grammy Award-winning author and musicologist, Rob Bowman, Tate dives into the rich musical past of the city in The Flyer Vault: 150 Years Of Toronto Concert History, with a vast collection of posters from thousands of performances along with retellings about the significance of such events. Furthermore, the book boasts a foreword written by none other than Geddy Lee.

Organized into chapters based on genres and eras, The Flyer Vault offers a truly wide range of history ranging from minstrel troupes of the 1800s to the electronic music of today. Through this, Tate and Bowman have made their book feel cohesive for those reading it – and thoroughly enjoying it – from front to back, while making it easier for casual readers to flip through the sections of particular interest to them. Throughout each chapter, you will find an abundance of posters accompanied by Tate and Bowman’s narrative and first-hand accounts. The classic rock chapter is full of stories ranging from The Beatles and The Stones to Bowie while the chapter on hip hop explores classic acts like Run DMC, to the legendary Up In Smoke Tour which featured Dr. Dre, Snoop Dogg, Ice Cube, and Eminem which stopped in Toronto in July of 2000, thus illustrating that there really is something for everyone in The Flyer Vault. As you continue to flip through the collages of posters, one will find the likes of Led Zeppelin, The Red Hot Chili Peppers, Billie Holiday, Tom Petty, James Brown, Tool, and many, many more.

While not a traditional coffee table book, The Flyer Vault, has proven to be as thrilling of a read as it has to casually flip through. Tate’s and Bowman’s narrative tells a story of a city rich in cultural history and experiences. For every “I wish I was there” moment – or even better, a nostalgic, “I remember that night!” – the authors dive into the significance of such concerts, often intertwining the stories of the artists with Toronto’s venues and promoters. The chapters focusing on festivals and The Queen Street Scene were especially interesting and further just that. Ultimately, this makes for a far deeper and compelling look at the vast musical history of Toronto and why it remains as an essential international touring market.

Daniel Tate worked in the concert industry for several years before starting The Flyer Vault project in 2015. His efforts to chronicle Toronto’s live music history have been featured in the Globe and Mail, NOW, Vice, and on blogTO. He resides in Toronto.

Rob Bowman is a Grammy Award-winning professor of music at York University who has been writing about music for over 40 years. His book Soulsville U.S.A.: The Story of Stax Records was inducted into the Blues Hall of Fame in 2013. He lives in Toronto.

Purchase The Flyer Vault: 150 Years Of Toronto Concert History Via

A passion for music has always been a part of Gerrod’s life. As a young boy, he was raised on a steady diet of the music from The Chili Peppers, Aerosmith, The Stones, Prince, and others from his mum. Raised in the GTA, Gerrod continued to foster his love for music by attending a wide range of concerts and learning the drums. His unapologetic passion for music has no bounds and has spread to a wide variety of styles, whether it be the 90’s rock that sound tracked his teenage years, the jazz he studied in university, or his newfound love for hip-hop. He recently received his bachelors in music and education from York University and is passionate about writing and reviewing good (and less than good) music. Gerrod is also the drummer and songwriter for a Toronto based rock & roll band, One In The Chamber.
RELATED ARTICLES
booksdaniel tatedundurn books