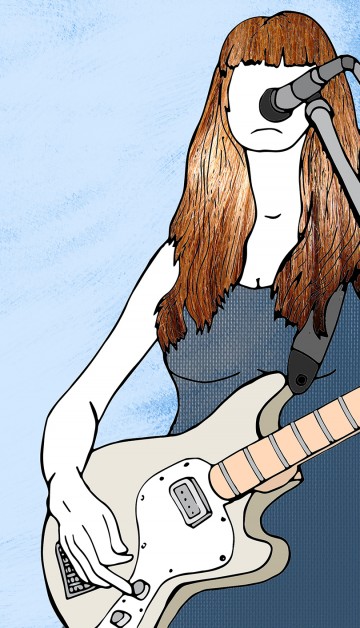 La Sera is the pop rock outlet for Brooklyn bassist and singer Katy Goodman (formerly of all female punk band Vivian Girls), who began writing songs as a solo artist in 2009. Goodman sent early demos of her material to music producer friend and filmmaker Brady Hall (who also shot videos for Vivian Girls). Impressed by Goodman’s use of ’50s and ’60s pop influences and catchy vocals, Hall decided to reproduce the music with Goodman at his home studio in Seattle, Washington. In 2010, after completing the sessions with Hall, La Sera signed with boutique label Hardly Art Records.

La Sera’s first release for Hardly Art was the 7 inch single, “Never Come Around” (2010). The song touches upon themes like heartbreak and death while production offers a dreamy pop sound keeping the song light and tasteful. A second 7 inch was released in January 2011, “Devils Hearts Grow Gold,” with a cover of the 5 Royales “Dedicated to the One I Love” on the B-side. La Sera, Goodman’s debut full-length, was released in 2011 with cover art designed by Vivian Girls bandmate Cassie Ramone and culled from the sessions produced by Brady Hall. Unlike the noise pop of the Vivian Girls, Goodman’s songs featured more of a laid back garage rock influence. On La Sera, Hall’s arrangements are open and direct with layered guitars over ambient percussion creating a soft bed of sonics for Goodman to sing over.

On La Sera’s follow up album, Sees The Light (Hardly Art, 2012), Goodman decided to take on a bigger role in the production. The album finds Goodman writing the songs, playing bass and singing all the vocals. She also enlisted Rob Barbato of the group Darker My Love to co-produce and play guitar. The result is a louder, more punk influenced record with Goodman’s voice taking center stage. On this release, Goddman proves she can handle front woman duties with ease.

For La Sera’s third release, Hour of The Dawn (Hardly Art, 2014), Goodman partnered with guitarist/producer Todd Wisenbaker. The duo’s approach resulted in a dreamy power pop album filled with fiery guitar licks and catchy choruses. Wisenbaker’s production style is clear and simple, allowing Goodman’s vocals to shine through in the mix. Critics are calling Hour of The Dawn La Sera’s best and most fully realized album yet.

La Sera’s Music For Listening To Music To is due out March 2016 on Polyvinyl Records.

Daniel is an illustrator/graphic designer based out of Austin Texas. He graduated from Pratt Institute with a Bachelors degree in Illustration and an Associates degree in Graphic Design. Daniel started his career in graphic design in the world of online casinos. Since then he’s worked with various clients from around the United States and Canada including but not limited to NHL, Subway, Paraco Propane, Pitney Bowes, Xerox, Conduent, Nestle Waters, The Spill Magazine, Stamford CT’s DSSD, Beechnut Baby Foods, Elizabeth Arden and much more.
RELATED ARTICLES
daniel adamsla seraportraits