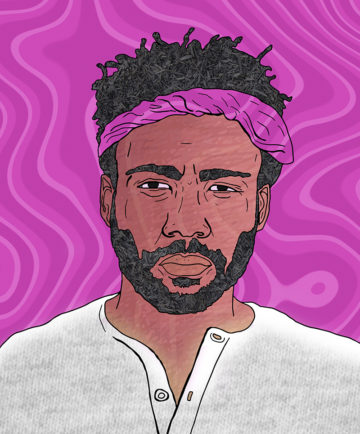 When he’s not busy writing for television, performing with his sketch group Derrick Comedy, or acting on the NBC comedy Community, Donald Glover somehow finds the time to make beats and rap as his alter ego, Childish Gambino. The project took on a life of its own after Glover found someone to rhyme over the beats he’d been making in his spare time. In 2008, he released his first record as Childish Gambino, Sick Boi, and followed it up the next year with Poindexter. In 2010 he released two mixtapes, I Am Just a Rapper and I Am Just a Rapper 2, which found him rapping over indie rock gems like Sleigh Bells’ “Infinity Guitars” and Grizzly Bear’s “Two Weeks.” Later that year, he released his third full-length underground album, Culdesac. The year 2011 found him going legit with Camp, his official debut for the Glass Note label. In 2012, Glover released a mixtape titled Royalty, which he released as a free download and which featured a range of musicians including Beck and Das Racist’s Heems. He also appeared on Leona Lewis’ track “Trouble” from her album Glassheart. In 2013, Glover revealed he had left Community, but would still appear in a handful of episodes in Season 5, and he concentrated on his music career. He returned again to music as Childish Gambino and released the single “3005” from third album, Because the Internet, which was released in late 2013. In 2013 he  announced a new album titled Because the Internet and revealed that it would be released in December of that year. Glover was nominated for two Grammy Awards. He was a contender for Best Rap Album for Because The Internet (Glassnote Records) and Best Rap Performance for his single, “3005.”

On March 21, 2015 Glover won an mtvU Woodies Award for Best Video Woodie for the song “Sober” from the Kauai EP. As of February 2016, Because The Internet has been certified gold by the Recording Industry Association of America for shipping over 500,000 copies. In June 2016, Glover was cast in Spider-Man: Homecoming, although his role has yet to be disclosed. Later that month, Gambino released an app titled “PHAROS Earth,” allowing fans to purchase tickets to a listening event of his new album scheduled to release in September. The listening event took place in Joshua Tree, California. Glover’s television show Atlanta premiered September 6, 2016 on FX. On October 21, 2016, Glover was confirmed to be playing Lando Calrissian in the 2018 Untitled Han Solo Star Wars spin-off. Glover has now revealed that his new album titled Awaken, My Love! will be released on the December 2, 2016.

Daniel is an illustrator/graphic designer based out of Austin Texas. He graduated from Pratt Institute with a Bachelors degree in Illustration and an Associates degree in Graphic Design. Daniel started his career in graphic design in the world of online casinos. Since then he’s worked with various clients from around the United States and Canada including but not limited to NHL, Subway, Paraco Propane, Pitney Bowes, Xerox, Conduent, Nestle Waters, The Spill Magazine, Stamford CT’s DSSD, Beechnut Baby Foods, Elizabeth Arden and much more.
RELATED ARTICLES
awaken my love!childish gambinodaniel adams
9.0